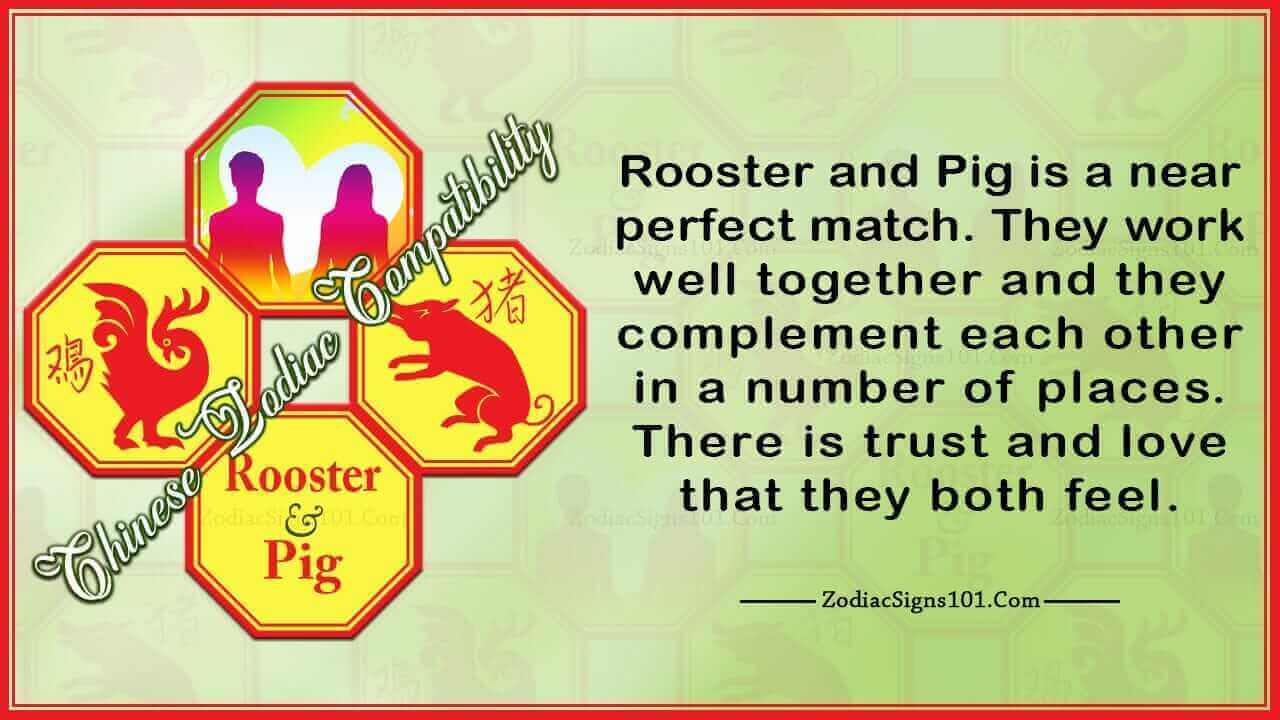 People born under different signs of the Chinese zodiac work together – or don’t – in different ways. So what is rooster pig compatibility like?

Roosters are very proud people. They are eccentric enough that it can cross the line into being flamboyant. They are amazing at managing time and keeping things as neat as possible.

People born in the years listed above are not the best at communicating. However, they can get the point across even if it is bluntly honest. When a Rooster knows what they are doing and have their feet firmly where they need them, they can turn the people listening to them into putty. These people are full of energy. This can help to be such strong leaders because the energy can get others going as well.

Roosters make great leaders and business people. They are also some the best the entertainers you can imagine (singers, actors, etc.). These people are caring, loyal, and sensitive. They take compliments from others to heart, ignore criticism as best they can, and may make fun of themselves at times. The aforementioned pride can weigh in on things. Usually, the more prideful or built up they are, the more emotional they tend to be.

People born in any of the years listed above are born under the sign of the Pig. Pig People are fairly passive people. Their passiveness can be taken for laziness at times. Pigs are not ones to get worked up over much of anything. They are still rather independent people that try their best to look on the bright side of things. They are considerate of others and they do what needs to get done. These people are loyal, gentle, and honest but they can also be naive and impatient.

When it comes to Pigs, they are some of the most stylish people you can meet. They are hardworking perfectionists. These people are very caring and take joy in making sure that people know it. They are highly affectionate people both in verbal and physical communications. Pigs are so affectionate because they have a good deal of self-doubt, so they make sure that others know they are loved and wanted in hopes of keeping them from feeling the same self-doubt that they do. Despite how caring and loving Pigs can be, it is important that you do not upset or get on their bad side. It can take them a while to forgive and they are not ones to forget.

Rooster Pig compatibility makes for a pretty fun match because there is plenty of energy to go around. Even though Pigs can be highly passive, that does not mean that they do not have a lot of spirit. There is a lot of balance that goes into play with a relationship between a Pig and a Rooster.

Roosters always need to be in control so that they can run the show. Pigs are usually along for the ride as long as they get an equal say in where the show is going. Pigs want to be heard, but they do not care about who is “leading”.

Both parties of this match are very loving and devoted to their partner. There is a good level of trust that comes from both sides. While Roosters can be pretty demanding, Pigs are okay with it for the most part. It should be kept in mind that Pigs are passive people. They are not passive because they do not care, they are passive because they do not want to hurt anyone. If bringing up the idea of changing something would offend someone, they do not touch it. That works well with the Rooster because they like to have the final say in whether or not things change. However, it is important for the Rooster to remember that the Pig does want a say.

Pigs are very giving people. Roosters can be a little selfish at times. This works oddly well for rooster pig compatibility. When the Pig is giving the Rooster something, whether it be advice or a gift, they feel that they can help the Rooster and the Rooster feels loved and appreciated.

Roosters like to save as much money as they can. Pigs like to spend a little too much money sometimes. Roosters are amazing at organizing things and money spending is one of those things. If they think the Pig is spending too much, they will tell them and suggest a different way of doing things.

It sounds like Rooster and Pig couples are made in Heaven. However, there is some space for arguments.

Pigs are not perfectionists, not everything has to be perfect and they are okay with this.
Roosters, on the other hand, are very strict when it comes to perfection. Everything has a place and has to be done in a certain way. Roosters can sometimes overpower how the Pig feels and they fight tooth and nail to stay at the top.

Pigs do not care about being on the top. They care about being heard and about being able to be themselves. Remember how Pigs worry about accidentally hurting someone? Roosters are the exact opposite and will bluntly confront someone- including their Pig. The Pig can have a problem with this and they will fight back if it goes on for long enough.

Rooster and Pig is a near perfect match. They work well together and they complement each other in a number of places. There is trust and love that they both feel. Pigs give to Roosters to feel like they are helping more and Roosters feel loved. They get along and stay true to each other.

The two just need to remember the other’s personality and they should be fine. The Rooster can not boss the Pig around in every situation without asking them what they think. The Pig should be mindful to not spend too much money where it does not to need to be spent. The Rooster should also remember that the Pig can be sensitive and to be more caring and approachable when they confront the Pig with something.