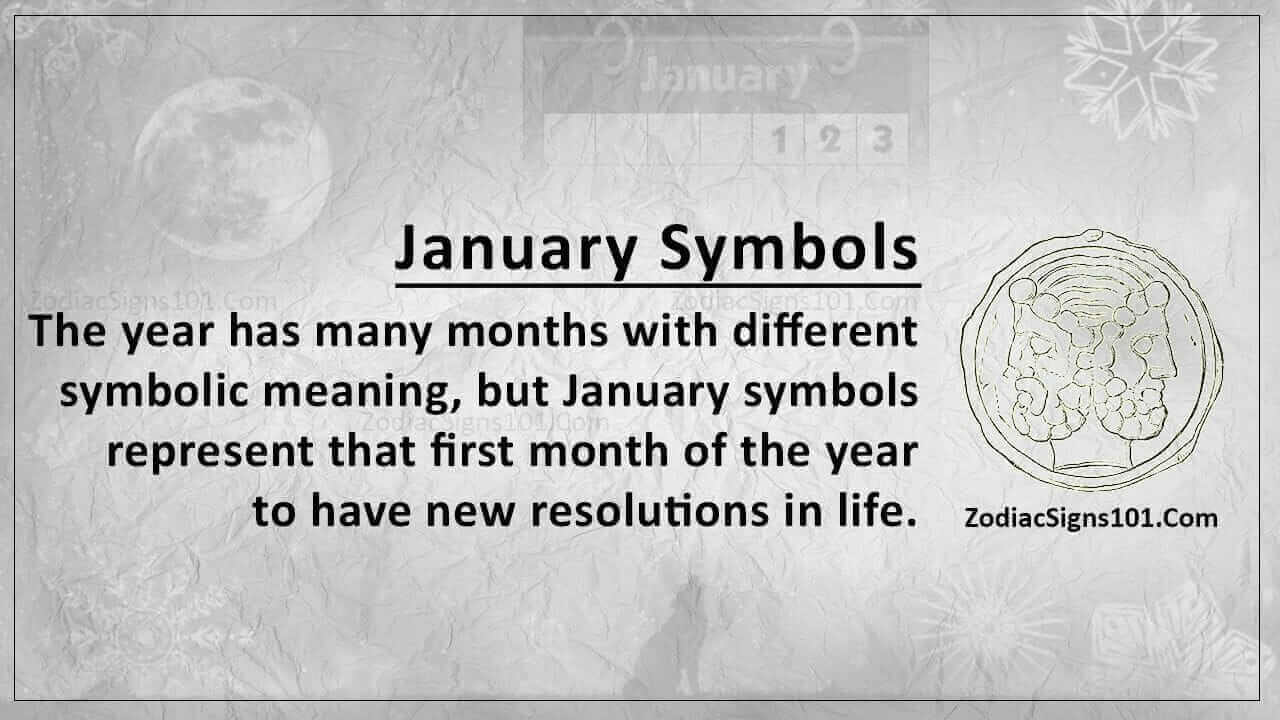 January Symbols: The Time of the Year to Form New Resolutions in Life

The year has many months with different symbolic meaning, but January symbols represent that first month of the year to have new resolutions in life. January is not one of the best months despite it having the last happy holiday, The New Year. Therefore, I can always say that it is tough on me, especially in term of adjusting back to the usually year life.

It is the time that many people are coming up with ideas on how to do better. At least this tends to keep people on toss as the month progress. I want to look at it as the transition month besides it being the first month on the calendar. Also, it is the month that influence that people that were born under using the Zodiac sign Capricorn and Aquarius. The month of January was prominent to the ancient Romans.

The Etymology of January Symbols

January is an English word that comes from the Roman term of Janus.  Janus was the Roman god who was responsible for things like the door, arches, doorways, openings, and exits. In his pure form, Janus was a two-faced deity. However, this may depend on the source material that you are using for reference. Janus had the power to see both the past and the present, and future. As the month of new beginnings, January meant a lot to the Romans. Also, it signifies the time that you have spent in the previous years to that point.

So, Janus can make a decision based on your previous life and then forecast the possibilities of the future for you. Some people chose to see Janus as a doorman that let you reflect on the matters of the past as you look forward to the future. However, Janus is the one that knows all the possibilities that you are having in the future. If you believe in the powers of god Janus, you can have the insight to see both the past and future. That way you can do what is best for you and your future. On the other hand, you can also practice meditation to help you channel the power of Janus.

January Symbolism: Symbols of January and their Symbolic Meaning

The Symbol of a Garnet

The garnet is one of the symbols that touch on the inner meaning of January. Through its purpose, it also helps to bring out the hidden sense of January. This symbol means seeds. Besides, January is the month that is about people use to make new year resolution and stick to them, therefore; they are taking their time to plant seeds of new goals, idea, and desires for the new year. Since December was such a dark month, the garnet is a stone of many colors reminding that it is time to have some new light in your life.

The Symbol of the Wolf Moon

As per the belief of the Native Americans, they pay tribute to the phases of the moon on each month of the year. This is because they had the thought the steps of the moon could affect the personality of people. Some even gave January the name cold moon month. This was because it was the time for the wolves to roam around. It is the time of the month that the wolves would perform their loudest howls. Some even believe that it’s this time of the year that they were wolves would come out and run amok. On the other hand, this would be the time of the year that the other wolves would challenge the pack leader for authority.

The Symbol of Carnation

The Representation of the Zodiac Symbols in January

Is January your birth month? Well, if it is, then you are probably falling under the zodiac sign of Capricorn and Aquarius. Here are some of the meanings to the signs that you belong to.

If you belong under this sign that you are probably one of the lucky people. Because the sway and influence of this sign will bestow upon you the traits of ambition, responsibility, and discipline to top it up. You are most like the kind of person that has a good sense of self-control. However, sometimes, due to your strict nature, you tend to come out as rigid and condescending. On the other hand, you are a good boss that always see the work done.

Well, this is the symbol for the humanitarians, independent and original in their way. If you were born under this sign, then you have a tendency to be smart and an intellect. So, you have the habit of looking for things that are mentally stimulating like puzzles. Therefore, they are good at solving problems. In most of the cases, they will always want to lend out a helping hand to their friends. They tend to be shy around new company. So, they may seem unbothered and cold. Although ones they trust you then you become of their best friends.

Living under the spell of the power of January can make you change your life forever. It offers you the peek to the past and the future through god Janus. Therefore, you can be able to predict the harmful patterns that you have and avoid them. It is also the time they signify to the world that we can move one to the light. The dark and cold times of December is over. Therefore, we need to focus on the future that we have.