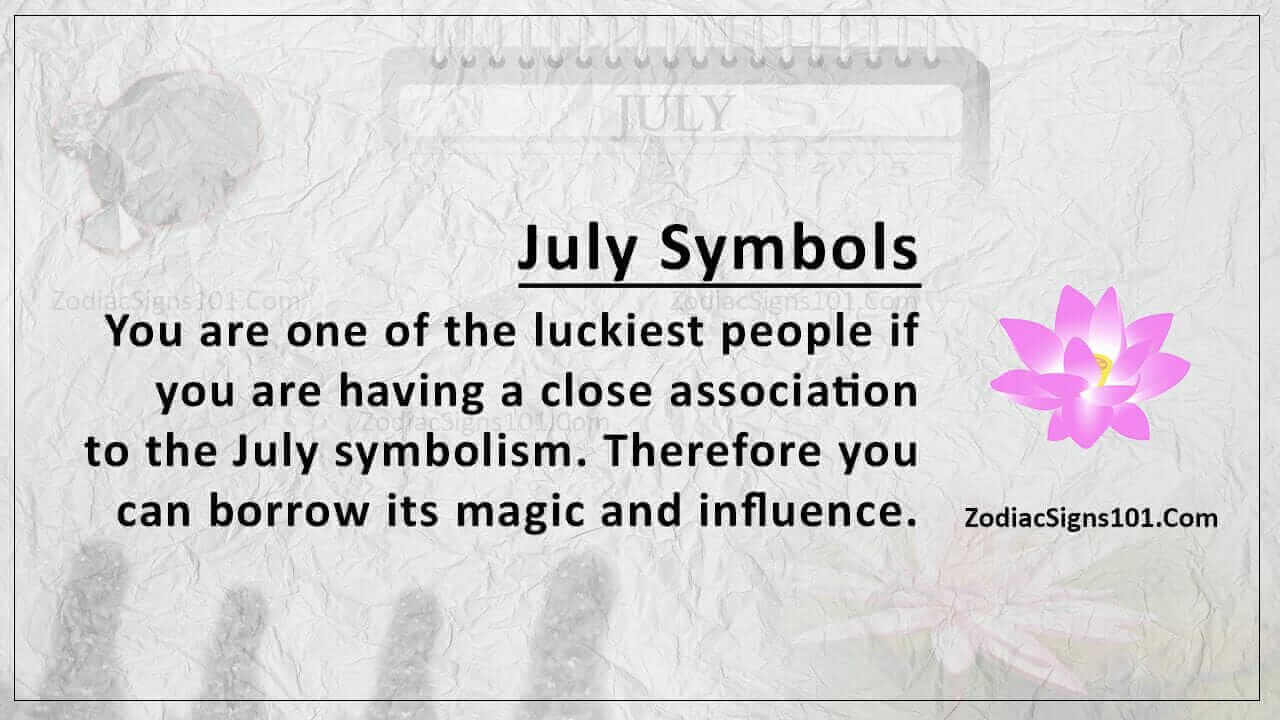 July Symbols: Are you One of the Lucky Ones that was Born in July?

You are one of the luckiest people if you are having a close association to the July symbols. Therefore, you can borrow its magic and influence. Moreover, July is the time of the year everything is hot and warm. It is also the time for the school holidays. Therefore, families are trickling to the beaches to spend time together. On the other hand, they are some kids that are spending their time at the summer camps. Most of the people will prefer going out to swim during this period and spend their time outdoors. Generally, it is the month for most people to have lots of fun.

In a way, the warm season helps the people to find their way back to reconnect with nature. I prefer to go on a hike during such periods. However, I don’t mind the notion of going out into the woods to camp with friends. Some people think that July is the time of the year to reflect on your life. It will also help you regain focus, but after you have had time to unwind. This means that you need this time of the year to take a step back and rejuvenate. After that, you can continue your journey into the rest of the year. I tend to think of July as more of the period of the year to celebrate.

The Etymology of July Symbols

Just like the rest of the months, July was also a term that came from the ancient Romans. I want to think of July as unique because it got its name from one of the Roman deities. However, it was given its name in the Roman senate. They decided that they would name the month of July after one of the greatest Roman Emperors, Julius Caesar. This was because Julius was born in July.

However, the ancient Roman previous knew Julius as “Quintilis.” The name was a Latin term that bears the meaning of fifth. At the time, the month of July was the fifth month of the ten months of the year. Previously the month was under the rule of the Roman god Jupiter. Jupiter was then the Roman god of light. That is why he had an association with July that falls in the summertime.

July has multiple symbols that lend their influence to its final meaning. Also, it has the Zodiac sign the also represent the people that are born in that period. Here are some of July’s symbols.

The ruby is one of the stones that have a great influence on the people that are born in July. This is because the ruby has that bold and regal look about it. These are some of the best qualities that the persons that are born in July do enjoy. Also, the ruby’s special shine relates well with the symbolism of summer. The summer is the season that comes around July. This is one of the reasons that make the ruby stone one of the special stones of July.

The Flowers Symbols of July

The month of July also has various flowers that represent its special nature to the world. Here are some of the flowers.

There is a certain sense of elegance when you look at the Larkspur. They have long stems and large petals always drawn in your attention. This in itself gives it the real glory of the summer and July meaning. You will also get to notice that the flower stem has up to twenty flowers. The most amazing thing about the larkspur flowers is that it has a variety of colors ranging from purple to pink. Some people believe the larkspur flower represents the boldness of July.

In some retrospect, the water lilies are the epitome representation of the meaning of July and summer. They have a natural, peaceful demeanor about them that will appeal to most people. They also have a graceful posture that makes them more appealing while resting on their green pads.

In the matter of learning the two main signs of July, you will need to learn and understand zodiac signs, Cancer and Leo. Through these signs, you will also get to understand the true meaning of July. Also, you will get to learn the importance and traits of the people that were born in July. 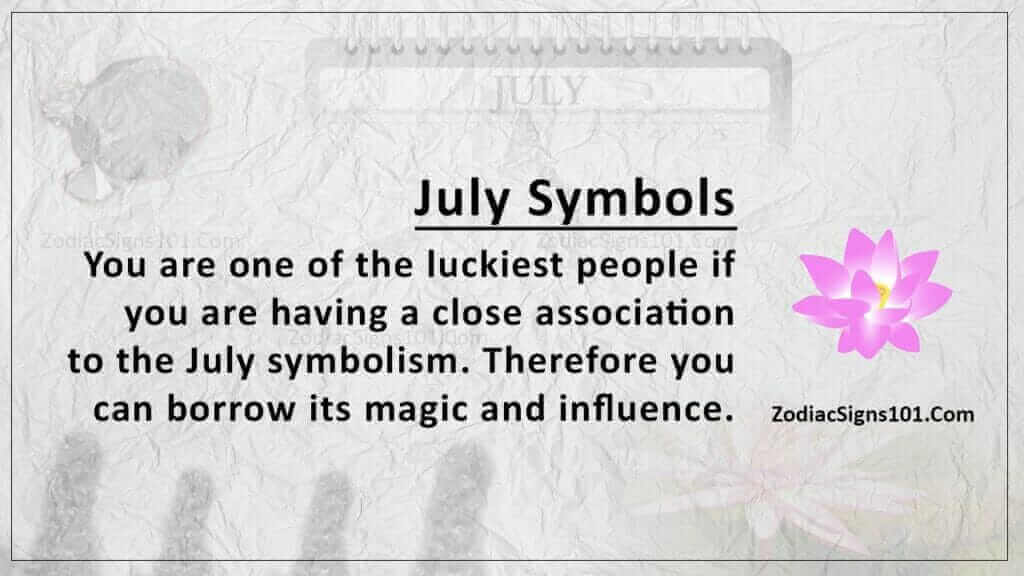 Anyone born in the period between the 1st of July and the 22nd is members of the Zodiac Cancer sign. The sign usually depicts the people born in this period as emotional. On the other hand, they can also be impulsive and reckless. If there are not directly involved in issues, they can be good diplomats. I believe that they have such diplomatic skills because they are quite selective. To many people, they may come out as intimidating. However, if you get to know them, they are pretty nice people.

The Leo’s have the remaining nine days of July. Like the animal that represents them, the Lions are best known as rulers and ample good leaders. They are intimidating, but like the cat can be quite playful. In some circle, they are generous and love the notions of protecting their interest and loved ones. Discipline is one of the hugest driving force in life. It is not a coincidence that the lion is their symbol as this is the peak of summer when the sun is fully out. Also, remember that the lion is the symbol of the sun due to its magnificent mane and color.

Being born in July makes you one of the luckiest people. You have the opportunity to enjoy all the influence that the universe has laid for you. Plus, if you are lucky or wise, you can model your life around the aspects and symbolism of July to come out on top of others. This means you will be a good person with a warm personality towards many people. Also, they will look up to you for guidance due to your leadership skills. Moreover, most of these traits will come naturally due to the influence of the cosmos. People even go as far as channeling the spirits and the power of July.