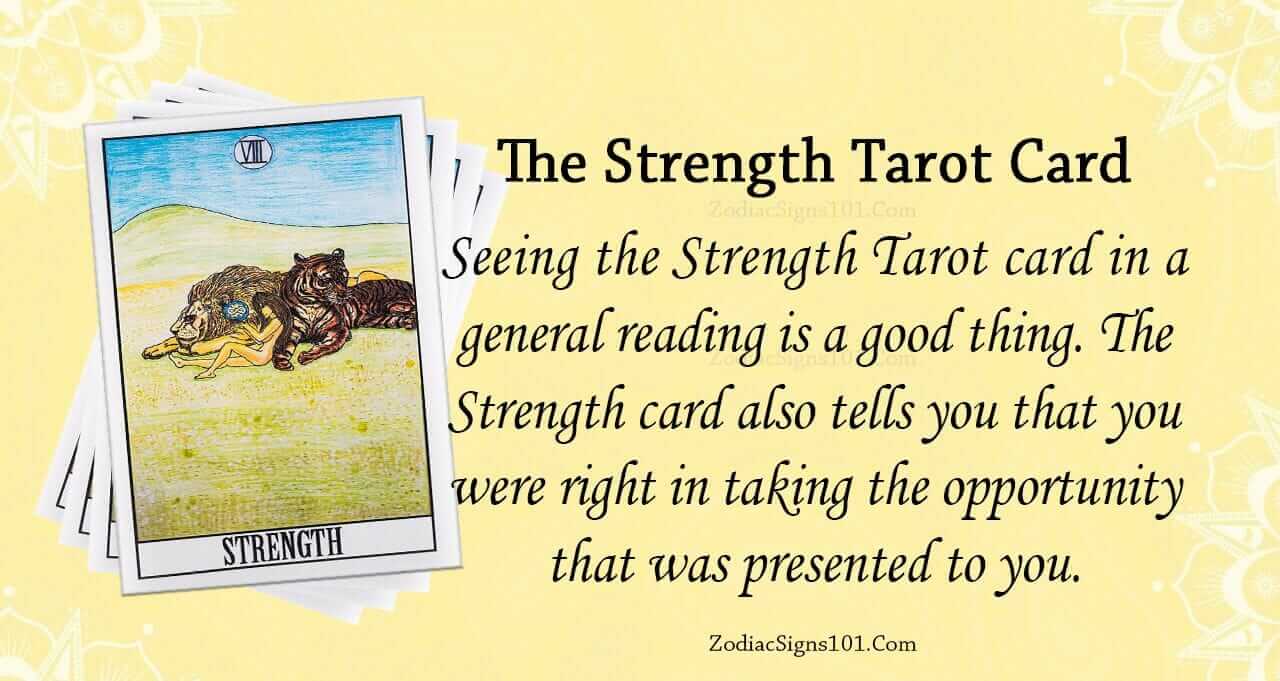 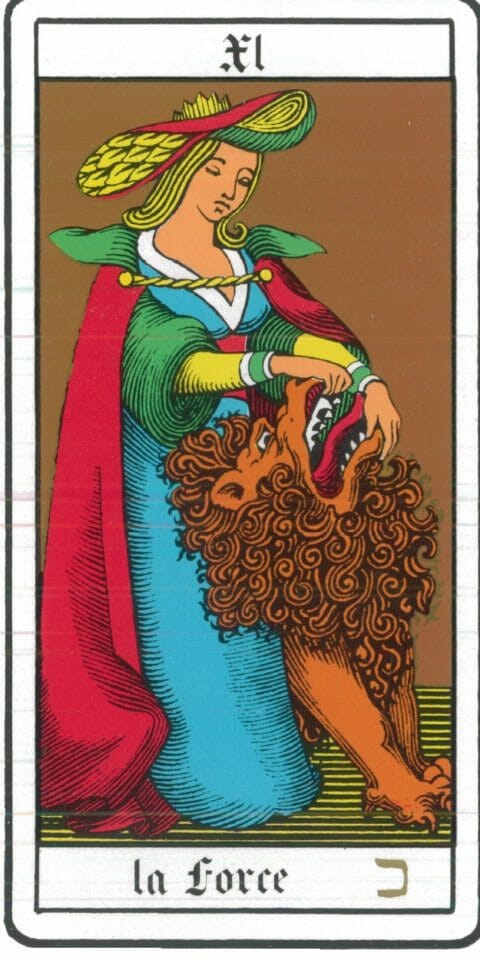 While some people are strong in the sense that they can lift heavy things, others are stronger in spiritual ways. It is also important to remember that physical and spiritual are not the only ways someone can be strong. There are almost countless ways to have strength. Strength can also come in understanding that there are things on Earth that are stronger than humans and seeing that there are more important things in the world than money and things you can collect.

Lions have been seen as mighty beasts for ages. You have lion tamers at circuses and the stories of this giant beast being the king of the jungle. That is why this card means there is strength or victory. A human would need to have lots of strength to overcome a lion. 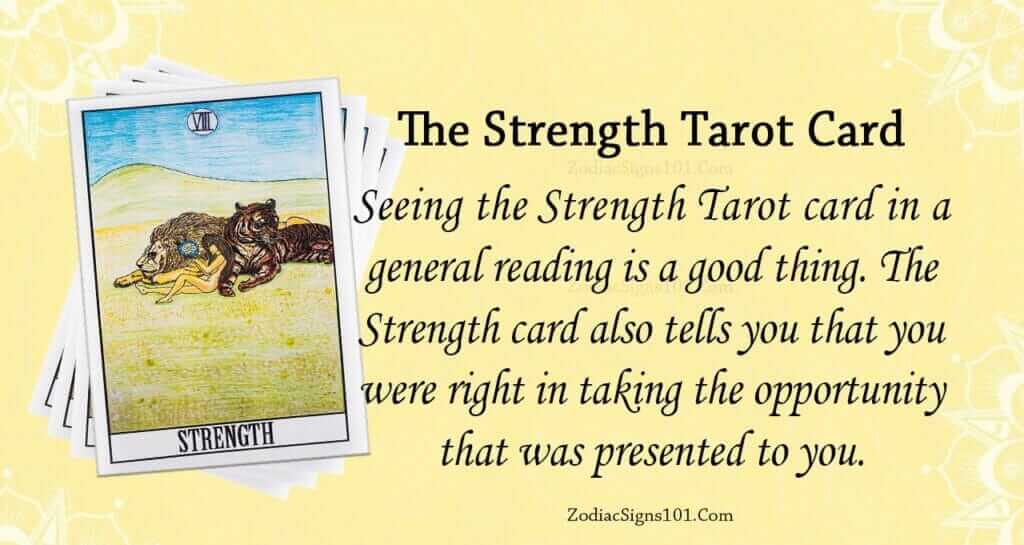 Seeing the Strength Tarot card in a general reading is a good thing. It means that you have reached a triumph that was hard for you. The Strength card also tells you that you were right in taking the opportunity that was presented to you. This card can also tell you that someone is either going to come and make amends with you or that you have succeeded in making amends with someone else.

When you see this card upside down or reversed, it is not the greatest thing to see. However, it is not a bad omen. You have missed an opportunity you could have taken. Otherwise, there is some defeat that you have recently experienced.

When all is said and done, the full meaning of the Strength tarot card comes together based on the cards around it. This card can mean that you are going to be seeing an increase in energy or vigor. It could also mean that you need to be kind and caring to someone soon. Maybe you are not using enough logic to solve a problem so you need to strengthen your mind.

The Strength Tarot card could also be a warning of sorts. Something or someone is going to challenge you soon. You need to stand your ground. Strengthen yourself emotionally so that this person or event cannot put you like they or it will try to.

When it comes down to it, the meaning of the Strength tarot card depends on the person doing the reading. Some people do not really know what it means and it confuses them. However, some readers get the feeling that something in the relationship is not fair. You are the only one that is really trying. Your partner is not putting in enough effort and it relying on you to do all the hard work and reaching out.

If you feel that is not the case, there are other meanings that this card has. It is possible, if the relationship is a happy one, that you need to tend to your partner soon. They are going to fall ill and need to rely on you to help them when you can. If you are wondering how someone feels about you and this is the card you get, then they care about you but you need to be careful. This is because they enjoy you chasing after them a little too much.

If you see this card in a reading about your job, then get reading to kick things up a notch. This does not mean that things are going to be going away. Rather, you are going to be putting 110 percent into your work for a while. Instead of Strength promising success, it simply means you are going to be working extra hard. Maybe someone just got laid off and someone needs to pick up the slack around the office until a new person is hired on.

Even if you get this card as a result in your reading, it is not a bad thing. You might not have the win you are trying for, but you will get a feeling of victory. This is because of all the work you put in in your attempt.

If you are ill, whether or you just becoming ill or have been for a while, this card is one you will want to see. You are going to be okay. The medical treatments, if you have been the hospital, maybe scary and taxing, but you will come out the other side. You need to keep strong.

If you are not yet sick, this card is a precaution. Yes, things have been tiring. If you have been helping others you could be almost burned out. The Strength Tarot card is telling you that it is time for you to take a break. You will be unable to help others if you run yourself into the ground. Take a day for yourself. Sit around the house drinking hot cocoa and playing video games, read a book, whatever it is you need to do in order to rest up.

As mentioned earlier, strength can come from caring for others. Readings about family and friends are where the meaning really comes in. Someone you care about is going to fall ill soon and they are going to need your help. The person might not be sick, but simply under your care for a while. Perhaps you are going to be taking care of a relative that is mentally impaired or you are visiting a grandparent who needs your help around the house while you are there.

Remember that while these things are easier for you than they are for the person you are with. You are being strong for them in a way that they can not be. However, this does not make that person weak. That is also vital to remember while you are with the person.

A lot of people think they are weak if they are unable to do a pullup. However, that is not the case. That is what the Strength Tarot card is all about. You are going to find, through this card, that being strong can be seen in helping others around you, being spiritually aware of the world and its secrets. So while things might not be ideal, you can still be strong in any number of ways.

If you are helping someone with something, that does not make them weak. The classmate in a wheelchair you helped to school this morning might help you study for a test. This card tries to show you need to be stronger, that you are going to see a victory soon, or that you will be working harder than usual.