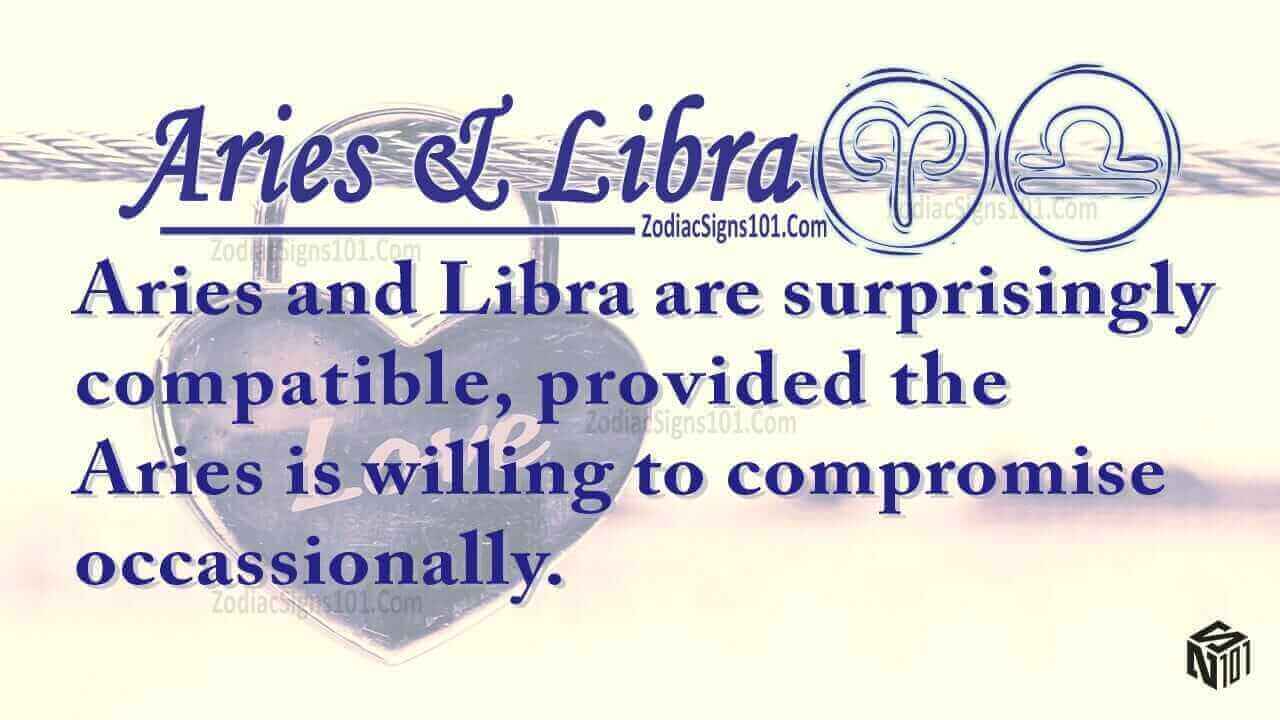 How compatible are Aries/Libra relationships?  Will they be able to connect on all levels or will they struggle to find any common ground? In this article, we’ll answer these questions.

Some of the most recognizable characteristics of Aries (March 21 – April 20) is how they make themselves known in a crowd.  They have a charm and charisma that attracts others to them at work, home, and play.  Mars is the ruling planet for this zodiac sign and is named after the Roman god of war.  They’re natural leaders and work hard to make their ideas come to fruition.  If they’re the ones coming up with the next great idea, they’re also likely to manage the project despite any potential risks.  They make decisions with confidence but can sometimes be stubborn when someone isn’t on board.  Aries also has a passion for adventure and holds strong to their independence.

Libra (September 24 – October 23) also likes to be with people and communicating with others.  Libra is ruled by the planet Venus.  They like to take care of others and work with others on the same goal.  However, if someone else wants to step in on a task, Libra has no problem letting them take over the work.  Routine can be monotonous to a Libra, and they love to try new things and see new places.  Those born under this sign are often optimistic which keeps them and those around them in a positive mood.  They love romance and falling in love, which makes sense with its ruling planet being named after the goddess of love.

Even though the personalities of Aries and Libra are very different, it can actually work to their advantage.  It’s their strengths that can boost each other, particularly in their weaknesses.  The symbol of Libra is the scales, and these opposites will find their balance in their relationship when they work together despite their challenges.

Positive Attributes in an Aries/Libra Relationship

Both Aries and Libra are hardworking individuals.  They understand that the rewards of their hard work are the luxuries and fine things they want in their lives.  Even though they both see that quality in each other, they also know that all work and no play can affect their relationship.  Aries knows how to balance work and play as well as spending time with Libra who could use the down time as well.

Balance starts from the beginning of the dating experience between Aries and Libra.  Aries brings in the confidence with a bit of swagger while Libra complements these advances with tenderness and charm.  Libra loves people for who they are, and when it comes to their Aries partner, it’s not their goal to change who they are.  In fact, they will do what they can to support Aries in their endeavors.  This support can take the form of contributing feedback to the next project or helping Aries find patience before jumping into a plan that has not been carefully thought through.  Aries can help Libra commit to a decision as decision-making is one of Libra’s weaknesses.  The same is true for procrastination.  Since Libra likes working alongside others, Aries can motivate Libra to be more assertive and see a goal to the end.

The sexual connection in an Aries/Libra relationship is a strong combination of intensity and affection.  Aries has the passion to demonstrate love full of energy and fire while Libra embraces each moment to show their love and devotion.

Negative Attributes in an Aries/Libra Relationship

Though some of the opposing characteristic traits of Aries and Libra complement each other, there are other habits and parts of their personalities that conflict and affect their love compatibility.  For example, Aries wants to be in charge for many of the activities and goals while Libra would rather do it together as equals.  There are times, however, when they cannot complete those tasks and have to break a promise.  This can be due to Aries getting in over their head or Libra and their procrastination.  They can also lose interest if they get stuck in a relationship rut.

Arguments between Aries and Libra can get ugly.  Both want to be in charge of the relationship, and they may use some tactics to get their way.  Libra wants to keep the balance so that they can get back to being agreeable, but Aries wants to prove that they’re right and will be stubborn about it.  Love may become the wild card used to win the argument.  Giving in to Aries’ side may be Libra’s way to bring peace to the couple again.

There are some concepts that Aries and Libra may never agree on.  Even though they’re both giving people, Aries focuses on themselves more than they do to the greater good, something that Libra is a champion of.  Libra may see Aries as more selfish while Aries may be concerned that Libra isn’t strong enough and manipulated due to their generosity.  Rather than create an argument that may not change their minds, both Aries and Libra can try the other perspective to give more or less respectively.

When it comes to compatibility, these two signs can learn a lot from each other to grow as people and nurture their love for one another.  Aries can learn to look at how they can be a part of the world as a whole and how their strengths can be used to benefit others as well as themselves.  Libra can focus less on the details and more on the joys of living that they can experience.  Their compatible partners can help show them that potential.

Aries and Libra can also find joy with each other as they can demonstrate their love with passion and tenderness.  They will look forward to seeing each other at the end of the day and taking care of each other’s needs.  They can encourage each other and watch their love for one another grow into something very special.

Yes, there will be arguments and disagreements, but in most cases, Aries and Libra need to agree to disagree.  Libra will love Aries for who they are and Aries will discover that they may not always be right in everything.  It will take compromise and consideration to make these minor conflicts work out.  Still, they’ll find that they have enough in common to enjoy their adventures together to keep their routines and their relationship from ever getting dull or out of balance.