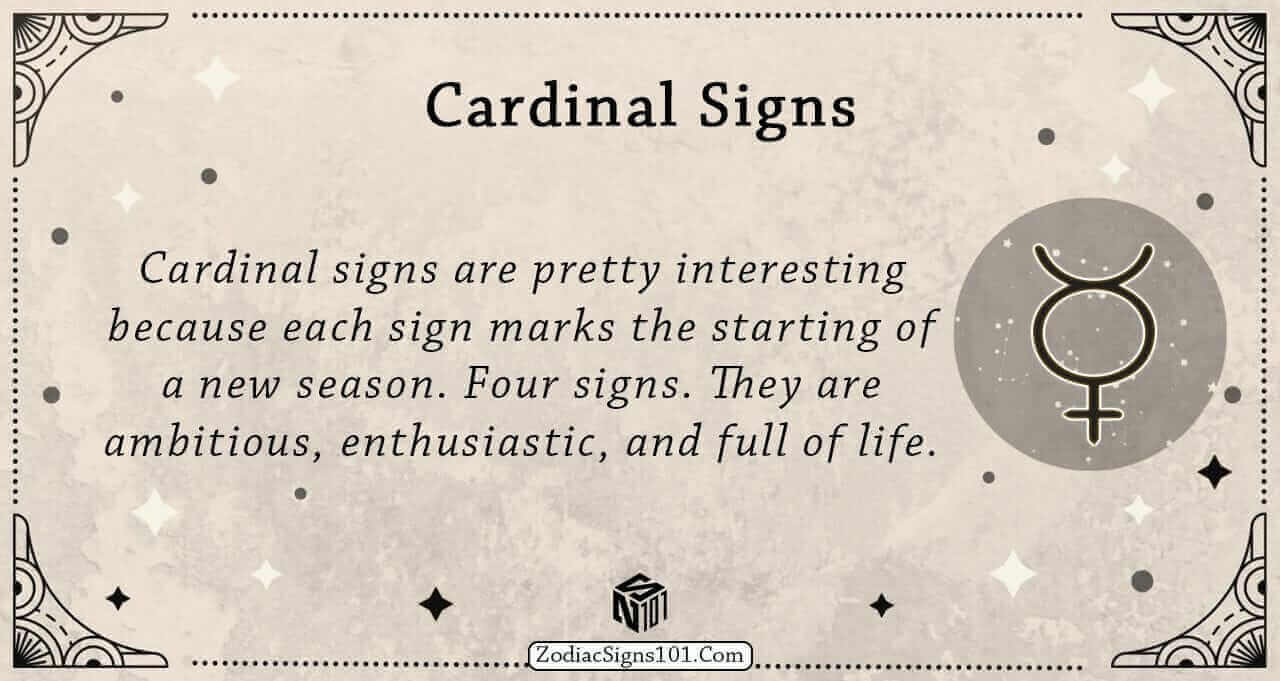 There a number of different groups or classes that people are in when it comes to Astrology. The Sun and Moon signs, the elements, planets, houses, and there are a few others. This article is going to focus on one of the Qualities: Cardinal signs.

Along with the Cardinal Quality, the other two Qualities are Fixed and Mutable. Since there are three Qualities, there are four signs under each. These Qualities give some insight into how the signs get different things done, where they get their motivation from, and how high those levels of motivation are. 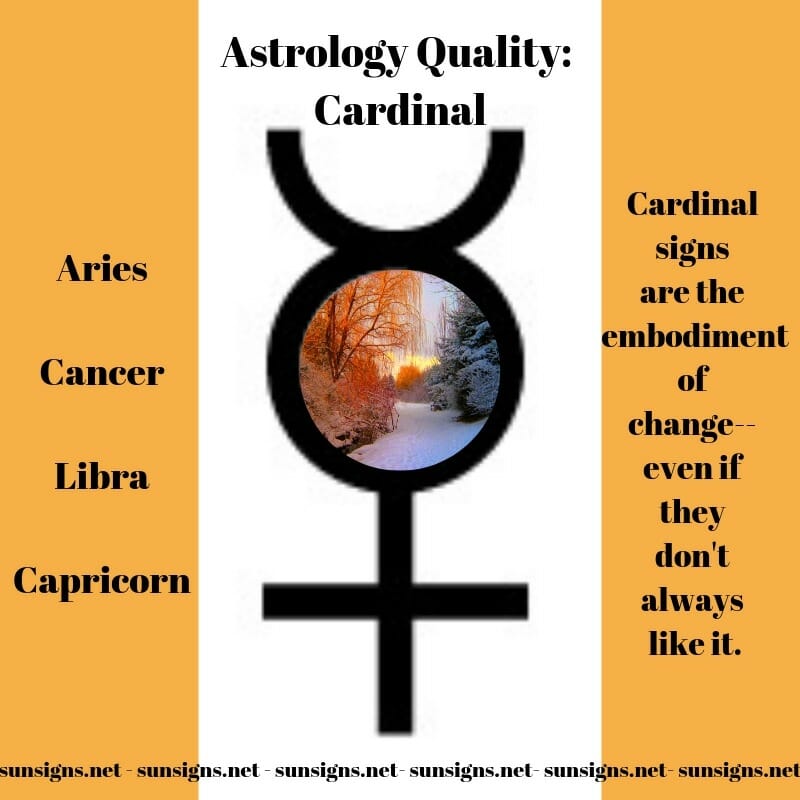 What are the Cardinal Signs?

The four Cardinal signs are Cancer, Capricorn, Aries, and Libra.

What Sets the Cardinal Signs Apart from the Others?

Cardinal signs are pretty interesting because each sign marks the starting of a new season. Four signs. Four Seasons. These signs, for the most part, are strong go-getters that blaze their own trails and are not likely to be held back and yet still manage to be very punctual. They are ambitious, enthusiastic, and full of life.

While these people might be good at getting to where they have to on time, they can sometimes have trouble getting a project completed. They have no trouble starting things but finishing things can either take a while or just does not really happen. Sometimes, Cardinal signs will a project started and then pass over the end of it to someone to finish it. There are even times where they do not totally want to be part of the project and just see a group struggling to get the project off the ground; they help them get it going then excuse themselves.

These signs are also deeply passionate. It does not matter what is going on. A relationship, a friendship, a new project, someone needing help. They want to be in the middle of the front lines so they can do their best and lead others to do the same.

Always wanting something new can make Cardinal signs really impulse, but it also makes them great at adapting to new places, times, and settings. They are incredibly brave and dedicated so that can make the people you do not want to try messing with.

Aries is the first of the four Cardinal signs as well as the first Zodiac. Thereby, it is connected to Spring (in part because of how close some Aries are born to the Spring Equinox).  Aries is under the element of Fire and Ruled by Mars. People born under this sign are strong and free-spirited but this can sometimes get them in trouble.

These people have an energy that can make them want to get things done as soon as possible so that they can move onto the next project. It is not that they are being impatient like other signs may think, Aries just see it as being efficient. When told of a new adventure they can seem to bounce with the excitement of starting something new.

The Cancer Zodiac marks the beginning of Summer and is under the element Water while being ruled by the Moon. Cancers greatly enjoying getting out of the comfort zones and can sometimes get other signs to go with them. Cardinal and Water working together is a powerful match because it makes people emotional because since they themselves are emotional they know how to emotions against other people.

These emotions are usually what drives a Cancer in their actions but it can also lead them in or to their motives. While it does sound like Cancers are extremely cunning, they can also be highly sensitive at times.

Libra is ruled by Venus, is under the element Air, and it is at the start of Autumn. Libras are an endless supply of new ideas, creativity, and a strong sense of balance. Because of these ideas and creativity, Libras are good at socializing and they can help different groups of people to come to middle ground or compromise.

Libras differ from Aries in the sense that when they start a project, they pace out their work. They do not start a project and finish it the next day. They take things slow so that they can fully understand what they are looking at and how to fix or finish it.

Capricorns are ruled by Saturn and are under the Earth element; they are the start of Winter. These peoples are stable and their goals are more practical than most of the other Cardinal signs’. If they do have a goal that is not the most practical, then they are usually done with it by the end of the weeks because they either dropped when they saw they were not able to do it or because they made it possible and they did it.

Capricorns have a natural knack for being an authority and it shows in how they reach their achievements be it in a group or by themselves. They are determined to get themselves into those authority positions even if they know it might take them a good while. Their determination can even be seen as a sort of stubbornness. Their people are organized, nit-picky with details, efficient, but can be unforgiving at times.

People with Cardinal signs are creative leaders that like helping others reach their goals as much as they like reaching their own. They are good at finding new ways to overcome different problems and can even help others to come up with new ideas too. They like new grounds that can give them a bit of a challenge.