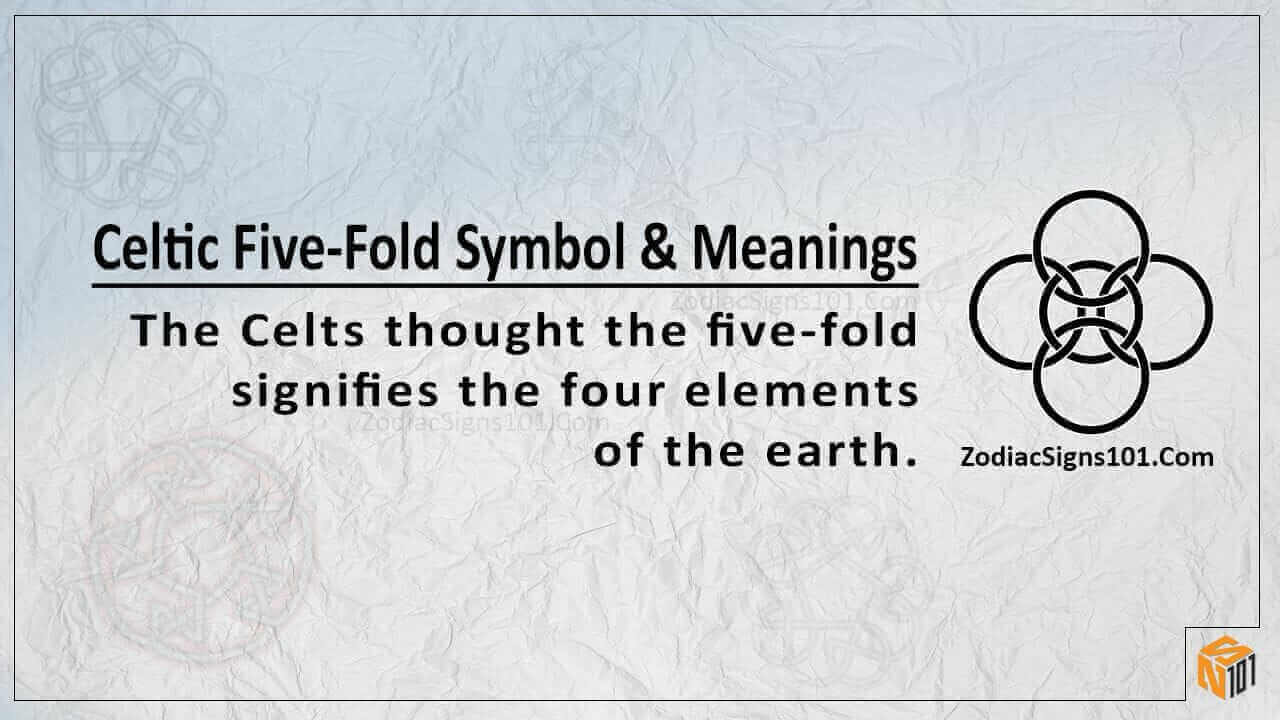 Celtic Five-Fold Symbol and Meanings: What Does this Mean to You as a Person?

There is a lot of fascination that surrounds the Celtic Five-Fold symbolism primarily due to the aesthetic value that it has. Plus, this is because the Celtic fivefold motif is one of the many Celtic spiritual symbols. The emblem represents around four circles that are conjoining in a way to signify the cross. In the middle of the of it, there is an interloping that relates dependently on the other four circles.

One can say that the Celtic Five-Fold symbolism has the meaning of inter-connections and integrations. Also, this sign speaks of the need for balance in your life and nature. Alternatively, the Celts thought of the meaning of the five-fold to signify the four elements of the earth. Plus, the way they integrate represents how one part of the four elements is dependent on the rest of the three.

The four elements in question are the earth, the wind, the water, and fire. Also, they represent the inner working of the universe with the need to correlate.

On the other hand, the fivefold symbolism bears the meaning of four directions. These are North, East, West, and South. Or, it can also represent the four seasons like Autumn, Spring, Winter, and Summer.

Did you know that the ‘fifth element’ at the center of the five-fold is also either? In the Celtic culture, there is a strong belief in the spiritual influence of the gods. Plus, in their time, they had a progressive religious affiliation to the spirit world than most of the other cultures. Relying on this information, they challenged themselves further than most to comprehend that perfect world. So, they took their time and checked on the hidden boundaries of life.

In their quest, they had an essential place for number four in their mind, but they knew that number five was just as valuable. When you look at the center of the fivefold symbol, there is unity the sign of the ultimate unity at the center. Therefore, it represents the balance that the universe needs to operate. Also, it symbolizes the unity of the energies of the cosmos and how they interdepend on one another. You can take the lesson from this meaning to enact such beautiful harmony in your life.

Moreover, it will help you attain higher heights in life if you channel all your energies to one place. In the Celtic culture, they had the druids that would channel this Celtic Symbol. They would use to help them have a deeper understanding of the workings of the universe. Plus, they had the belief that this symbol especially the ether could help them attain spiritual enlightenment.

What Does the Celtic Five-Fold Symbolism Mean?

When you are looking at the meaning of the Celtic fivefold symbol, you may need to loosen up a bit. This is because it has a lot of purposes and directions that it can take for you to comprehend it fully. All of the circles that appear on this emblem have a unique number that usually represents it. For example, the Celts that had the dive for agriculture used the one to mark the uppermost circle.

From there, the numbers move towards the East while increasing till the last circle. This also helps to mark the four directions of the compass like North, East, South, and West in the same order. The middle of the circle, the ether is the pivotal point of all the other symbols. You can, therefore, look at it as the transitional point of the directions and the seasons. The goddess Danu of the Celtic culture too has a significant representation in the circles.

Danu was the mother goddess to the children that the Celts believed to have magic. Therefore, she would will into them the power of courage, charm, and nobility. Also, there is the element of the five spiritual beings. These are Lugh, Nauda, Dagda, and Fal. The goddess Danu is their link or their epicenter. The Celts had the belief the all the five beings would give them gifts like spears, stones, cords, sword, and cauldron. There is a strong belief that the number five of the Celtic fivefold emblem represent the Holy Grail.

The Spiritual Integration of the Celtic Five Fold Symbol

Borrowing from the ancient teachings of the Buddhist, there is a special connection of the Celtic five-fold symbol to the enlightenment. The Buddhist took it upon themselves to integrate the mandalas into their meditations. Therefore, with the representation of these mandalas, they would come up with the five circumstances of enlightenment. These are the bliss, the body, the wisdom, the mind, and speech.

However, the Christians took a new path with it and used it to represent the Five Sacred Wounds. The Christians took up this symbol back in the middles ages. They had the aim of honoring the crucifixion of Jesus Christ and the hell He went through. So, the five-fold represents the five mortals wound the son of man went through.

The five-fold symbol also appears in the Islamic texts. It appears on the Hand of Fatima. The hand of Fatima signifies the need for domination, divine power, and protection. Fatima was the daughter of prophet Muhammad. Therefore, they believe that if you wear the hand of Fatima, then you have good luck on your side. The fingers of the hand of Fatima represents Prayer, faith, Pilgrimage, Charity, and Fasting.

There is a lot that one can learn from the symbolism of the Celtic Five-Fold Symbol and Meanings. So, you need to be patient and attentive to the various meanings that it shall present before you. If you feel lost in the process, you can use the symbol to meditate and channel the true meaning of the logo. The symbol of the representation of how the universe can work in harmony by channeling the energies of different elements to its advantage. Therefore, it is showing you that you can do the same and harness the powers of the people or things around you. However, when you are doing so, you have to maintain the integrity of your environment. You should do this to avoid taking too much form one part of your life.