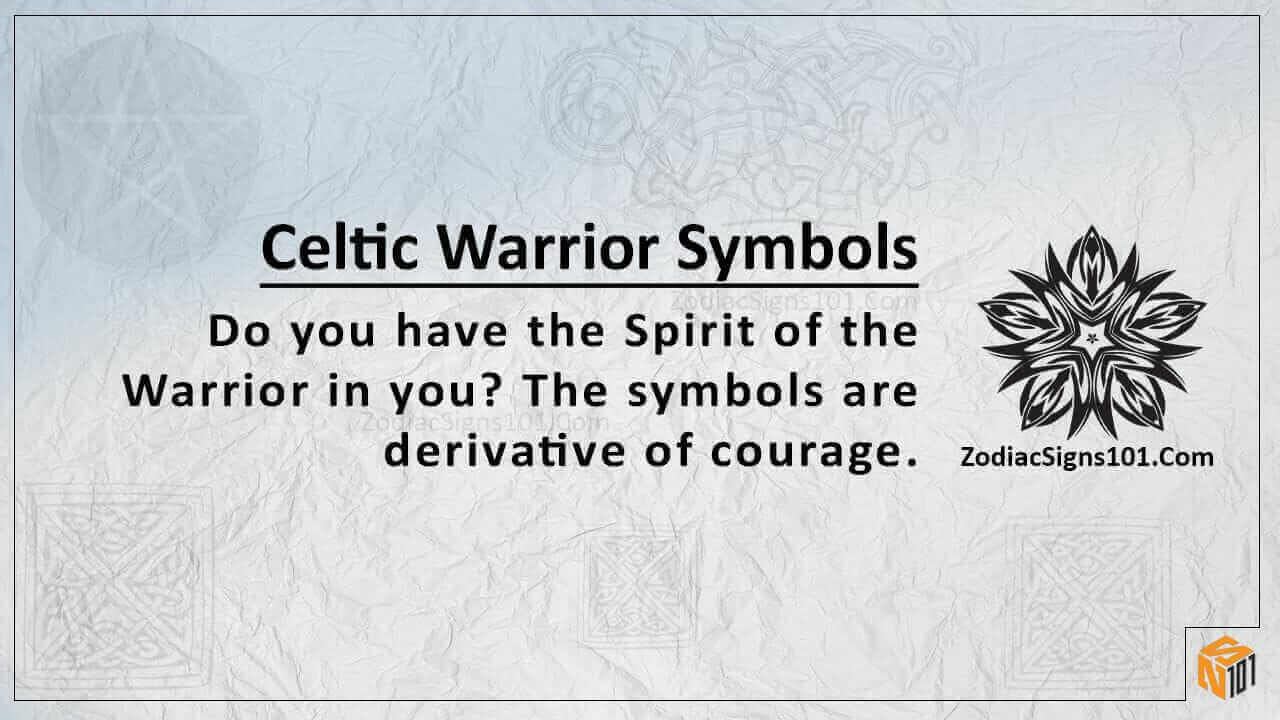 Celtic Warrior Symbols: Do you have the Spirit of Warrior in you?

I bet your mind is racing to get to know and learn the various Celtic Warrior Symbols form the old day and what they meant to the ancient people of Ireland. I have to say that for one to identify the Celt’s symbols is not easy as they did not believe in writing or keeping accurate records of their history. However, through intensive research over the region and many years of hard work, there are a few that have come to light.

Therefore, in most cases, you may have to follow your inner guidance to get to the meaning of such Celtic Warrior Symbols. In the matter of the symbols of the Celtic warriors, the Celts must have worn the emblems with a lot of pride. This is because the Celts were a hoard of warriors and the believed in attacking each other. In most of the cases, the symbols would be derivative of courage. Also, they would tattoo their logos on their bodies to show how fierce they were.

The Celtic Knot as a Warrior’s Totem

The Celtic Knot is one of the few emblems that would connect the ways of the warrior to his duty to his clan. They would adorn such symbols to war to remind them of their commitment to their people and why they were fighting in the first place. Some of the Celts would use the emblems of things such as animals and trees. This act would make them appear to be more intimidating. They would wear the theme of the Celtic in different colors to separate each warrior form the rest. Also, they would use the symbol of the Tuatha de Danann.

Symbolic Meaning of the Warrior Symbols

There is a lot of keen artistry that comes into the making of the warrior’s symbols. Moreover, the Celts had a warring culture that would contribute hugely in the way the people would identify one. So, most of the war symbols that they had would have nothing less of pride, courage, and duty to one’s clan. So, they would wear them symbols in the form of tattoos and even create them on their shields and swords. Remember that the sword is the essential part of a Celtic warrior.

They would even name some of their swords as per their wishes of looking more intimidating. Plus, the Celts were all warriors, women, males and children alike. They did not have the time to select those who would be safe. Running away from a fight was a taboo, and they would look down upon such people as cowards. Some people say that the Celts had tattoos done on their bodies along with their sexual sensitive and appealing parts. The parts that they would place the tattoos are called the meridians. They had the belief the symbols in these regions of the bodies would help the warrior fight better in war.

Symbols of the Celtic Warrior

Several emblems denote the way of the warrior in the Celtic culture; here are some of them and their Symbolic meaning.

The Celtic Symbol of the Sword

The sword is probably the essential weapon for any warrior from the ancient days. Moreover, most of the people in the Celtic culture would identify themselves with the type of weapon they chose for battle. More so, some of them would also make the sword bigger and shaper. So, that when they would go out to fight, they would look more intimidating. Some of the people would have more large swords in the battle to equate their status in their clan.

The Celtic Symbol of Ken Rune

This is the Celtic warrior symbol of flames. Therefore, they would adorn such emblems on their weapons and even bodies. However, some of the Celtic warriors would be the symbol as a totem around their necks. In this manner, it would bring good fortunes in the wars to come. Some think that the Ken Rune symbol is more like that of an arrowhead. It speaks of the power and the strength of the male warriors in the Celtic culture. So, it combines all of the potent forces in the warrior. Some of these are sex, action, and heroism.

The Celtic Symbol of the Ogham

Most of the ancient Celtic warriors had an appeal to using the Celtic Ogham as a symbol of protection in the wars that they fought. Alternatively, they had the belief that the Ogham would give them strength in battle. Also, the lines of the symbol that was in the Ogham would provide wisdom to all the warriors of the Celts in the most difficult of times. Plus, they would wear the emblem knowing that it was the symbol representing the cycle of life and the interconnection to the other realms of the universe.

So, they would go to war fight as hard as they could be knowing that that was not the end of their life. They would get a new chance to come back from the world of the spirits. Plus, they would also get to spend time with their loved ones that had fallen before them. The oak tree that was at the center of the Ogham symbol would associates with the symbolism of strength and stability. These are two bright things that any warrior would need in the time of the battle. Plus, the oak would give the power to conquer and defeat all of their enemies.

The way of the Celtic warrior was one that would determine how the people of your clan would look at you. They would outcast the weaklings and laugh at their expense.

On the other hand, they had the symbols to mark the pride that they had in their clans. Plus, the courage that they would show when it came to protecting the people of their tribe and their way of life. In most of the instances, the warriors would tattoo some of the symbols. This was used to signify strength and power. Also, they would do that to borrow from the energies of the symbols that they were adorning.