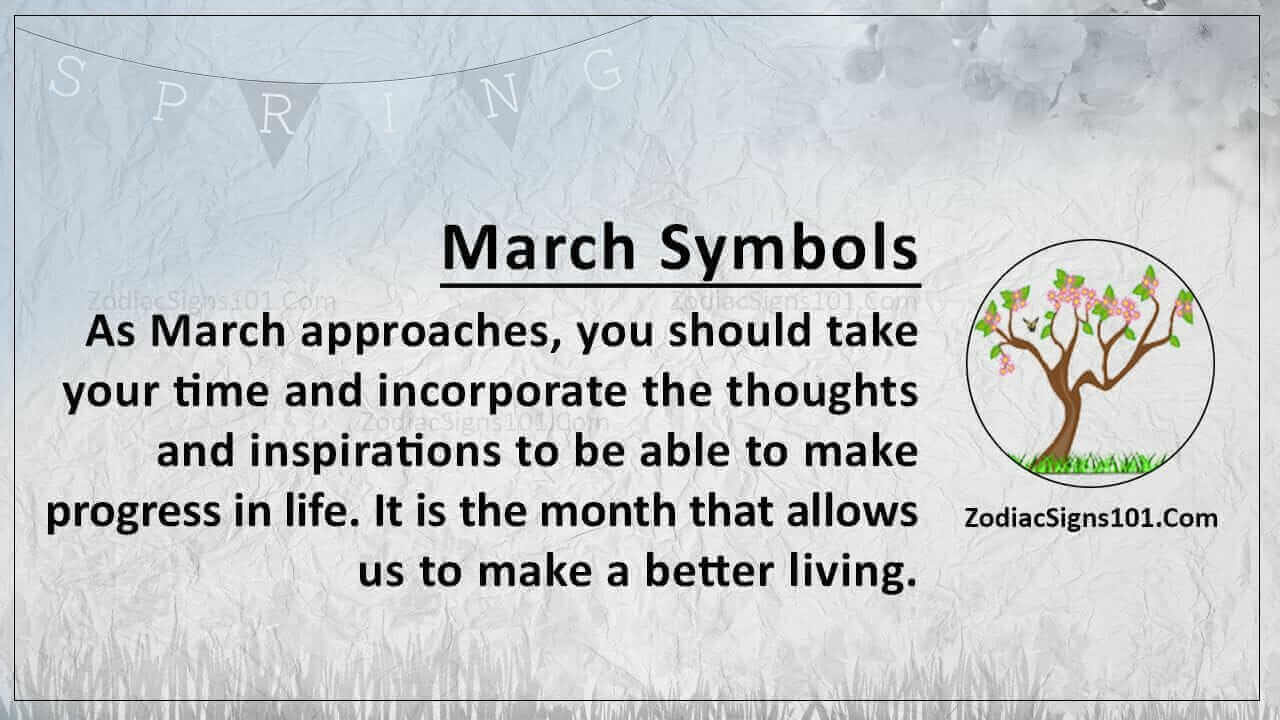 March Symbols: The Simple Explanations of the Origin of March

Did you know that the meaning of March symbols revolves around the Roman god of War by the name Mars? Moreover, he helped the Romans win many wars. Therefore, following in the footsteps of Mars, the Roman soldiers had the mandate to love and die on behalf of their republic and emperor. In brute force, they would pledge and show their level of heroism in the battlefields. Also, they would enact their patriotism towards their emperors. This is one of the reasons they Romans used such traits to describe the god of Mars. At the period in time, the month of Mars was the first month in the Roman calendar by the name Martius.

Mars was one of the gods that were highly revered by the Romans. Therefore, that is why they placed him first in the calendar. Around this time of the year, the Romans would take time out if their busy schedules to honor him. Also, remember that March is the period that gives way to the transition into spring. They would do so to mark the symbolism of new life and season as per the ancient texts. Mars was not the god of war. He used to be the one responsible for fertility and the work of agriculture. Therefore, he was the one responsible for the sustainability of the ancient Romans.

As per the history of the Romans, the god of wars was ones the god protector of agriculture and fertility. Therefore, in his prior commitments, he was the that would control the way the people would produce and harvest. Also, he had the power overgrowth of all things, including the animals. This way he still the most important god hence the first month of the year is what is right for him. The symbolism of March allows us to have a passion for warming our heart and minds after winter. In a way, the month of March has the power to keep a smile on our faces after facing the harsh condition of winter. Also, you can choose to look at March as the transitioning period.

March Symbolism: The Symbols of March

The Tree Symbols that are Associated with March

The Symbol of the Ash Tree

The Symbol of the Alder Tree

Like the ash tree, the alder is one of the trees that represent the symbolism of the March. In most of the culture, the alder is a protected tree. It can thrive one some of the wettest environments. It has the meaning of change written all over it.

On the other hand, it represents the meaning of Movement and emotions of a person. So, like the alder tree, one must learn to remain flexible. Therefore, they will allow for opportunities to find us just by keeping an open mind. The alder tree also has the power to adapt and grow in one of the harshest environments.

March Symbols: The Flowers of March

The Symbol of Daffodil

Like most months of the year, the month of March too has flowers; the help represents its general meaning. It is in this period of transition that the daffodil flower usually takes shape and blooms.  However, I believe the symbolic ties of the daffodil flower goes a bit further than that of timing.  The daffodil brings with it the meaning of forgiveness, trust, honesty, and love. Therefore, it teaches you that in March, you should learn to outgrow the negative sides of you. Also, you should open your heart to new changes in life.

The Animal Symbol of March

Just like the name suggests, the spring rabbit comes out during March to play and rejuvenate. Also, they help mark the month with the meaning of fertility. Also, you deduce the sense of new beginnings when you see the rabbit around. It shows the people born in March that they have the opportunity to have new beginnings, changes, and growth in life.

The Symbol of the Shamrock Flower

The Shamrocks are part of the flowers that bloom in March. Also, they represent the meaning of St. Patrick’s day. However, this is the time most of the people in Ireland celebrate. Like the March and the St. Patrick, the Shamrocks have the traits of enduring some of the worst conditions possible. This means that you should mould your survival instincts on this type of lifestyle. Some people even compare the Shamrocks the durable will power of the god of Mars.

The Zodiac Symbols of March

Two significant astrological signs touch on the meaning of March. These signs are the Aries and Pisces. The two signs serve to represent the people that were born in March and the characters. Also, it helps predicts their future based on the readings of the stars. The Pisces are kind people but also quite creative. They have insightful thoughts and can also be spiritual. Their sign is that of the fish.

On the other hand, the Aries has the Fire sign. The sign is under the influence of Mars, the god of war. They are also bold, and they are more outgoing. However, they have such tedious behavior like hot temper. Despite their distinctive characters, they are fun to be around and love being helpful.

As March approaches, you should take your time and incorporate the thoughts and inspirations to be able to make progress in life. It is the month that allows us to make a better living. However, the best way of doing this is by following the teachings that it has for us. Also, you will need to be patient with the instructions of the meaning of March to be able to harness all of its powers.