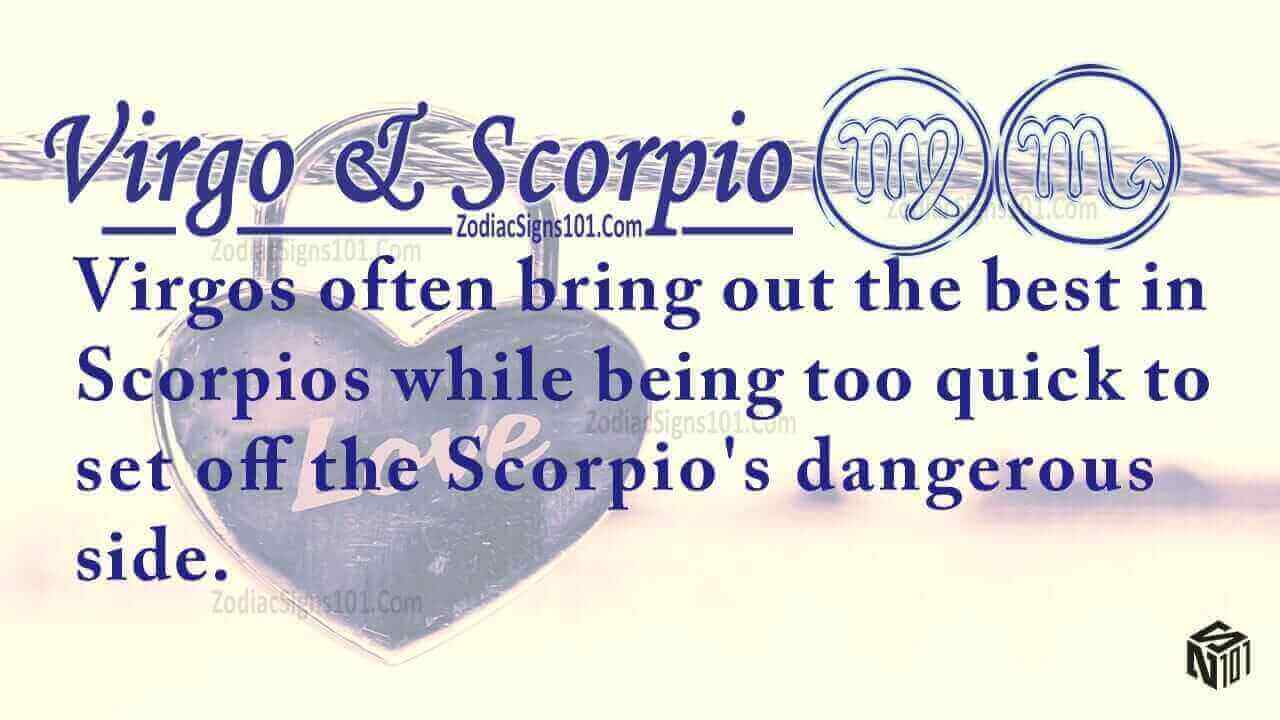 How will a Virgo Scorpio relationship develop and grow? Will they live happily ever after, or will they be better off apart?

The perfectionist Virgo (August 22 – September 23) has high expectations for themselves.  They expect to work hard so that they can provide for their future security and financial stability.  Their work ethic is admirable, and they’re logical and analytical. They’ll use these traits in the workplace and their home life.  It takes organization and routine to keep them in a comfortable place.  Change and unexpected issues can stress them out.  They earn high praise for their work, but they can still get anxious if they don’t feel that it’s good enough.  They’ll always keep themselves busy and are willing to learn and try new things, but they will stop themselves if it seems too risky.  Even spontaneous ideas need a little mental analysis.

The hard-working Scorpio (October 23 – November 22) understands the importance of a strong work ethic.  They’re often at the top of their field because of their determination to reach their goals on their own.  The energy they put into their work comes from the mindset that they don’t want to rely on anyone else to get the job done.  This means that they put a lot of focus on the details that can make or break their project.  The friends they have are based on loyalty and respect because they don’t have the time for casual acquaintances.  They support the people that are closest to them but often exhaust all of their options before they would consider asking them for help.  In any relationship, they’ll want to be in charge and may not appreciate someone telling them what to do or doubting their ability to do so.

The similarities that these two signs share will attract their respect and appreciation.  However, their differences require a lot of compromise and effort for that respect to develop into a long-term relationship.

When two people are shy, it may come as a surprise when they connect in a romantic relationship.  Virgo and Scorpio don’t do much socially because they’re often hard at work or enjoying their downtime at home.  They’re more likely to meet at places such as schools or work or a small family gathering.  Scorpio will probably make the first move as they often take charge in most situations.  What starts as a conversation can lead to friendship before romance is even in consideration.  They’ll be most comfortable in small settings rather than nightclubs or large events.  Virgo is ruled by the planet Mercury, and Scorpio is well-versed on a variety of subjects and interests, so they’ll be able to talk at length. They’ll even be able to learn from each other as they share their ideas.

Not only do they share an interest in quiet venues, but they also share strong work ethics for reliable end products.  Virgo can sometimes get bogged down by the stress that they put on themselves as they try to make everything perfect.  Scorpio knows about this pressure and can help their partner deal with the anxiety before it does any harm.  At the same time, Scorpio’s very creative and has many ideas that can affect their productivity.  Their partner knows how to stay focused and organized so that they can help them be more practical.  Though they work hard toward their personal goals, they want to help bring out the best qualities in each other so that they can be at the top of their game.

Both of them may be financially stable in their careers, but they’re also very frugal with their income.  This means they don’t work for material wants. Instead, they strive for long-term security as they establish the lifestyle they want.  Also, they may not take a chance on the lottery, but they may invest in stocks that they’ve thoroughly researched.

Despite their common interests and characteristics, there are parts of their relationship that require more effort to ensure a happy relationship.  For one thing, Virgo’s more practical than emotional, so they’re not as aware of other people’s emotions.  Scorpio can have a lousy temper whether they’re frustrated with themselves or frustrated with people who aren’t putting enough effort into their work.  At the beginning of the relationship, Virgo may not know why this is happening or how to handle it. This can end up setting off their lover even more.  In time they’ll find how to bring calm into their partner’s life so that they can talk rather than argue.

Emotions can also wreak havoc on Virgo.  Their stress and anxiety can lead to breakdowns because they push themselves too hard.  Even though they may seem to have it together, they’re bottling emotions that they don’t know how to handle.  When one or the other is dealing with their feelings, they aren’t likely to open up about their feelings.  This is especially true at the beginning of the relationship or when they are at the worst of their breakdown.  Even though they may get support from their partner, they aren’t experts.  For a better way to deal with the emotions that can put a strain on their relationship, they should consider professional counselling.

Communication and compromise are often solutions for many relationship problems.  However, control issues may get in the way of progress.  Scorpio’s personality is one that wants to take charge in many aspects of their life, including their romantic relationship.  This can make them possessive and demanding.  Virgo prefers working in the background and being in charge of their roles.  They may have to come to an agreement on how they’ll take care of their home and family, but there’ll never be a doubt regarding Virgo’s fidelity and loyalty to their partner.

When it comes to compatibility, these two signs have a lot in common and have a lot to work on as a couple.  They’ll share in the security and stability of the home they build together, and they’ll respect each other.  Despite their strong communication skills, they have to work on their ability to communicate their emotions.  When they can share their feelings rather than allow them to blow up when the going gets rough, they’ll have a happy and secure relationship for each other.