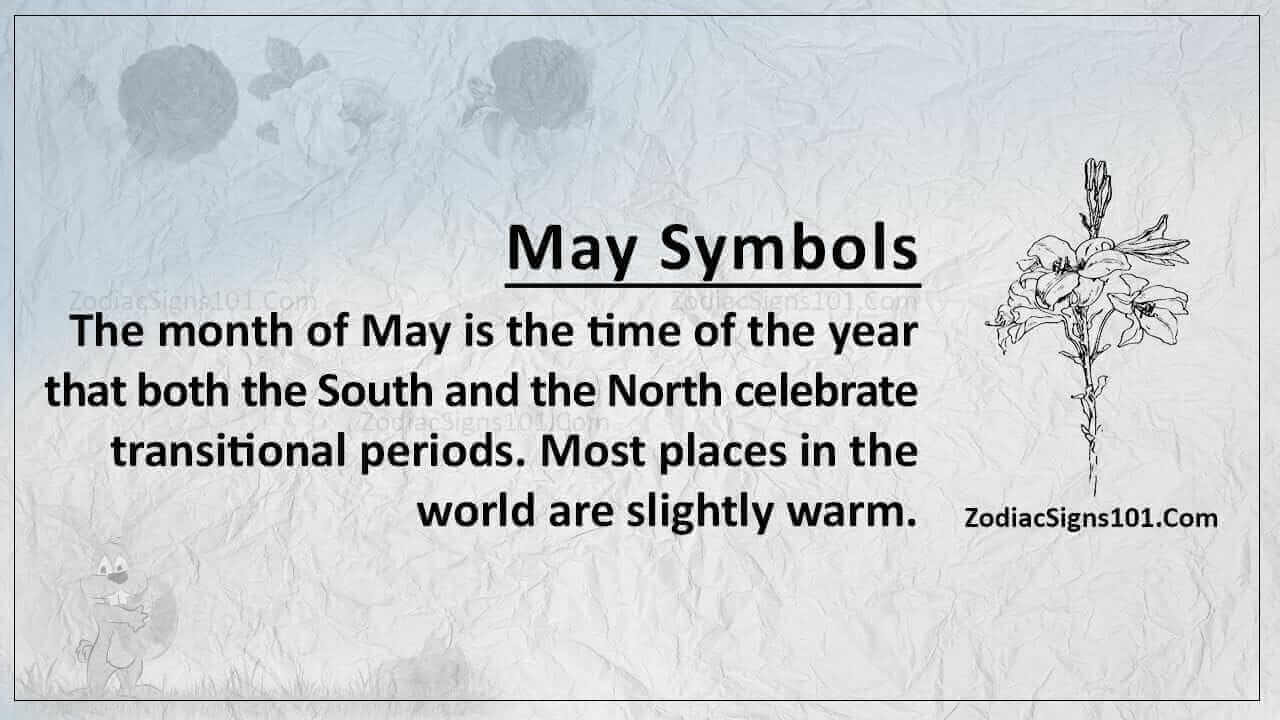 May Symbols: Learning the Simple Meaning of May

On the other hand, the Russians also had celebrations in honor of Mayovaka. Most of the cases the people would go out and have a picnic in the green meadows. However, late times of this part in Russian history got associated with revolutions.

Also, the month of May has with it the celebrations of the pagans and Wiccans. These two take their time to hold celebrations in honor of the meaning of fertility and life. Also, they incorporate the need to celebrate the meaning of creation. As per the ancient text suggest, the month of May is the time that the Maiden Goddess reaches her full maturity. Therefore, in turn, one of the kings, the Oak King, falls madly in love with her.

Later, he coats her hand and wins her over with charm and the depiction of the beauty of nature. As per the suggestions of the is myth, it means that May is the time that the celestial world conjoins with the mortal world. Therefore, most people have pleasant dreams, and there are the power and influence of joy that goes around. Also, there is a lot of wedding in this period of the year.

The Symbols that Help Define the Meaning of May

Like most of the months of the year, May also has many symbols that contribute to its ultimate meaning. Therefore, before you can conclude the meaning of May, you will look at all the other symbols. Here are some of them that will help us conclude the symbolic meaning of May.

The month of May has two birthstones. These are the emerald and the agate.

The Symbol of Emerald

According to the ancient texts, the emerald used to belong to April. Therefore, it was under the control of the Venus, who was also the goddess of love, success, and fertility.  In most of the case, the sight of an emerald gives and inspire hope in most of the people. If you wear the emerald in May, then you can harness its magic. It will give you the lead on attributes like wisdom and, devotion and luck. It also has the power to build bridges between people.

The Symbol of Agate

There is no better concept of a talisman than the use of the gate. The ancient people would use to make amulets for protection. Moreover, it can give you the inspiration of hope and strength to do all that you want in life. Some even go as far as placing the agate stone under their beddings to help protect them from night terrors. The people of Babylon used the agate stone to stave off storms. Most people also believe that the agate stone is there help people go through their dark emotions positively.

May Symbols: The Zodiac Signs of May

The month of May has two symbols from the Zodiac, namely there sign of Taurus and the sign of the Gemini.

The people that are at the offset of May take up the sign of Taurus until the 20th of the same month. These are the people that are born under the power of the bull, which is the sign of Taurus. Mostly, they are good people with the intuitive nature of being trustworthy. This is one of the powers that help them take the form of leadership in their social circles. Also, they present themselves as strong and independent. However, they have the norm of being forceful and awkward. Although this is one of the attributes that help them become the people that most people love.

The sign of the twins represents the people born under the Gemini. This is also an air sign. Generally, they are a social and amicable lot. They can also be quite smart. Although they are not open to others about their personal lives despite being social. If one of them is your friend, then you will need to be interesting throughout. This is because they have no room for dull moments in life. They can make good creative arts teachers and good artist also. However, they a challenging concept because they have a very short attention span on any given thing and anyone.

The Flower Symbols of May

The month of May various flowers that help it in the description of its overall meaning. Here are some of them.

The Symbol of the Lily of the Valley Flower

The language of the May flowers or the lily of the valley speaks of the power of love, joy, and happiness that people can have in life. Also, it captures the meaning of purity and good fortunes in our lives. These flowers help the people that are born in May have an extraordinary marriage. This is because many people use the lily of the valley as the centerpiece flowers of the weddings and celebration of May. Many people of German descent also believe that this flower brings people good luck.

In the ancient culture of the Celts, they had the belief that the symbol of Hawthorn was a symbol of this period of the year. They use it mostly in the celebrations of the Beltane festival. It also represents the attributes of love, safety, balance. It also gives the people that believe in its influence the power of duty and guidance of the fairies. The fairies must ensure that the people have the take care of their heavenly assigned mandate in life.

While looking at the matter May symbolism, there are a lot of things that you need to consider. Also. The month of May is the time of the year that both the South and the North celebrate transitional periods. Most places in the world are slightly warm, and people like staying outdoors. Also, there are a lot of festive celebrations and some holidays that many of us may want to have in May. I think it is time that most people around the world like to go on vacations.