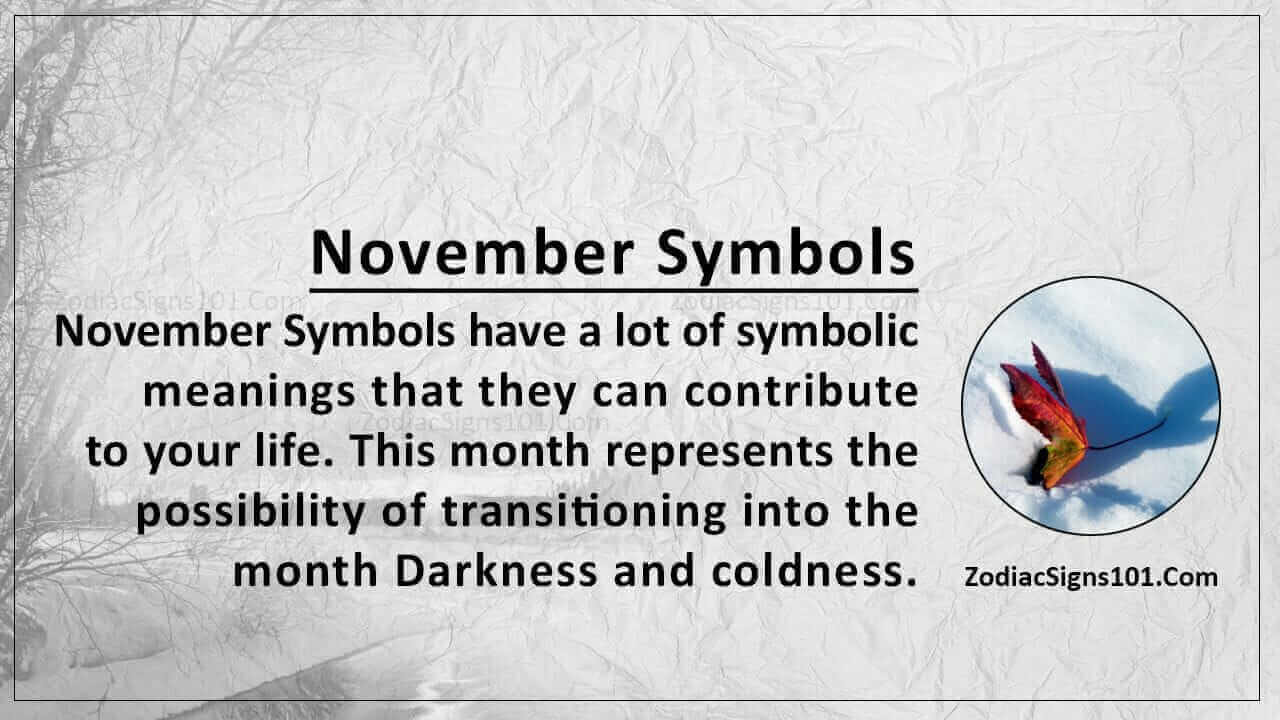 November Symbols: Learning the Functions of Its Symbols and How to Apply Them in Your Life

The various November symbols are there to help you define the meaning of the month itself and the different symbolic attributes that it may have. The significance of November stands for the transition of the Seasons from autumn to winter. However, these are some of the Seasons that you can only witness the in northern and the southern poles.

In November, many people across the United States usually celebrate Thanksgiving. The people in the United States will be celebrating Thanksgiving to give thanks to a good season of Harvest as they approach winter. During this festive season, many families come together as a community to give thanks to what the grateful for. November is also symbolic in the sense that it was the month when the Berlin Wall came down in the year 1989. 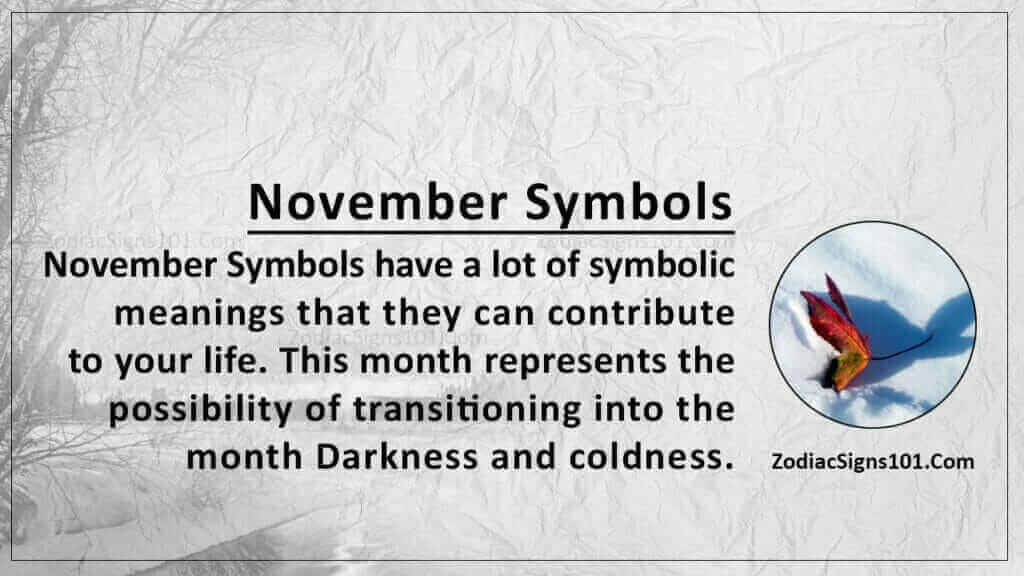 November Symbols: Representation of the Month in Numerology

We have seen above that number 9 has a close and powerful relationship to the meaning of November. This is because as per the ancient calendars of the Romans, November used to be the 9th month. As per numerology, number nine has an association with attributes like wisdom and knowledge. So, the people that belong to this month will grow up enjoying an upper hand of useful experience and understanding.

Also, there is a lot of power that comes with associating with number 9. They are from the ancient Roman. The numerologists also associate the number 9 with spiritual meaning. Also, this same number that represents November takes after the meaning of life after death. As per the views of the Alchemists, number 9 represents the path of spiritual enlightenment. Some of them think that if you believe in the purpose of November and 9, you’ll gain higher consciousness.

People under the influence of November are bound to make crucial and influential decisions that can change the world. On the other hand, in the current calendars, November takes after number 11. The number that it takes after represents it as the month of New Beginnings. In recognition of the meaning and the new value that November took after a few changes, you get the attribute of Change. Remember this month represents the possibility of transitioning into the month Darkness and coldness.

Some logos belong to November that most people used to translate the purpose of the month. Therefore, if you want to understand the hidden meaning of November, you will need to look into most of these symbols. Here are a few examples of the symbols that represent the meaning of November.

Like many months of the year, November has specific birthstones that it claims as its own. One of them includes the topaz. Topaz is one of the most beautiful gems out there. Moreover, it is there to serve as a reminder that there is Hope of the sun coming back later in the next year. The symbol of the topaz serves as a reminder that we need long lasting friendships and relationships.

The ancient people also thought of the topaz as an Amulet that symbolizes the meaning of success, Wisdom, and luxury. Also, it expresses the essence of good luck and good health. The Topaz also has the attributes of inspiration, peace, pleasant personality, and honesty. People have been known to use the property of the topaz for prayer. The Topaz also comes in different colors like pink, purple, and white.

The Symbol of the Citrine

Citrine is also known as one of the symbols that represent the meaning of November. Although most of the people refer to it as a merchant stone. This is because most of the merchants in the ancient days preferred the company of citrine as an Amulet. Moreover, they had the belief that citrine could attract wealth. On the other hand, some of them even believed that Citrine as an Amulet could help them retain their wealth.

The Zodiac Symbols and the Meaning to November

Like the rest of the months of the year, November also has two zodiac symbols that appear within the month. These are the Sagittarius and Scorpio. These two signs act as the birth signs of the people that were born in November.

The sign of Scorpio is in alignment to take up most parts of the November from the first to the 21st. Also, the people that are born during this period are particularly brave. They also have a strong will and have the norm of self-guidance. This also means that they are self-motivated people. Therefore, if they set their mind to a task, they will do anything to attain the goal.

In most cases, members of Scorpio always try to be an inspirational figure to the members of their family and friends. There is a common belief that the people belonging to the sign of Scorpio are quite flighty. So, in most of the cases, they will only deal with people who are interested in them.

This is the sing of the people that Graces the month of November with their birth from the 22nd to the end of the month. In most of the cases, you’ll find that they are intellectuals. There is a common belief that they can make good philosophers because they are optimists in nature. Some people also argue that there this way because the weather is unbearable. On the other hand, they love to experiment to help improve on the ideas.

November Symbols have a lot of symbolic meanings that they can contribute to your life. Therefore, you should learn how to give them a chance. They will undoubtedly help you attain excellent sustainable growth here on earth.