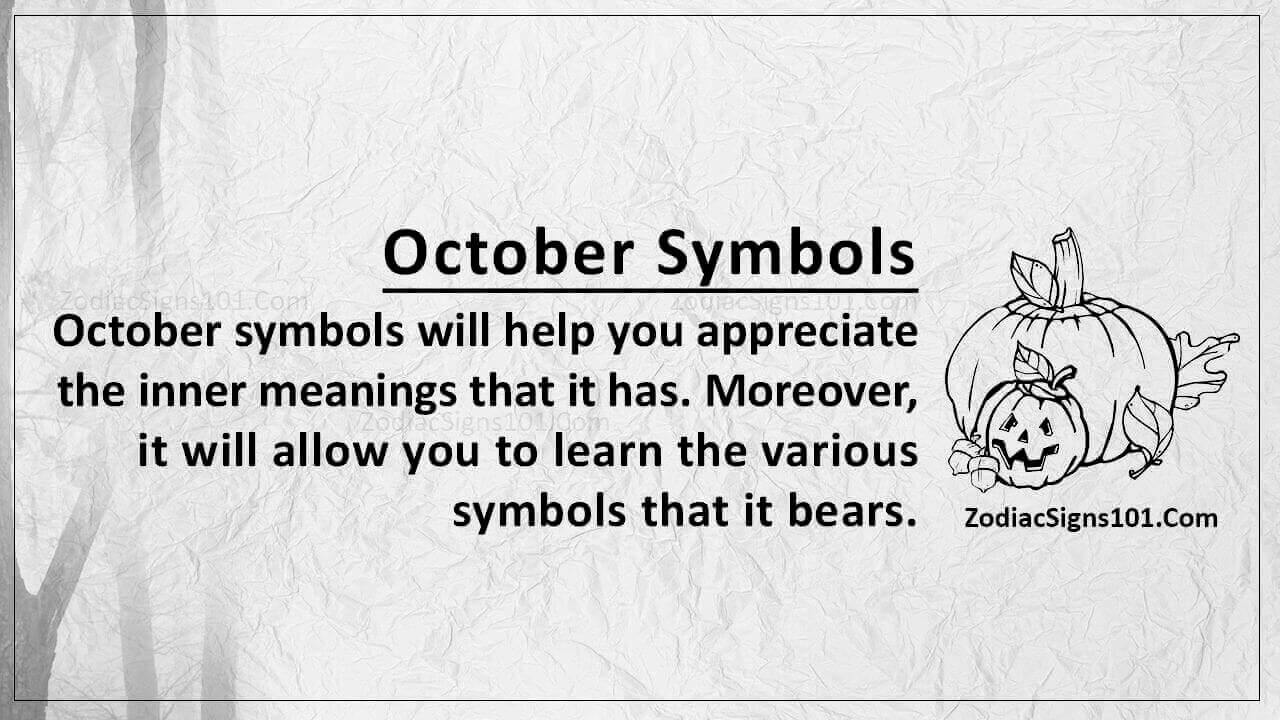 October Symbols: How does this Time of the Year influence Your Life?

The various October symbols that we use to represent, it defines the period in time that comes before the transitioning of autumn into winter. Along the Northern Hemisphere, the people find themselves right in the middle of autumn. However, along the coastal Lines of the Southern Hemisphere, it is springtime. The month of October, like most of the months of the year, takes its name from the Romans.

As per the initial arrangement before the initiation of the Gregorian and Julian calendars, it is the eighth month. This means that during this period, there were only ten months in a year. So, the Romans gave the month of October its name based on the Latin term Octo. Moreover, they arrived on the name from the Latin term Octo to mean eight. Plus, most of these symbols that belong to October came about after the introduction of both January and February.

October Symbols: Understanding the Meaning of October in Numerology

The Symbol of Number Eight

As one is tackling the purpose of October, they’re probably going to run into the significance that it has through its numbers. The original numbers that October had were number 8. This number as per the views of numerology represents specific abilities and characteristics that are good. Therefore, some of these include the symbol of prosperity, fertility, peace, and even wealth. This symbols of positivity resemble the happiness that most of the Farmers around the world are having.

This is because, in most parts of the world, the Farmers are reaping their harvest. This time of the year also represents the abundant wealth that most of the Farmers are about to experience from their crops. Generally, the number 8 blesses the month of October. Through this number, most of the people change to make crucial and influential decisions. This is because most of the people during this time are having a lot of joy due to the level of their prosperity.

The Other Meanings of Number Eight

On the other hand, the Chinese people also use the symbol of number eight to mean prosperity. Alternatively, different views associate the number 8 to the powers and influence of planet Uranus. In this context, figure 8 always shows the meaning of strength, tenacity, and aggression. All of these are attributes that help people achieve success. People that believe in figure 8 also tend to do quite well in financial and business matters.

The number 8 in this context also represents the symbol of infinity. Plus, in a specific way, it shows that there is continuity into the meaning of life. When you look at this in a perspective direction, you will realize that the number 8 symbolizes all good ideas that one need in business. It also it is there to serve the reminder that in every situation nothing lasts forever. Therefore, as an excellent business person, you should know life or your business will not always stagnate.

The Meaning of Number 10

The number 10 captures a representation of October in the Julian, and the Gregorian calendars also have a significant meaning. The name is double-digit. Therefore, its purpose is multiplied. It also has the number zero that shows a sense of continuity. Anyway, it represents the seasons of the year. Somehow it shows us that after going all through the Seasons, we shall be able to attain our harvest. This is the best way that we can prepare for the transitional period into winter and winter itself.

On the other hand, it symbolizes the need for unity and spirituality. Together these two can give one the chance to have a fresh start in life by attaining personal fulfillment. However, the best way that you can go through these attributes and goals is to Work Hard.

October Symbols: The Representation of October by the Zodiac Signs

October also in its own right, has two of the zodiac signs these are the Libra and Scorpio. in this month the Libra sign gets representation by the first 21 days of the month. Then the members of Scorpio check the rest of the month.

The members of Scorpio our born towards the end of the month. This is one of the characteristics that make them highly motivated people. Also, they like giving other people motivation do better. But this only covers the people that they’re close to like family and friends.

On the other hand, they are also outgoing and like to make new friends like Libras. Moreover, they are not entirely grounded. Therefore, from time to time, you will need to remind them to stick around or stay.

The month of October, like all the rest birthstones that represent its meaning. In this case, we have two stones, which are the Opal and the tourmaline.

The stone, like some of the birthstones, is a sacred stone; also, it has different colors. All of this helps it brings out its special meaning. Some of these include a sense of hope and treasure. Moreover, tourmaline is a stone that is everywhere on the planet. This makes it familiar and readily available to most people. Some people in India use it for rituals while The Alchemist would use the tourmaline stone to help on the matters of regulating temperature. As per the ancient text, there is a belief that the tourmaline stone as a close Association to The Philosopher’s Stone.

On the other hand, we have the Opal that glitters in light inspire the meaning of hope and inspiration. in short; it is the stone that radiates an aura of positive thinking. Somehow by obtaining it will encourage you to look deep down into yourself. Also, it will help you to get in touch with your inner feelings.

October symbols will help you appreciate the inner meanings that it has. Moreover, it will allow you to learn the various symbols that it bears. It will provide you with the opportunity to get in touch with some of the attributes that belong to the people born in October. Alternatively, you will also get the chance to compare the symbols of October with those of other months.