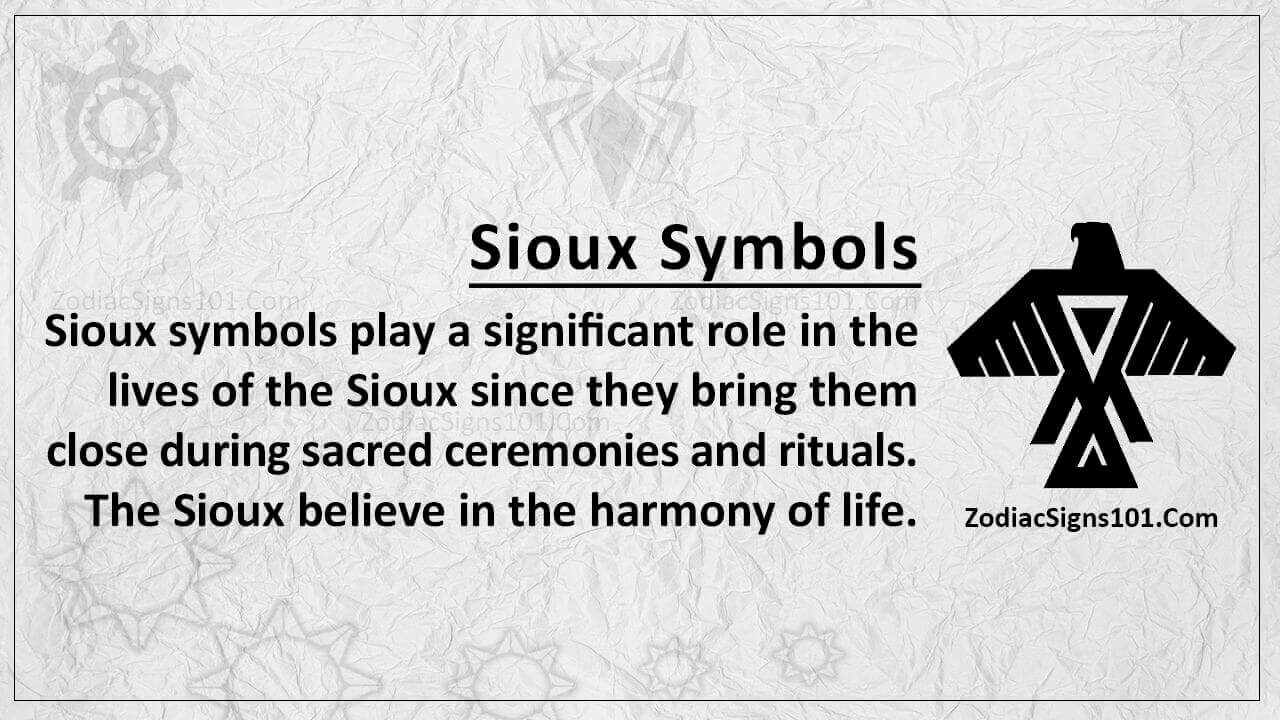 Sioux Symbols: Who are Sioux?

In ancient times there was a time when the earth was sacred, and ancient people had a connection with nature. Nature was a symbol of peace, harmony, love, and togetherness. In the past, people lived simply without any form of complications. But we live in a world today where there are problems in every corner and turn that we make. The Sioux are native Indians that speak three different languages, that is, Lakota, Dakota, and Nakota. The word Sioux is derived from the word ‘Nadowessioiux’ which stands for enemy or snake. Nadowessioiux is a Chippeway word. The Sioux use Sioux symbols in their culture to have a deeper understanding of their spirituality and symbolism and the connection humans have with nature.

The Sioux symbols are put to use during sacred ceremonies or rituals. The same symbols remind the Sioux of the culture and ancestral roots. The Sioux refers to a collection of people and not a specific tribe. The Sioux worship a grandfather spirit they refer to as Wakan Tanka. Some of the practices they indulge in include the use of pipes during prayers and having vision quests. Sioux symbols play a significant role in the lives of the Sioux since they bring them close during sacred ceremonies and rituals. The Sioux believe in the harmony of life.

The Sioux people comprise of the Lakota, Dakota, and Nakota. The Lakota is the largest of the three tribes. The other name of this tribe is Teton Sioux. The Lakota occupy lands in North and South Dakota. The Dakota, also known as Santee Sioux, occupy land in Nebraska and Minnesota. The Nakota, which is the smallest of the three tribes, occupy land in North Dakota, Montana and South Dakota. From the past, the Sioux have been a proud nation. Other tribes feared them due to their strength, resilience, and culture. They took over wild horses and followed the Buffalos in their trails for easy navigation.

The Sioux were warriors, but they valued family ties. The family was an integral part of their culture. Children were given all the attention hence the name ‘Wakanisha’ meaning sacred. The Sioux believed in monogamy, but there were exceptions where one would marry more than one wife. Anyone found committing adultery was subject to disfigurement. The men were in charge of protecting and providing for the family while the women were in charge of ruling domestic and family affairs.

The Sioux were and remain spiritual people. The Siox use visions, dance, and songs to commune with the spirits. They self sacrificed themselves by inflicting wounds on their bodies while performing rituals. The self-sacrificing assured them of their identity as Indian warriors. During burial ceremonies, moaners would also hurt themselves to honor the one who has died.

This tribe includes seven tribes, that is, Brule, Oohenupa, Itazipacola, Ogalala, Hunkpapa, Miniconjou, and Sihasapa. These tribes consist of buffalo hunters and warriors. Currently, a large population of the Lakota lives at the Pine Ridge Reservation in South Western, South Dakota.

This tribe was well known for their skills in hunting, fishing, and farming. They lived in camps; hence, they became accustomed to the camping lifestyle. They also collected stones which they used to make knives. The four bands in the Dakota tribe include Sisseton, Wahpekute, Wahpeton, and Mdewakantonwon.

Examples of some Sioux Symbols & Their Meanings 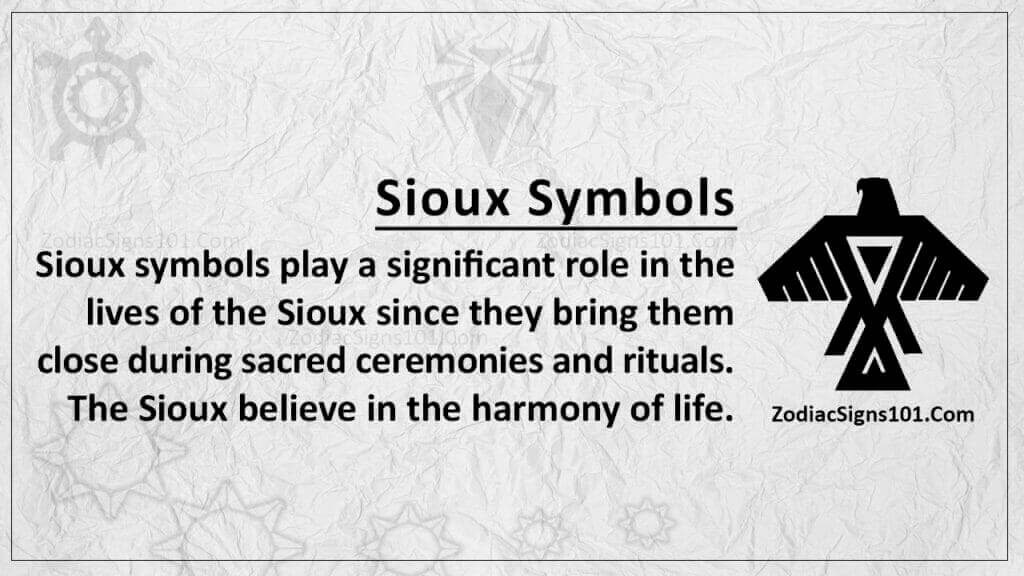 This Sioux symbol symbolizes the earth and the four winds blowing on the earth. The direction of the four winds also signifies the four spirits that convey messages to people in the four corners of the world. The center square represents the earth’s foundation. The connection of humans and the earth is a blessing in Sioux culture.

This symbol is used for learning, growth, enlightenment, and help in the areas of life that we cannot handle on our own. It depicts seven stones which represent the seven types of human personalities. These personalities include hate, envy, compassion, love, fear, connection, and grief. The twelve points in this symbol represent the twelve months in a year and the twelve full moons. The large circle at the center of the symbol represents the 13th full moon. The four points represent the four paths in a person’s life. The four paths include East (Insight), North (Wisdom), West (Introspection), and South (Innocence).

Other Sioux Symbols mean different things but the above mentioned are enough to enable one to understand Sioux Culture. Sioux symbols have a connection between humanity and nature.