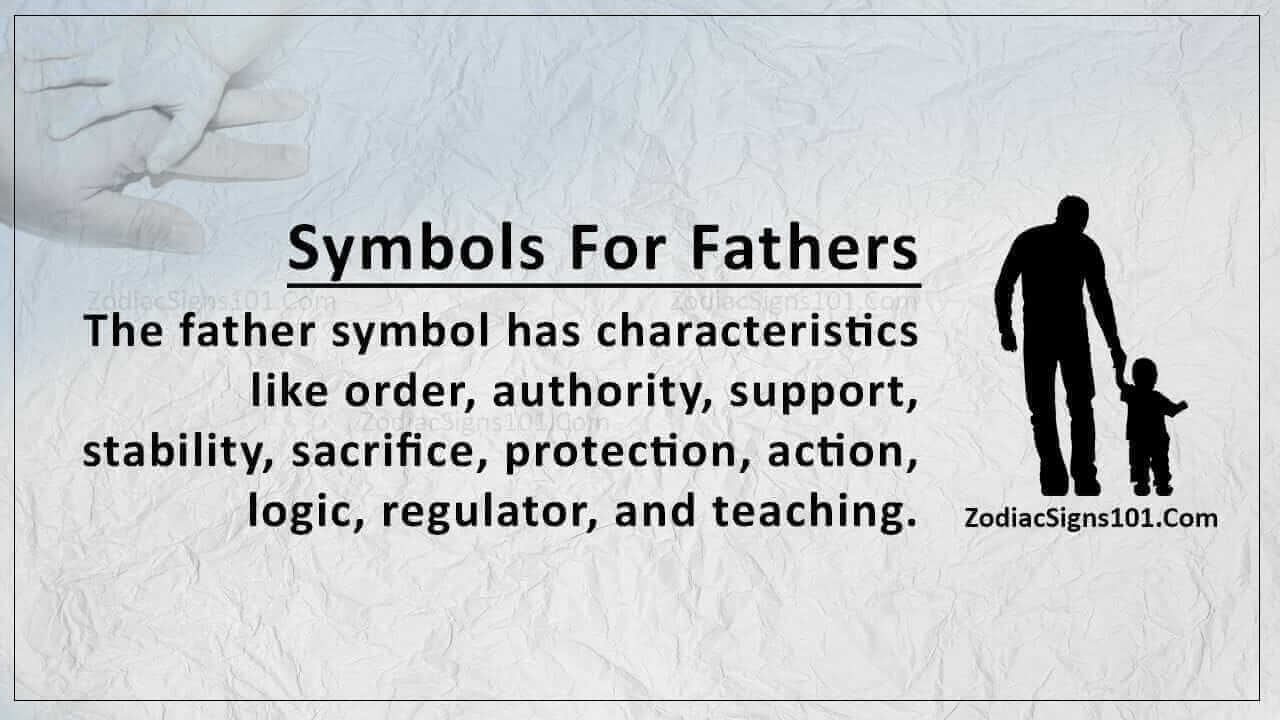 Symbols for Fathers: How Do these Symbols Influence Your Parental Skills?

Today is Father’s Day as I’m writing this article, and there are a lot of symbols for Fathers that one can use to represent them. Also, you can use the emblems to show love to the father figures around the world. You should remember that not all fathers are the same in the world. Therefore,  some of these symbols and meaning don’t apply to them. However, they also have specific symbols. But when you are tackling the definition of father symbols, you will need to at least generalize the notion of fatherhood.

On the other hand, you should also remember that the symbol of fatherhood is different in every culture. For example, in the African setting, the mother takes the role of providing for the family while the father is the protector of that family. As you dig deeper into the meaning of father symbols, you will notice that they are just as prolific as the mother symbols. In most of the cultures, fathers are usually under appreciated than mothers. This is because most of the children tend to spend time with their mothers than their fathers during childhood.

On the other hand, the mothers are usually more nurturing, compassionate, emotional, and healing more than the fathers. The fathers, however, takes the role of being a supporter of the family. In most of the cases across many of the cultures, the father figure is the foundation of the family. You will also realize that there are specific life lessons that only a father can provide to a child. For example, in contemporary societies, the father is the provider for the child’s basic needs and clothing. Also, they take the role of teaching their children how to be responsible and respectable adults.

Symbols for Fathers: Symbolic Meaning of Being a Father

When you’re looking at the meaning or significance of father symbols, you will also have to look at the unique attributes that they contain. For example, the father symbol has characteristics like order, authority, support, stability, sacrifice, protection, action, logic, regulator, and teaching. In most of the cases when a man realizes that they are a father, they are Primal Instincts kick in. This means that they are going to be more assertive hence portraying a lot of dominance.

Also, a responsible man will take up the responsibility of his family with bravery and commitment. This means that they will work harder at their workplace so that they can provide a better life for their family. However, these are some of the values that the children all the family, in general, tend to overlook. This means that they are appreciative of their father’s efforts. Despite all this, you should remember that your family is your responsibility as a man.

Therefore, regardless of the situations or hardship that you face, you still have to take up the role of being a good father. You should also remember that in the current world, mothers also take the purpose of providing for the children. Therefore you should be more assertive in your position as a parent and involved. This means that the child is most likely to connect with the more involved parents than the provider.

Symbols for Fathers: How Many Mythologies Represent The Father Symbol

The symbolism of a father has great representation in many mythologies across the world. Therefore, it can be an excellent source to learn about fatherhood. You can also take your time to model yourself along with such mythical traits. Some of the Father symbols you will find in some of the mythologies concerning the gods. Here are but a few of them to help you get a grasp of the meaning of father symbols.

Jupiter was the Roman sky god; therefore, he was the supreme god of that period. This means that Jupiter at the final rule over all things. The Romans also referred to him as the father of civilization. This means Jupiter had a lot of wisdom and will rule soundly over the Roman people. Therefore, his meaning also has an association with that of strength and bravery.

The symbol of the Greek god Cronus

The symbolism of Odin

Odin father is the mythological god of the Norse people. During his reign, he managed to father children like Thor. Ancient documents depict Odin as an authoritarian ruler with a lot of wisdom. They also consider Odin as the father of all creation; therefore, he is one of the oldest deities.

The symbolism of Horus

The role of being a father is one of the primal pride that most men can have. This is because it brings down with it the symbolic meaning of Duty, action, providing, protection, guidance, and love. The fact that you’ve had an opportunity to be a father shows you that there is a meaning of continuity. This means that your will, Legacy and your name as a chance of living on through your children.

In a traditional setting, our father took the responsibility of teaching their sons how to become men. This is one of the symbolic meanings of fatherhood that is slowly disappearing in the contemporary world. However, I would like to encourage all those who are fathers to take time from their busy schedules to help mold their children. It is not just enough to provide for your family, but you should also take time and spend it with them. You will find that your children will be more appreciative of such little acts more than the wealth that you provide to them.