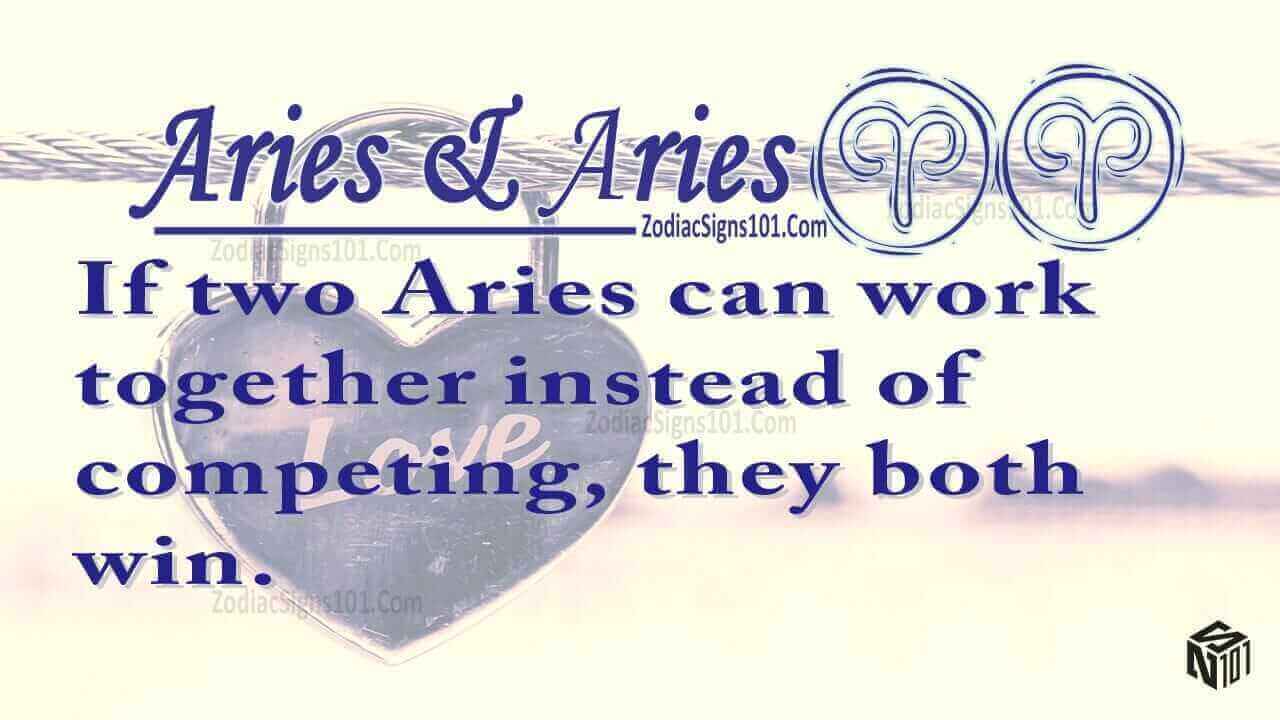 What do Aries and Aries zodiac signs mean in relation to their compatibility?  Will they be able to connect on all levels or will they struggle to find any common ground?  Is there a chance for better compatibility if two people share the same sign or is this more likely to lead to a dysfunctional relationship?  In this article, you’ll find out all about the compatibility between two Aries in a relationship.

Aries (March 21 – April 20) is a zodiac sign under the fire element and is ruled by Mars.  In mythology, Mars was the Roman god of war:  a leader of courage.  When both of the people in a relationship are born under the sign of Aries, they share common traits of adventurousness, enthusiasm, and independence.  They also have strong personalities and know what they want.  This works well when they both want to try their own things.  At the same time, they can also be generous.

However, both Aries can be self-involved when their optimistic goals are strong, and they want to be able to achieve all of the goals they set for themselves.  This can lead to powerful arguments when push comes to shove for a short-tempered pair.

No one else understands an Aries’ hard-working drive toward success like another Aries.  Both men and women are enthusiastic about the work they do and their successes.  They’re the ones who will take risks if it’ll bring them to their goal.  Their energy and go-getting attitude often make them the one to follow in work and play.  Aries are also good friends to have.  They care for those in their inner circle and treat them with generosity and protection when their friends need it.

Dating an Aries is fun and full of energy.  The beginning of a relationship with two Aries may be the best part of their lives as they’re both working to gain the attention and affection of the other.  With their adventurous souls, they’ll try new things together from rock climbing to sky diving.  They’ll thrive on how far they can go.  The only thing that may hold them back is when the other Aries wants to go on a different trek.

The greatest challenge they’ll face at that point is agreeing with their partner.  Aries likes to lead, and one of those Aries will have to step back and let the other one lead for a while.  Another option is to allow the Aries partner to pursue their own hobbies and interests so that there is less competition between the two.

In terms of a sexual connection, two Aries in the bedroom take on that challenge with the same level of energy and passion for work and play.  Each one enjoys showing the pleasure they can bring to the other.

They can be unpredictable and full of excitement as if they want to try every position in the book and then make up their own.  Both will want to dominate and be aggressive to bring their mate to pleasure.  Not many signs can match or keep up with a passionate Aries, so a sexual relationship between two Aries will be as strong as their bodies can handle.

While the two Aries can match their energy and passion to make a compatible relationship, their similarities can also pull them apart.  Both of them are possessive and one may become clingier when they feel their relationship threatened.  This is possible as Aries is as flirtatious as they are jealous.

For two energetic, go-getting individuals, their enthusiasm has a breaking point, too.  If they get bored or impatient, they’re likely to move on as they lose the desire to stay in a project or relationship.  When one Aries takes the lead in the planning and activities or who they want to spend time with, this will not bode well for the other Aries who wants their own say or has their own plans.

It’s also important for Aries to remember their filter.  Because they can be impulsive, they may say or do something that can offend or upset another, especially another individual born under the same sign.

Their stubbornness is also a trait that can be more negative than positive.  They will put their energy into being right or victorious in a decision because they enjoy getting their way.  When two people won’t give in, even if they’re on the losing side, it puts more tension on the fun and adventurous dates.  Rather than declare a winner in an argument, both of them need to work together to reduce their competitive drive so they can enjoy themselves more.

Not only is stubbornness a powerful characteristic, but also selflessness.  When it comes to sexual compatibility, for example, Aries wants to show what he or she can give, and their Aries partner may struggle with receiving and vice versa.  Two people cannot always take the lead at the same time.  It will take some practice to discover life with their Aries counterpart every once in a while, where they can actively participate but not take charge.

Communication can be a strength for Aries because they’re clear when it comes to making their point.  The problem comes in when they speak so candidly that their quick tongue can get them into more trouble, especially with an equally-matched individual born under the same sign.

What can make these arguments worse, and it can get worse, is the Aries mood swings.  It’s inevitable with their high engagement with life that they can also sink into lows that feel like everything is going wrong and out of their control.  They can become childish with tantrums and outbursts because they didn’t get their way.  The pressure people born under this sign put on themselves can be a part of insecurity that they have.

Despite their optimistic nature, they also have self-doubt that they don’t reveal to others.  Again, another Aries can relate to these mood swings.  Rather than let their emotions get away from them, they can work together to rein in those emotions so that they can take care of their relationship.

When it comes to compatibility, these two signs have many similarities that can match each other in positive ways.  They can match each other’s energy and enthusiasm but are comfortable with themselves to do things independently.  They will take care of the ones they love and want the same in return.  Any negatives can be worked out through communication, compromise, and patience.  A relationship between two people of this sign is compatible so long as both people involved follow their heart and learn to control their impulses.