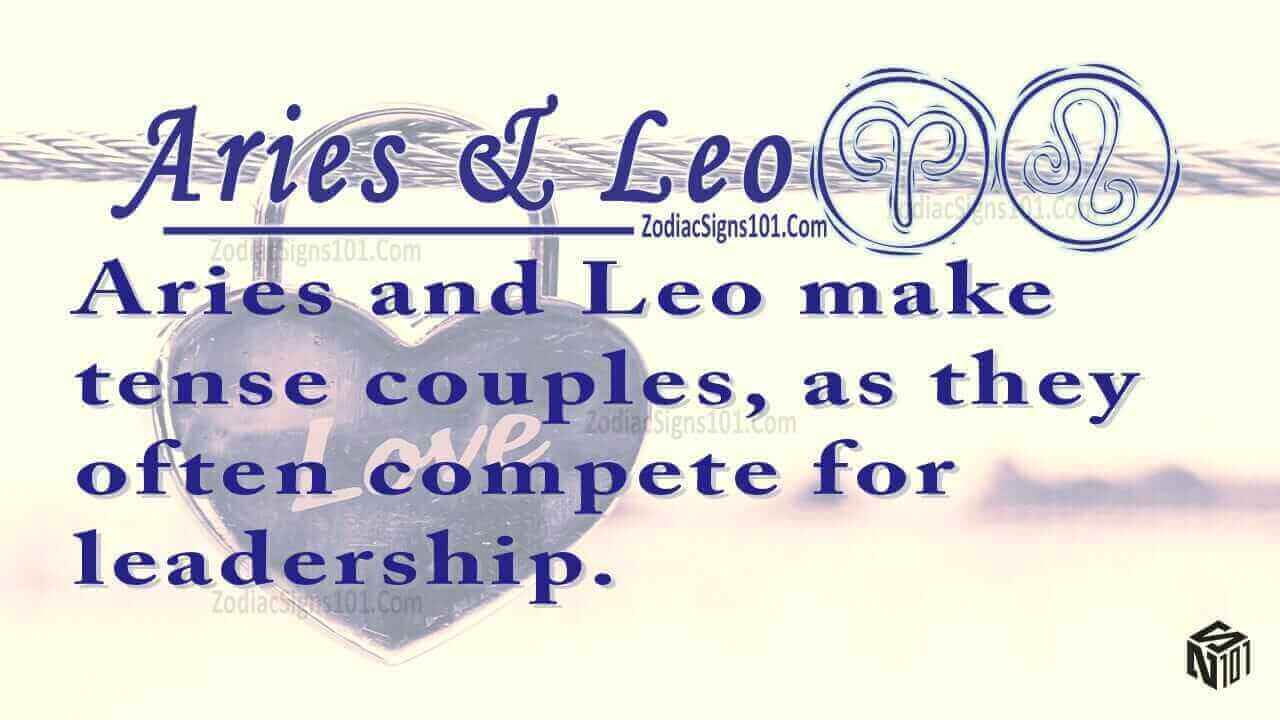 What do these two zodiac signs mean in relation to their compatibility?  Will they be able to connect on all levels or will they struggle to find any common ground?

Aries (March 21 – April 20) is a zodiac sign ruled by Mars.  In Roman mythology, Mars is the god of war.  Confidence and courage are just two words to describe someone born under this sign.  They exude charm and are often chosen as leaders, a position that they’re happy to take.  Part of that leadership role is that they’re in charge of situations and have the ability to choose an independent, more spontaneous path.  Aries loves their adventures and have the energy and drive to take risks in both work and play.

Leo (July 23 – August 21) is the zodiac sign of the lion and is ruled by the sun.  Those born under this sign are also very independent.  They want to accomplish most of their success on their own and aren’t fans of being told what they need to do.  This type of personality is ideal for leaders in their field.  Leo still cares about the support of their family and friends and encourages those who encourage them.  They also love an adventure and are likely to arrange some type of activity with their circle of friends.

Can two born leaders in work and play be compatible?  Competition is a given as they’ll rival to be the best in what they do in a relationship.  They believe so much in themselves that they’re likely to butt heads rather than compromise or agree.  At the same time, they’ll mutually respect each other and admire their drive and passion for what they do.  When they can take turns being right or being the decision-maker, they’ll continue to share that respect with each other.  Aries can be impulsive, but they can find trust in Leo as an equal to consult on new ideas and adventures.  Both signs can be flirtatious, so will that create more conflict or will they be secure in their relationship?

Positive Attributes in an Aries/Leo Relationship

Aries and Leo have a number of common traits.  For one, they’re a match in strength and energy.  They both love to go on their adventures and challenge themselves to improve and be better.  When they appreciate these qualities in each other, they have the ability to strengthen their bond as a couple.

Their difference comes into play in how they show their strengths and qualities.  Aries is outgoing and isn’t shy about showing the world what they can accomplish.  They want to stand out.  Leo loves attention, but not in the same way.  When Leo demonstrates his or her strengths, they do it for their own recognition of success.  In some cases, they’ll prove it to their boss or demonstrate it when they want to prove their point.  Leo will do the task at hand to the best of their ability, but not often take it further.  Leo can work well with Aries’ nudge to want to be more successful in the things they do.

These nudges are also a part of their companionship.  Aries and Leo make great friends who enjoy each other’s company.  Even if the romance doesn’t hold between these two, they’re likely to remain friends.  It’s not just sexual chemistry that keeps them together (though it can be amazing and exciting), but mutual respect and pleasure of conversation between them.

Negative Attributes in an Aries/Leo Relationship

Both Aries and Leo love to flirt – Leo especially – and Aries can be possessive to the point of anger. Even if Leo craves that kind of attention, it doesn’t mean it has to end in blows. Aries needs to remain calm while Leo needs to keep the flirting in check before it leads to irreparable damage.  It’s also wise for Aries to look for signs that Leo wants attention.  This could be as simple as an acknowledgement of a new hairstyle or the right answer to Leo’s question.  Aries isn’t always in tune with emotions and feelings and can come across as cold or direct. They’ll certainly be courteous and accommodating when someone, like their Leo partner, shows the same courtesy in return.

When two signs like Aries and Leo want to be in control it can lead to many arguments.  Aries can be impulsive and not think everything through while Leo can be more of a control freak.  Even if they disagree, Aries and Leo will be able to move on and won’t hold a strong grudge.  They need to be able to make compromises and take turns when the time comes that they cannot participate in something equally.  In the end, they may find that one or the other is better at something. This can make the whole experience more enjoyable.

When it comes to Aries/Leo compatibility, these two signs have a strong love that is honest and true.  They also have a way to support one another to make them successful in their lives.  When Aries has the next big idea, Leo has the know-how and determination to see it to the end.  They work well together and know that their combined efforts help them achieve so much.  They can play as opponents or as partners.  Even their competitive natures can be to their advantage as they will support each other.  There are plenty of directions they can take for their next adventure together and they both have the strength to do so.  When they recognize and appreciate each other’s strengths, they’ll find that there’s nothing that they can’t do together.