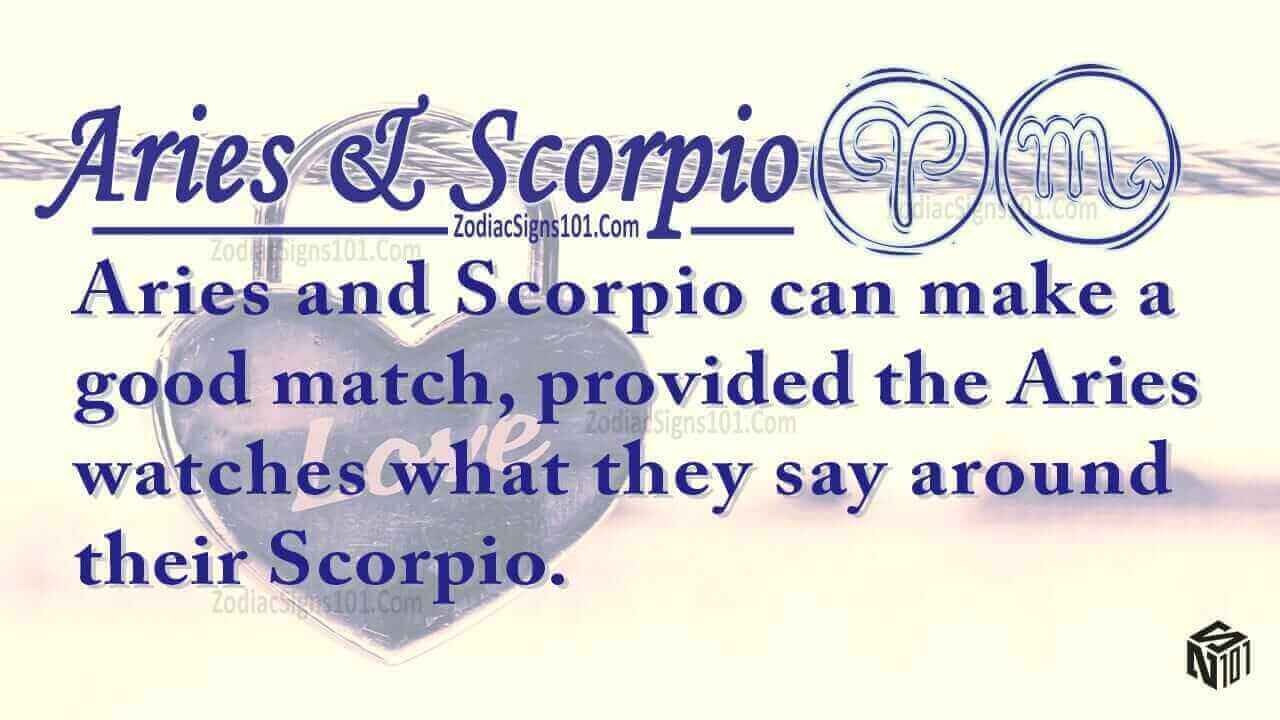 What do these two different zodiac signs mean in terms of their relation compatibility? Will they be able to connect on all levels or will they struggle to find any common ground? Here we take a look at the ins and outs of an Aries/Scorpio relationship.

Some of the most recognizable characteristics of Aries (March 21 – April 20) involve how they make themselves known in a crowd. They have the charm and charisma that attracts others to them whether they’re at work, home, or play. Mars, the ruling planet for Aries, is named after the Roman god of war. They’re natural leaders and work hard to make their ideas come to fruition. If they’re the one coming up with the next great idea, they’re also likely to manage the project despite risks. They make decisions with confidence but can sometimes be stubborn when someone isn’t on board. Aries also has a passion for adventure and holds strong to their independence.

Like Aries, Scorpio (October 23 – November 22) is a determined and independent individual. In contrast, however, they’re more of an introvert and prefer to do things on their own. They’re resourceful and have an eye for detail. These are good traits for work that will help them with their ambition to achieve great things and be the one in charge. Scorpio is ruled by the planet, Pluto. While they may have some friends, their desire to spend time with them varies depending on their mood. They’ll want to be in charge, and when their partner has proven their truth and love, a relationship with Scorpio can be exciting and romantic and sexually playful.

The chemistry between Aries and Scorpio will instantly attract these two signs. Both of them love to be in charge, and it may become a challenge of the heart even though it all seems a bit crazy at first. Even with a few similar personality traits, they can be very different from one another. Because of those differences, their relationship will never be dull. An understanding of each other’s personal, social, and sexual needs will make these two signs very compatible.

Positive Attributes in an Aries/Scorpio Relationship

Aries is the kind of personality that’s a mover and shaker. They have the ideas and the motivation to make things happen. Scorpio is more of a planner and takes time to consider all of the strategic moves and possibilities that can lead to success. When these two are together on a project or a goal, they work very well together. Their traits complement each other well. Aries needs to be more thoughtful before leaping into every unknown while Scorpio can still demonstrate their skills and strengths mentally without having their shyness get in the way. They work well as a team in business or in their personal lives because they have their own checks-and-balance system that will keep them successful.

There will also be times when Aries has engagements to keep whether it’s work or social-related and Scorpio wants time on their own. This will appeal to both of them and their independence while keeping it exciting when they reconnect later.

The energy that Aries brings into the physical relationship is ideal for the creative ways of love that Scorpio can use to keep sex interesting for a long, long time. Not only are they totally engaged with each other when their relationship is on a high, but when they get into arguments, which happens quite a bit, the make-up sex is just as amazing.

Negative Attributes in an Aries/Scorpio Relationship

As mentioned before, Aries and Scorpio can get into a number of disagreements and arguments. Their arguments often they stem from feelings of envy or jealousy. When one gets started, the other stands their ground and the drama ensues. In the case of Aries, they may impulsively follow one of their ideas that hasn’t been fully thought out, and that will drive Scorpio crazy. On the flip side, Scorpio can get clingy and Aries doesn’t want to be held down for anything. This is also true in conversation. Aries is notorious for speaking their mind and being brutally honest. Scorpio can be sensitive to the truth and bottle in the emotions since they’re not as outspoken. All of these pent-up emotions can start an argument that Aries did not expect to see coming.

Aries is also one of the first of the signs to lose interests in things, including relationships. If Scorpio wants to be in a long-term relationship with Aries, they’ll have to keep things interesting. This means that they’ll have to be creative to keep the spark. Aries is able to commit to a long-term relationship, even marriage, but they’ll need to slow down to show that they’re committed to Scorpio. This may mean a compromise when it comes to socializing or going off on every adventure that comes along.

Scorpio also needs to learn how to compromise and ease up a little bit. When they try to hold on to Aries too tight, they may use sabotage to keep Aries from having fun with others. They should also not let any failures or stumbles along the way be a focus on failure. Instead, they should see it as a stepping stone to learn how to deal with problems better later. Arguments may be that learning moment that Scorpio needs.

When it comes to compatibility, Aries/Scorpio relationships can work, but it will work best long-term when they learn what makes each other happy or annoyed. These two know how to have fun, especially with Aries leading and Scorpio making sure that it happens. They also know how to complement each other in how they think and act, but they also need to remember to complement each other to build on their need for attention.

Most importantly, they will appreciate their compatibility when they try to relate more to each other. Aries is very spontaneous and has a hard time focusing on completing a project to the end. Scorpio is more factual and consistent and not as flexible to change. When Aries takes on Scorpio’s advice while Scorpio follows Aries’ example to loosen up a little to have more spontaneous fun, they will see how much they are compatible and appreciate each other more.