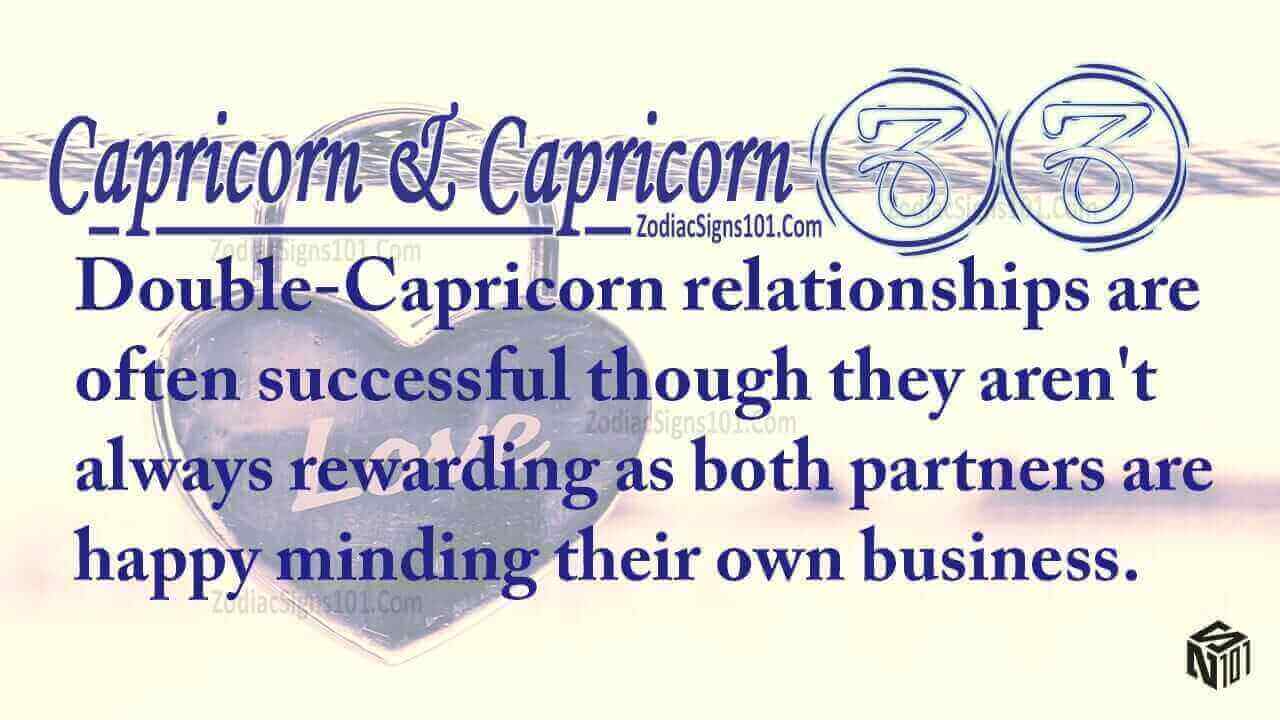 How will a relationship between two Capricorns play out? In this article, we take a look at Capricorn Capricorn love compatibility.

Capricorn (December 23 – January 20) can be successful in their life because they make it one of their primary goals.  They work hard to achieve what they want to earn on their own.  They’re the type of individual that aimed to be valedictorian of 8th grade, high school, undergraduate, AND graduate school so that they can prove that they’re at the top of their game.

They want to be at the top of their careers and intend to do much of the work on their own because they’re confident in their abilities. They prove this by turning in work that’s done with attention to detail and promptly.  It doesn’t take long for their boss to recognize them for the work they do.  They’ll eventually have to work with a partner or a team, which isn’t where they’re most comfortable.  However, they make it work for them by taking charge, delegating as best as they can, and making sure that everything is as close to perfect as possible.

Failure is never a consideration. This level of perfectionism often means that they put a lot of pressure on themselves. It also takes effort not to have their emotions get in the way of their work.

Because of their determination to succeed, they come across as boring because they’re “all work and no play”.  Still, they do have friends and help them when they need it.  That doesn’t mean that they’ll accept their help in return if offered.  Those who’re close to them know that they’re good conversationalists with a lot to talk about.  They also know that Capricorn is a loyal sign who wants people to accept them for who they are.  Since they don’t like change, they have no intentions on changing who they are.  When it comes to love, they’re looking for someone who shares their traditional values to raise a family, build a secure and stable home, and being loyal to each other.  They aren’t focused on trying new things or seeking adventure.  What they want is to be the best they can be and be happy with who they are and what they have achieved.

Capricorn is known for being hard working, so it’s nice for them to find someone who shares their work ethic. Their efforts are rewarded by the gains that they make in life.  Eventually, they’ll climb as high as they can go in their field or their place of business before they become the boss of the company.  No one will understand the effort that it took as much as another Capricorn.  They want to have a reputation for being an outstanding contributor to society and the community.  No one else understands that their goals reflect the traditional values and stability they want in their life more than someone who shares those values and intentions.  They want to feel stable and secure in their home, and they do that by making smart financial decisions and taking calculated risks.

The stability they make for their home is the stability that they can expect from each other in their love life.  They’re compatible in the bedroom because they put their energy and efforts into showing how much they love and trust each other.  They may not be the most adventurous through toys and roleplaying, but they’re known for working together with the lover they appreciate in their life.

What makes this couple so compatible is that they understand each other physically, mentally, and emotionally.  There aren’t many other signs that have that kind of understanding with their partner.  They’ll find it refreshing to be with someone with whom they can work together, play together, and love together.

One of the problems with two Capricorns dating another Capricorn is that they can’t find balance in their lives.  Since they’re both workaholics, they don’t know when to shut down the computer or stop thinking.  They see what fun is, but they don’t know how to make themselves relax and de-stress.  They also don’t know how to tell their partner to do the same. An annual trip to a beach away from phones and emails to give them that break they both need.  The investment in a time-share may be the relaxation they can manage in their busy lives.

Their goal is to be secure.  They accomplish this by making money and being successful in their careers.  The job market can fluctuate at any time, and jobs aren’t always safe.  When expenses hit, or layoffs affect the Capricorn Capricorn household, that feeling of insecurity can create a lot of tension.  If they cannot provide for an undetermined period, they’re likely to take their fear out on their partner.

Capricorn likes to put their best foot forward because they want to look as successful as they feel.  Not only will some of their finances go toward the home of their dreams, but they’ll also invest in the appearance of their goals.  If they feel that younger looking skin makes the promotion, they’ll turn their investments into plastic surgery for their future.  At the same time, they expect their partner to look the part as well.  They want to keep their reputation as pristine as possible.  If there’s a secret, they won’t share it, even with their partner.  That can cause their problems when they feel like they can trust each other.

When it comes to compatibility, two Capricorns are great together because they understand each other and have compatible goals.  At the same time, they have to learn to love the person they’re with and trust them with anything, even if it puts them in a less-than-glorious light.  When they’re with someone who loves them as much as they do, they can make anything work to their advantage.  Most importantly, they need to remember to relax and enjoy each other more than their status.  Their reputation is only part of who they are, it’s their love for each other that should mean the most.