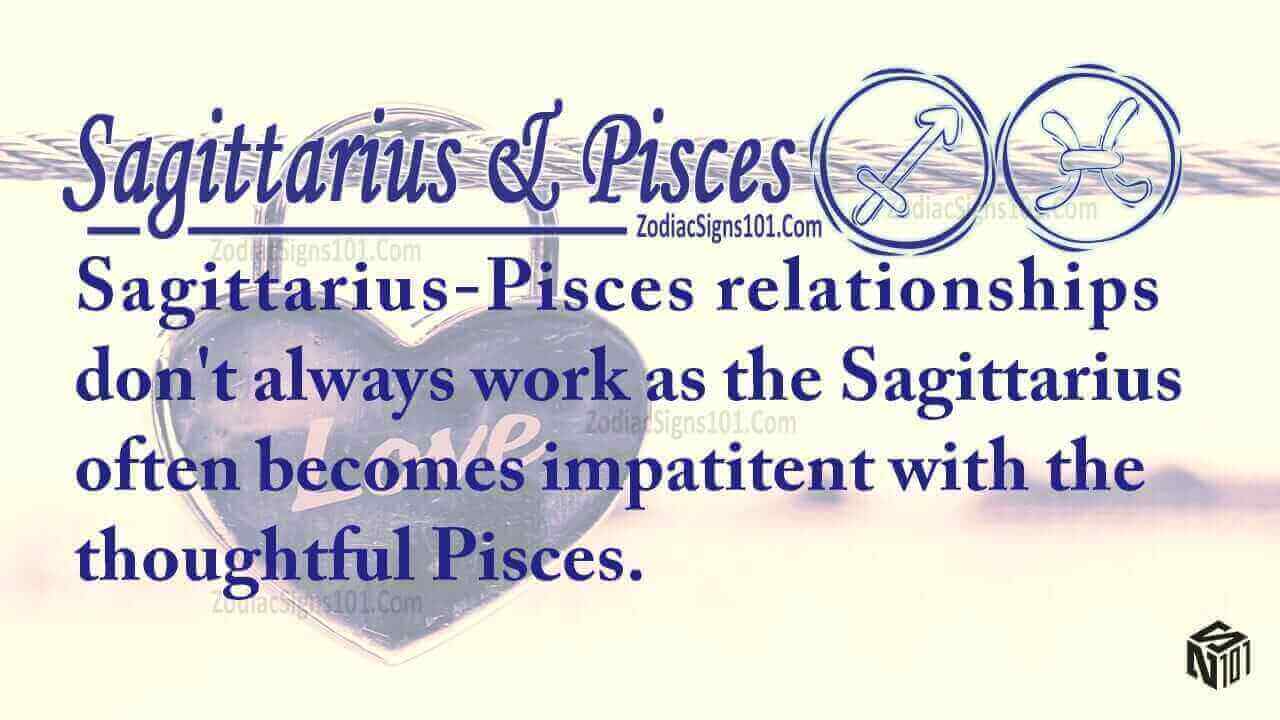 Will Sagittarius Pisces Love Compatibility lead to a happy and fruitful long-term relationship? Read on to find out.

Sagittarius (November 23 – December 22) has many friends because he gets along with almost anyone he meets.  Their conversations are full of creative and fun ideas, as well as connections to experiences and adventures.  They know what they’re talking about because they love nothing more than to experience life.  Their flexibility makes it possible to drop some of the things that may be going on to be on the next plane or train if someone asks.  They’re just a free spirit who wants to spend more time living than doing boring things in life.  When Sagittarius is looking for love, they want to be with someone who likes a little adventure and a lot of fun.  Their independence is non-negotiable because it’s an integral part of their personality.  They will, however, show their appreciation for their lover with gestures and gifts and will keep them happy as long as they’re happy.

Pisces (February 20 – March 20) is one of the more emotional signs of the zodiac.  They may come across as shy, but they prefer being around other people.  Not only do people encourage them to do many things that they may not have otherwise tried, but they’re also good at keeping them grounded.  Pisces is very creative because they’re often dreaming up new ideas and finding themselves in another world.  This can be a challenge when they’re trying to get a task done.  They’re very intuitive about other people’s feelings; they know when they’re happy, sad, hurt, or in need of something.  Not only can they sense these things, but they’ll take care of the issue if they can.  Their intuition makes them great lovers as they try to please their partner, but they’ll also need someone who can support their emotions too.

The romance between Sagittarius and Pisces is one of fairy tales and bedtime stories.  They’re full of love for each other with an eagerness to share ideas and dreams.  They want to make the other happy and have the ability to do it.  However, they have to be able to see a future beyond the “happily ever after” ending or else the reality of their compatibility will come to a shocking end.

Sagittarius loves to be the guide.  They want to try new things and take others with them to share their insight and perspective.  It’s one of their goals to make the people they’re with happy.  Pisces will be satisfied because they’re excited to be taken under their wing.  Both of them enjoy being with people, but Sagittarius is more social and makes friends easily.  They’re happy to introduce their shy partner to others so that they can be a part of the experience.  They’ll protect them when they feel uncertain and care for them when they need someone to lean on.

Additionally, they’ll show their appreciation however, they can.  Together they can have the best of both worlds with nurturing love and adoration.

Both of these signs are very physical in their love.  If there’s a couple that always seems to be touching their partner’s arm, holding their hand, or playfully swatting their backside, the chances are good that they are a Sagittarius Pisces couple.  There doesn’t have to be intensity to their loving, but it’s fulfilling to their sexual and emotional needs.

Both of these signs can be sensitive, but Pisces especially so.  Sagittarius has a problem thinking about what they say before it escapes their lips.  Their blunt and rude comments may have been intended to be cute and funny, but the hurt they cause is no laughing matter.  Pisces is a sign that’s often looking for encouragement and acknowledgment of the good things that they do.  Hurtful words can do more harm to their self-esteem than perhaps other signs.  It’s important for their partner to be more thoughtful about the things they say.

Sagittarius also has a problem with punctuality and timeliness.  They aren’t likely to keep track of birthdays and anniversaries.  They’ll eventually get around to acknowledging it, but that isn’t enough for their partner.  Pisces isn’t looking for a gift, but the recognition of the day and event that’s so important to them.  No amount of sweet words and elaborate gifts can fix that kind of hurt.

As mentioned before, Pisces is a more emotional partner.  Not only are they sensitive about the things people say or do, but they’re likely to blame others for the negative things in their life rather than take responsibility for it.  For example, they’ll believe that they didn’t get a job because the recruiter didn’t like them rather than they did not have all of the qualifications for the positions.  This sign will also cling more to their partner when they’re feeling needy, which can be problematic for independent Sagittarius.  Their adoration and needs for a strong personality in their life will tug at the heartstrings of their partner who wants to play the role of the protector.

When it comes to compatibility, these two signs have fantastic chemistry and symbiotic relationship.  The two of them take care of each other by protecting them from their weaknesses and allowing them to play on their strengths for the good of the couple.  They have so much that they can enjoy from each other, but their personalities can also cause drama for them.  Sagittarius can be in the doghouse for hurting their partner’s feelings by the things they say and by forgetting things that are important to their partner.  Pisces can use their emotions to get what they want, but they can also get too caught up in the fairy tale love affair that they don’t take responsibility for their actions.  These signs will love and care for each other, but they cannot let their weaknesses dominate the ending of their story.