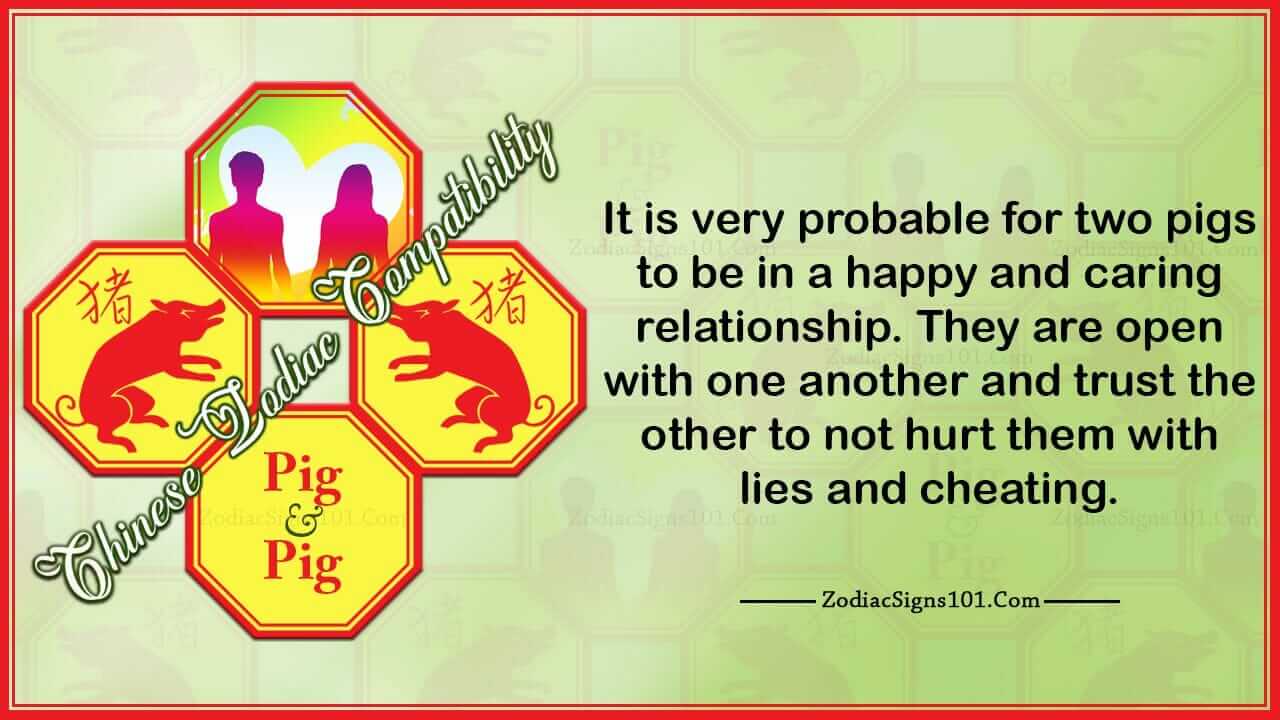 A common worry when two people enter a relationship is whether or not they are going to be compatible enough, even in Pig Pig compatibility relationships. One way to check if the couple will work is to look at the years they were born and compare. What if they were born in linked years or even the same year? Well, this article will take a look at the compatibility of two people born in the Year of the Pig.

Overall, Pigs are caring, gentle, and polite people. They are strong at heart, loyal, and kind. These people do not lose their temper easily. They always try to look on the bright side of things, and they are pretty tolerant. It should be noted, however, that they do not like fights. If things get too heated too quickly or for too long, you should not be surprised if they leave the situation as quickly as they can. Though Pigs are not fans of fights, they do not shy away from problems, even the hard ones.

The Want of Sensual Comforts

Pigs are people that can not get enough comfort. They love good food, naps, long and relaxing baths, fine drink. The want of these comforts can extend into wanting more time with each other. Since the want will be mutual, neither member of the relationship will feel as though they are being pressured or smothered. Chances are, both of Pigs will be basking in every second they get together. 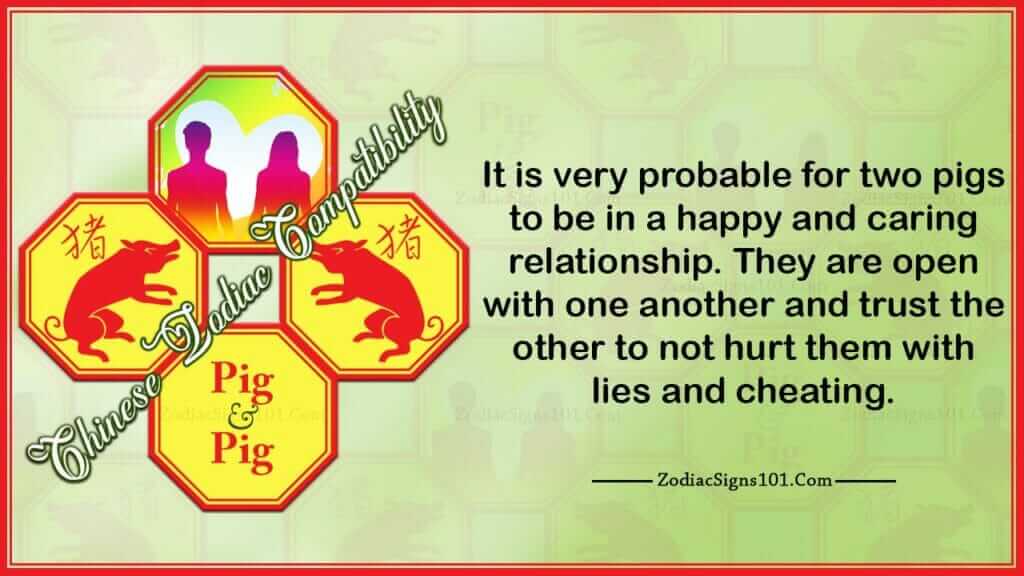 No matter what is a Pig might be getting into, they give the topic a lot of thought. They make sure to weigh the pros and cons before coming to a decision. It is likely that they will be doing this the idea of a relationship. This is a good thing. If they have any doubt or question in their mind, they are not likely to go through with the relationship. This makes it easy for both parties in the long run. Even though there might be some hard feelings at first, it saves both of them from heartbreak later on.

That being said, it can be safely stated that the relationship is going to last a long while. This is because both parties are so sure that it will go well and neither of them are likely to give up on each other. Remember, Pigs are not ones to shy away from problems.

Pigs are very trusting and loyal people. Two Pigs together in a relationship can be great because it means the chances of them breaking up because of jealousy are slim to none. They are open with one another and trust the other to not hurt them with lies and cheating. Because of their loyalty to each other, it probably will not enter their minds to do so.

Pigs are gullible people, maybe because of their loyalty. They put all their faith and trust in someone and suddenly something happens and they are blaming themselves for the falling out or failure. Pigs also struggle when it comes to communication. They might mean to tell you something and then forget to or it simply will not occur to them to pass on the word.

A Lot Will Not Get Done

Remember how Pigs greatly enjoy sensual comforts? That can get in the way of things that need to get done. Whether it is chores, errands, favors to friends, or helping family members, it will most likely be forgotten about because of the want they have to spend time together.

Unlike some of the other Chinese Zodiac signs, Pigs are very emotional people. They are more likely to make important choices based on emotions. Though they are strong thinkers, their hearts can heavily tilter their thoughts. They are not great at thinking about day to day choices logically. If it comes between going food shopping or watching TV and cuddling, they are going to want to cuddle even though they might be running very low on food.

It sounds like this would be a good thing, right? Not always. Since Pigs are emotional people and they hate fighting. It is not uncommon for them to let something build an issue build and fester. It might be something small but they try to ignore it because they fear it might start a fight. If the problem is ignored for long enough, it really does cause a fight. Instead of trying to hide what is bothering them, they should address the problem while it is small so it does not have the chance to build up and explode.

It is very probable for two pigs to be in a happy and caring relationship. Even though it sounds sweet and romantic that they can not get enough of each other, they still have some things they should work on. This way, they can function in day to day things. They do not have to worry about the other cheating on them. However, they should work on building that trust so it extends to cover small confrontations. This way, they do not have to deal with screaming matches later on.