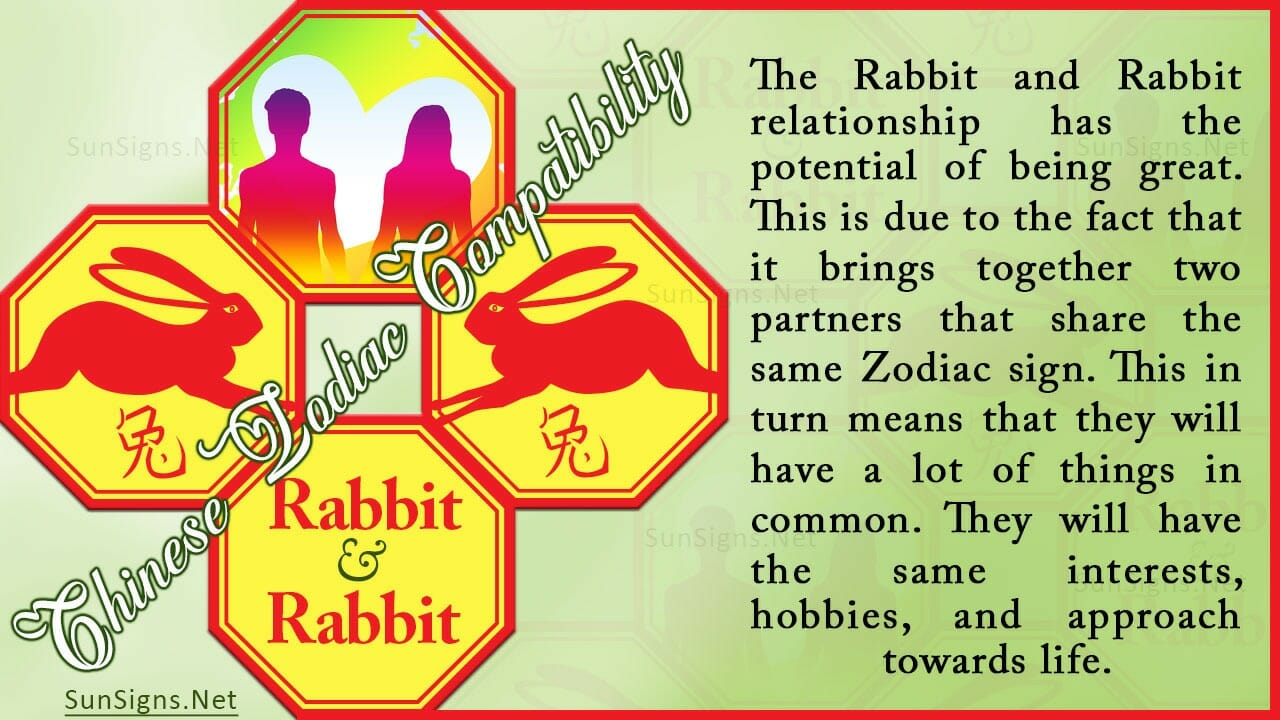 The Rabbit Rabbit compatibility has the potential of being great due to the fact it brings together two partners that share the same Chinese Zodiac sign. This, in turn, means they have a lot in common. They have the same interests, hobbies, and approach towards life. These similarities make it easy to get along with each other. However, they are idealists and live in a dreamland rather than reality. It might prove to be hard for them to create a strong partnership. They have to adopt a stable lifestyle and live up to reality for them to have a successful relationship.

The attraction between two Rabbits will be strong. They will be attracted to each other’s similar approach to life and will also be fascinated by the other’s personality and outlook. They share a lot of similarities since they have the same zodiac sign. This attraction will create the foundation for a strong partnership between them. Nevertheless, a lot of commitment and devotion will be needed from both sides if they want to make this Chinese compatibility work.

The Rabbit Rabbit relationship combines two lovers sharing the same zodiac sign which means they have numerous similarities. They dream of themselves meeting new people, travelling the world, and living in great places. They try to put in the required effort so they can achieve their dreams. Furthermore, both are sociable and adventurous. They love being out of the house where they meet individuals as well as discover new places and things. The two like to be surrounded by friends and companions they will love to spend time with. Due to this, they constantly host family and friends in their home. Since both are talkative, they engage in conversations to keep them mentally stimulated.

Rabbits are natural perfectionists. They love to make sure everything around them is perfectly done so they work to ensure they build a successful partnership. Their relationship will be filled with lots of love, affection, romance, and surprises.

The Downsides to the Rabbit Rabbit Compatibility

The Rabbit Rabbit compatibility will be met by numerous challenges. One major problem they have to deal with is brought by their varied kind of living. They love to be out and about doing different things and meeting different people. They are never stable and will put little or no effort into making their partnership successful. Both of them will need to step up their game and put in the required work to ensure the success of their union. Let us have a look at other issues face this Chinese compatibility.

Financial problems are going to face the Rabbit Rabbit compatibility. This is due to the fact that Rabbits are not good with their finances. They are neither good at making nor using it. They normally hop from one job to another because of their diverse way of living. Their partnership will be financially unstable since they will not have a stable source of income. Another problem here is that they most likely use the little money they earn on irrelevant things rather than food or bills. The partnership will work out fine if they are okay with having little money and staying in their dream world. Otherwise, one of them will have to take control of their partnership to make their dreams come true.

Rabbits love peace and harmony. They try to avoid problems as much as they can. A good way to solve issues is to talk about them. However, these two would rather avoid them than talk about the ugly truths of their issues. As long as everything is going well between them, this method can work out but this technique can leave important issues the backburner so not talking about their issues can send them further away from each other.

Rabbits are sociable and outgoing so they love spending their free time out of the house. While out, they meet a lot of people and discover new things. Due to their sociability, they tend to be emotionally distant and keep away from human emotions and feelings. This can be harmful to their partnership since their relationship will lack spontaneity and warmth. They have to learn to bridge the emotional gap in their union. Otherwise, they might have a hard time creating a strong bond between them.

The Rabbit Rabbit relationship is quite interesting. It can work out or fail depending on how they take it. The similarities attract the two Rabbits to each other. Due to their common way of doing things, it can be easy for them to get along. They are perfectionists and work effortlessly towards making their partnership strong. However, there are things they have to work on before they can achieve a happy union. They are both gregarious and might end up being so occupied they forget about each other. This is just one of the issues they need to handle to create a long-lasting relationship.