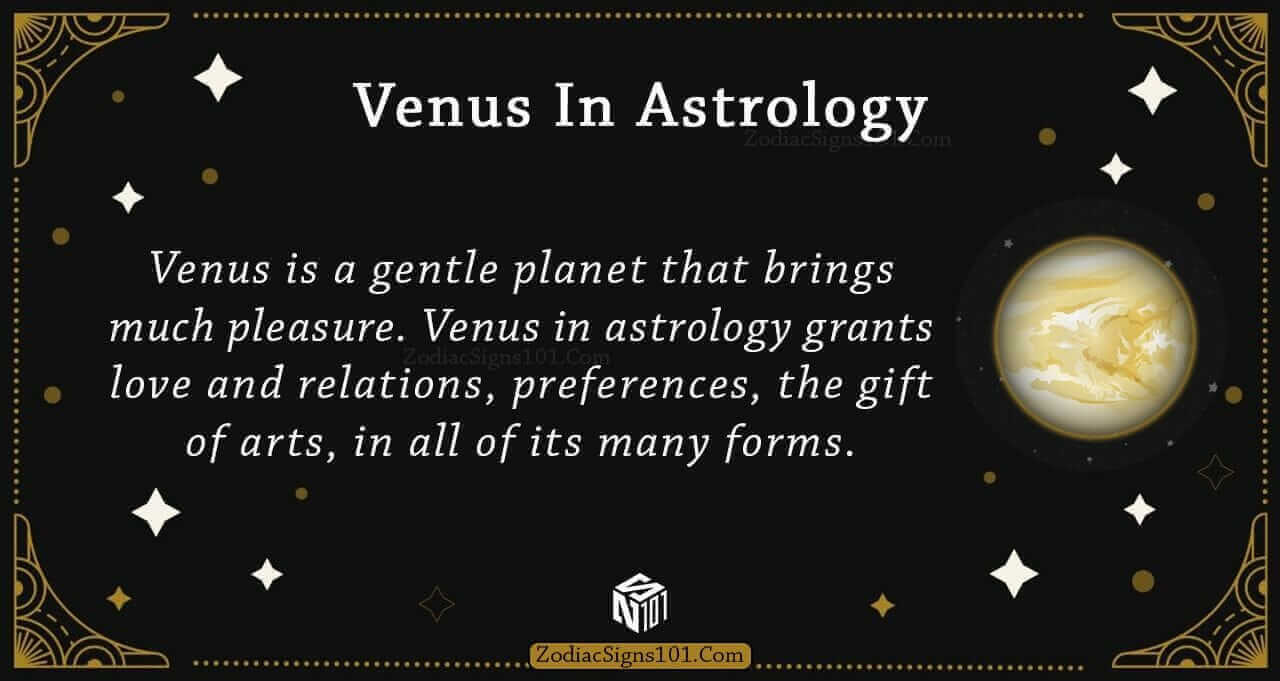 Venus is the goddess of love and beauty. People who follow this planet do not do well with physical work, but rather prefer the arts, in any sense they can get their hands on. When it comes to what Venus in astrology rules, the planet also rules over wives, mistresses, girlfriends, and sex workers.

Venus is linked to two zodiac signs. The zodiac signs under Venus are Taurus and Libra. These signs have several things in common. Though both are fairly materialistic, they want different things. Libra prefers fashion, elegance, fancy dinners, and sophistication with luxury compared to Taurus’s food and spoiling the other senses.

In the layout of the Solar System, Venus is the warmest planet, which makes sense in it representing love and human connection both to each other and objects. The planet itself is heated by a greenhouse effect created by the sun and has quite a number of volcanoes on it. Venus is fairly close to Earth so it appears to be the brightest of the planets that are seen from it.

The planet Venus likes to set itself apart from the other planets in a couple of ways. This planet spins backward to all the other planets and it is one of the two planets (excluding the Moon) to be named after a goddess, rather than a God. Venus is clouded in a deep curtain of fog so it is hard at times to see what the surface is like.

Once every 18 months, Venus goes retrograde- spins backward (forwards to the other planets). There are two different sides from which you could choose to view Venus when it is in retrograde.

The first way is to see it as an annoyance that causes relationship problems.Sometimes a person’s mood may change dramatically. If the change has something to do with romance, then it is likely caused by Venus. So yes, it can be a bit annoying, but that brings forth the second side.

The second side of Venus being in retrograde comes from seeing it as a chance to step back. If all of these arguments are springing up, then they must have been under the ice for a while, right? So instead of ignoring the issues and yelling them out, use them to make the relationship strong. Sit down with all the parties involved and talk things out. Make ties stronger.

For the most part, Venus in astrology affects women more than men.This does not mean that Venus is biased.To put it simply, it just is what it is. With Venus being the only female planet, it would make sense. Venus is considered to be the most feminine of all the planets.

Women are often more attracted to the arts than men are. This doesn’t mean that men cannot enjoy the arts, though. However, Venus also knows when to step back and let girl power really kick in.

How Venus in Astrology Affects Personality

People who are led by the planet Venus are rather interesting. They are amazing in varying fields of art. They are pretty good reconciliations, enjoy harmony, and they are overall captivating.

While the goddess of love and beauty give these gifts, the planet also gives them a feeling of laziness and jealousy, it can be hard to tell if they truly care about things. They can also be a bit frivolous.

People who follow Venus are great fans of relationships. It does not matter too much to them where the relationship comes from. A friend, sibling, or another family member– anyone. They live off of emotional attachments and can sometimes become friends with coworkers to get work to feel less like work.

With civilization (in addition to the relationships and friendships) comes materialistic items and wants. Venus in astrology is the one that allows people to know what it is they want beyond survival needs. Like how Venus helps everyone to find love with other people, it helps them to find joy in items, foods, and other habits.

Tying a little into civilization, Venus in astrology grants people refinement. Everyone has a personal preference for what they want. Which silverware they eat with, what fabrics they like, which pens and style clothing they want the most of. Venus gets in touch when they are gift shopping as well. When one is trying to find a gift, they have looked everywhere and suddenly they find the perfect gift. Venus helped them to find it.

Venus in astrology always plays a large role in what kind of art people go into and what they produce. For example, people can become painters, sculptors, dancers, writers, and more.

Venus is the goddess of beauty and love, so it would make sense for someone being heavily lead by Venus to want a job in something with aesthetic outcomes. Things with art, fashion, musician, dancing, jeweler, cooking or baking, perfume trader, theater, or poetry are all suggested pursuits.

All in all, Venus is a gentle planet that brings much pleasure. Venus in astrology grants love and relations, preferences, the gift of arts, in all of its many forms. Cooking and baking bring so much joy to people. The smells, tastes, textures, and different temperatures; the fun that comes from making them and the pride of when the dishes turn out right.

Even though Venus has its strongest effects on women, it is important to know that Venus effects and leads both genders, After all, even if men do not like the “dainty” fruitier drinks, they still like drinks, do they not? They still have a preference that is lead by Venus.