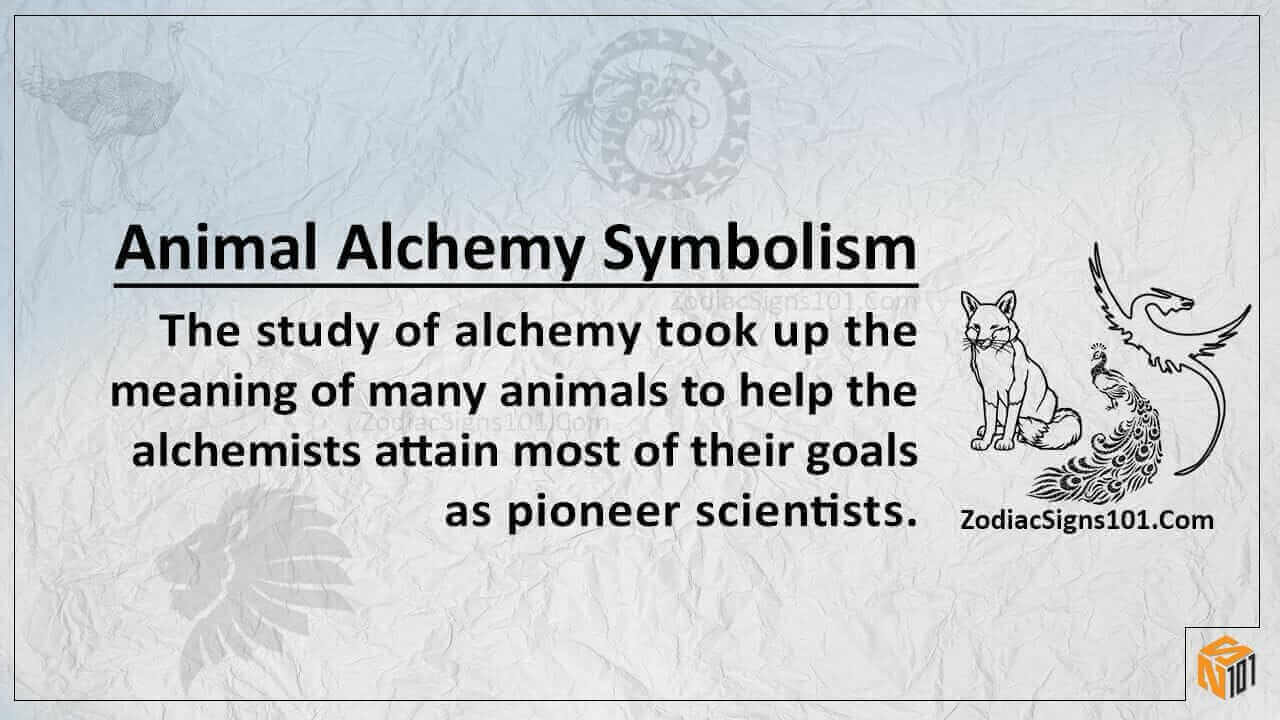 Animal Alchemy Symbols: Why is it Important to have Alchemy?

Did you know that animal alchemy symbols are one of the crucial arms of the art of alchemy practice? This is because their way of science involved the use of all the elements of the earth including the same animals. The art and study of alchemy follow up in some old lines of thoughts or philosophies.

According to those line of argument, the practitioners were able to form gold out of pure metals. Also, they thought that they could produce the philosophers stone to help them beat immortality. They also spent time trying to find an elixir of life. This would help them stay young and beautiful for their all life. Remember that I said that alchemy was some science or the origin of modern science.

However, in their practice, they had the idea that they could use things like mythology. Also, they had a strong belief in the dark arts of magic, religion, and spiritualism. Looking at the animal alchemy symbol is not a strange thing as their symbolism have been used elsewhere like in totems.

The study of alchemy took up the meaning of many animals to help them attain most of their goals as pioneer scientists. Here we shall look at some of the animal’s symbols that are present in this collection.

This is one of the mythological birds that many of the ancient orders believe in representing immortality. This is because the Phoenix could live for such a long time, die, burn up and come back to life. It was the embodiment of reincarnation something this ancient order was trying so much to attain. Therefore, some may look at it as the sole symbol of death and new life. Also, it means the process of purification by sulfur set on fire.

The fox was the main actor of the spiritual symbolism of the art of alchemy in the animal world. They had the belief that it was the key to attaining the ever elusive elixir of life. Like the wolf, the alchemist had the notion that it could change into a man during the night. In this period, the transformed fox had the right heart to pay a visit to the elderly and ailing folks. Also, they would carry with them an elixir of life and give it to the sick and dying.

Although its role in the art of alchemy was minute, it was still important enough for them to consider its contribution. As per the belief of the ancient practitioners of alchemy, the bird had such a strong stomach. Therefore, it could digest and break down anything that it ate. They found out that the bird such potent acids that were important in their work. Also, they would use this acid to work on the reversing of gold and silver back to the primary metals.

The mighty lion is the sole protector of the inner secrets and working of the practice of alchemy. This is because the lion was one of the most energetic animals on earth. Moreover, its symbolism associates it with attributes that were equally significant to the art of alchemy. Some of these traits include courage and strength. Apart from that, the lion as per its totem ranks under the solar animal totem. Therefore, it represents the most precious metal of the time, gold.

It seems that the practice had a particular liking of the birds like the peacock among others. The peacock was the ultimate symbol of the glory of the work of alchemy.

Moreover, it brought them the sense of being incorruptible, immortal and pure integrity. In their form and beauty, the peacock serves to remind you that you can also be better in life. However, you have to follow the simple principles that its symbolism has set.

This is one of the many birds in both the ancient days and the contemporary society that many affiliates with bad omen. They have some sort of eeriness about them that is somehow is uncanny. The alchemists, however, associated them with death and the disintegration of the human flesh. They would call upon the raven’s symbolism during some of their most difficult works or operations.

The ibis bird is the symbol of the other symbol of the moon on earth among the animal kingdom. It represents that lunar prospects of the moon in its entirety. This means that it also has a close association with the effects that the lunar phase does to the sea and oceans. This means the tidal forces that it has on the water bodies back on earth. The ibis is also a bird that symbolizes the act of transmutation of the moon. This happens when the moon changes o different phases that have a different meaning. Therefore, this is one of the many reasons why the ibis has a symbolic significance to the moon.

This is one of the most essential and universal ancient symbols of the alchemical animal symbols. It represents a snake/ serpent that is that somehow is swallowing its tail. According to the alchemist, it means the cycle of life especially in the matters of rebirth. It means that there is an endless possibility of life after death just like in the symbolism of the Phoenix. They say that it is the concept by which the souls get to be at peace with one life without an end. Moreover, life is just a cycle that never ends.

The animal alchemy symbols is a most enjoyable read with a lot of prospect of learning about their symbolism. Plus, you will also get to know the inner workings of the alchemists.