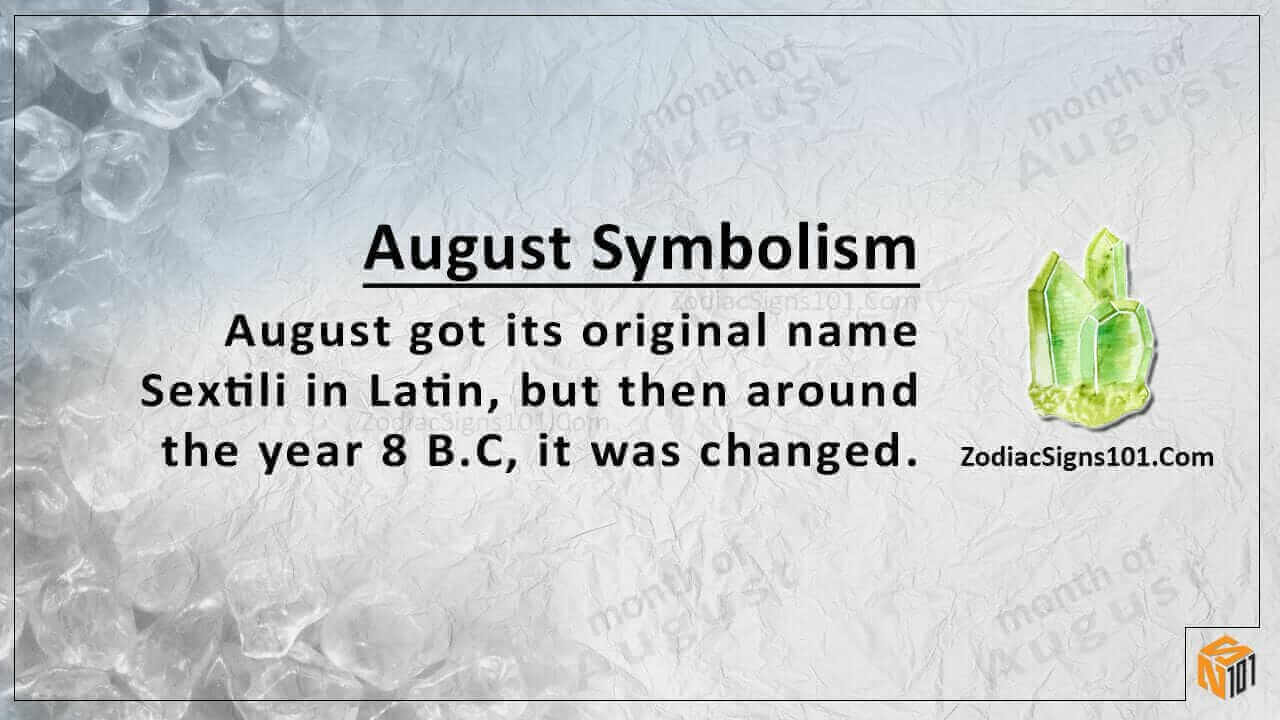 August Symbolism: What does it Mean to You as a Person?

Did you know that the August symbolism had meaning that could influence your life? Just like many other symbolisms around the world it too has special meaning. However, the definition may vary depending on the calendars of the people. This means that they will perceive it differently according to their cultures. August just like most of the months of the year have its origin in the Roman calendar. Plus, a long time ago it used to be the sixth month of the year till later years.

Later the first two months of the year were added, and this pushed it to number eight. August got its original name Sextili in Latin, but then around the year 8 B.C, it was changed. Thus, the name of August. Moreover, the name August comes from the multiple victories of Augustus in war. At that time, he would venture into battle, and around the Sextili he would attain great achievements including Egypt.

August Symbol: Spiritual Meaning and Influence in Our Lives

There is not much activity in terms of seasons taking place in August from the ancient days. However, there are some of the celebrations that occur in the South like Imbolc celebrations. Also, the 1st of August represents the Lughnasadh ceremonies. There is a close relationship between August and the serpent. The people around these regions believe it will guide you to let go of the past life.

Also, you will get the opportunity to weed out the things in your life that are holding you back. August is also a great month.  Therefore, its energy synchronizes well with the symbol of completion. It is that time of the year to make sure that your house is in order. Some of the things you may need to check on are your spiritual life. Take time to meditate and consult with the spirits to give the strength to meet your goals.

The energy of August will bring life and light to those that are in the dark and afraid. Also, it powers will reach deep into our dark sides and uproot the grief and sorrow that we may have. This month encourages you to battle negative thoughts and lean towards the positive ones. It is during this period that the powers of the August symbolism will also uplift our spiritual wisdom.

August Symbolism: Representation of the Zodiac Sign and their Meaning

The month of August has a significant association with two powerful Zodiac symbol. The signs are Virgo and Leo. Therefore, it represents and hosts the people that are born under these signs.

You must be a person that is warm towards other people if you fall under this sign. Also, you have the norm of being generous and kind to other people. The lion is your sign; therefore, you also have symptoms of courage and leadership. People will always come to you for advice. Plus, they will feel safe when you are around them due to the level of confidence and courage that you have. This means that you have a close association with the solar symbolism due to the association of the lion.

It is your month also if you belong under the Virgo sign. The influence of this sign makes you an observant and keen person. This fashion you a practical person; therefore, you always have no room for mistakes in your life. So, most people will call you a perfectionist, but the title positively suits you. Also, you will seem frugal with your finances, but this helps you be responsible for your investments. Socially you will also maintain people that are the same as you. You don’t like hanging out with people that are sly or cheeky.

August Symbolism and its Birthstones

The Peridot is one piece of a lovely green colored stone and has been around for many years. Even the Christian community recognize and value it as a sacred stone. Moreover, the Bible mentions it severally. The Pope of the Catholic church has a ring made out of the same stone. He does so in the effort to maintain and show the symbol of purity and good morals. Thus, their influence on August is surely positively. It has a way of helping people have a clear mind. Plus, it represents the symbol of beauty and lightness. Some people even believe that the stone has healing powers.

The sardonyx birthstone is the symbol of protection. Also, many people use it as a symbol of meditation. This is because it has powers that promote willpower, dignity, strength, and courage to the people that are born under August. Also, the stone will require you to invoke the various energies like self-control all the time. This will help you boost your strength and wisdom.

The August symbolism like most of the other month’s symbolism has a lot that they offer to you as a person. So, it is wise that you pay your attention to the many possibilities that it brings in your life. Moreover, you will also have the opportunity to grow your character in a positive direction when you learn the inner teachings of August Symbolism.

Also, it has the chance to synchronize with the influence of other symbolism. This means that other symbolism that associates with August can also influence your traits as a person. However, when they do this, it is usually in a positive way that can help you have a simple and harmonious life. Moreover, it will help you learn about strength and weakness to avoid unchecked failure in life.