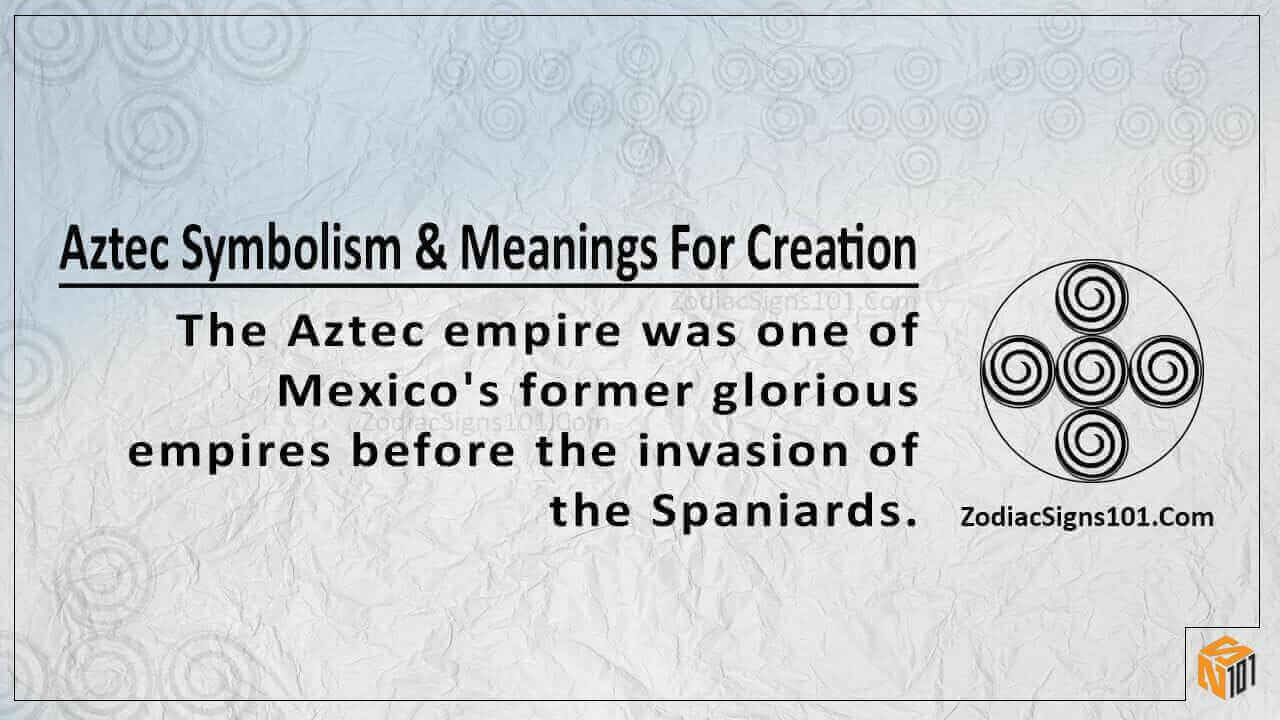 The Aztec symbols and meanings for creation were present a long time ago in the ancient world of the Aztecs. This is the current Mexican state. The symbols in question cover a lot of matters including religion, war, among many others. The Aztec empire was one of Mexico former glorious empire before the invasion of the Spaniards.

They had a rich history full of cultural meaning. Also, they had a writing system that would allow them to paint on the walls. Through this writing mechanism, they would note down names, titles on places like clothing or even buildings. This act was a way for them to identify with their gods on a social level.

Also, some of the symbols could predict one’s fortune. However, in most of the cases, the Aztecs would dwell much on the symbolism of war and religion. So, they would portray their gods as warriors in conflict. They would use symbols like animals and even humans. Also, they had a lot of animal symbolism to help them explain their ways of life.

Aztec symbols and meanings for creation: Some of the Symbols of the Aztecs

The Aztecs had so many symbols in their culture. Also, each of the logos had special bearing meanings to the people. Some of these symbols include the Atlatl. This was the spear to signify the prowess in the matter of war. Some believe that it had magical powers. There was also the symbol of the jaguar. The jaguar was the symbol of the Aztecs elite warriors.

Aztec Symbols: The Brief History of its Creation Story

The Aztecs had so many symbols that were revolving around their belief of creation. In which case, they had the notion that world that we are currently having was the 5th one. Over time the gods had destroyed the earth four times. However, each time they had given it a new leaf to start over. Some of these symbols include water for the first time. However, they used tigers for the second time to eat everyone, fiery rain on the 3rd and on the fourth time they used a storm.

The gods of the Aztec then mad the choice to continue giving life to humans. There was one who proudly took up the challenge to become the new sun. However, when the gods called him to jump into the fire that was to take him the sun, he backed out feeling afraid of the sun. Another person took the first person place and jumped into the light.

The first man was embarrassed and jumped into the fire following the second guy. This action created two separate suns. However, the gods took a rabbit and threw it after the first person to block some of his radiance. He then becomes the moon for the night. The sun after creation, could not move. So, the people made human sacrifices to make him move.

The symbolism of the Aztec Creation

The Aztec creation symbols have many meanings among the obvious one of creation. It also has five circles that form part of the logo. These circles have a sense of order, life, vitality, nature, and astrology. These are some of the symbols that will help one to understand the culture of the Aztec people.

Plus, they had an organized system to handle the matters of their symbols. Also, the Aztec people had a great interest in the issues of the stars. On the other hand, circles of the Aztec people had the belief that their circle symbol represented their gods. Some of these gods include Tezcatlipoca, Xipe Totec, Quetzalcoatl, and Huitzilopochtli.

However, at the center of the circle was the symbol of the god Ometeotl. You can also look at the circle symbol as the cycle of life. Other things that it can portray are the evil and good, rebirth or renewal and male and female energy.

Spiritual Influence of the Aztec Symbol

There is a strong sense of spiritualism when you look at the Aztec symbol. The symbol is one of the ways that would represent the various gods that they had. Also, it would teach them that they had the power to communicate with their gods. Moreover, the gods of the Aztec people where visible gods like the sun and the moon.

Moreover, they were at one point the witness of the creation of the sun and the moon. In the culture of the Aztec people, they had the belief that their god Ometeotl was the original creator. He is the god that his symbolism rests in the middle of the circle.

Also, they believe that he was genderless or both male and female. Moreover, he had the power of darkness and the of light. Also, he had the dominion over the will to be good and evil. In his lifetime, this god gave birth to four children who also became gods. These four deities too have a place on the symbol of Aztec but at the ages.

The Aztec had such a rich history although the blood of its people wrote it. They loved the notion of their gods and would sacrifice people to please them. It did not matter from which the family member would take the scarifies. Also, they had special warriors unit represented by the jaguar with magical powers.