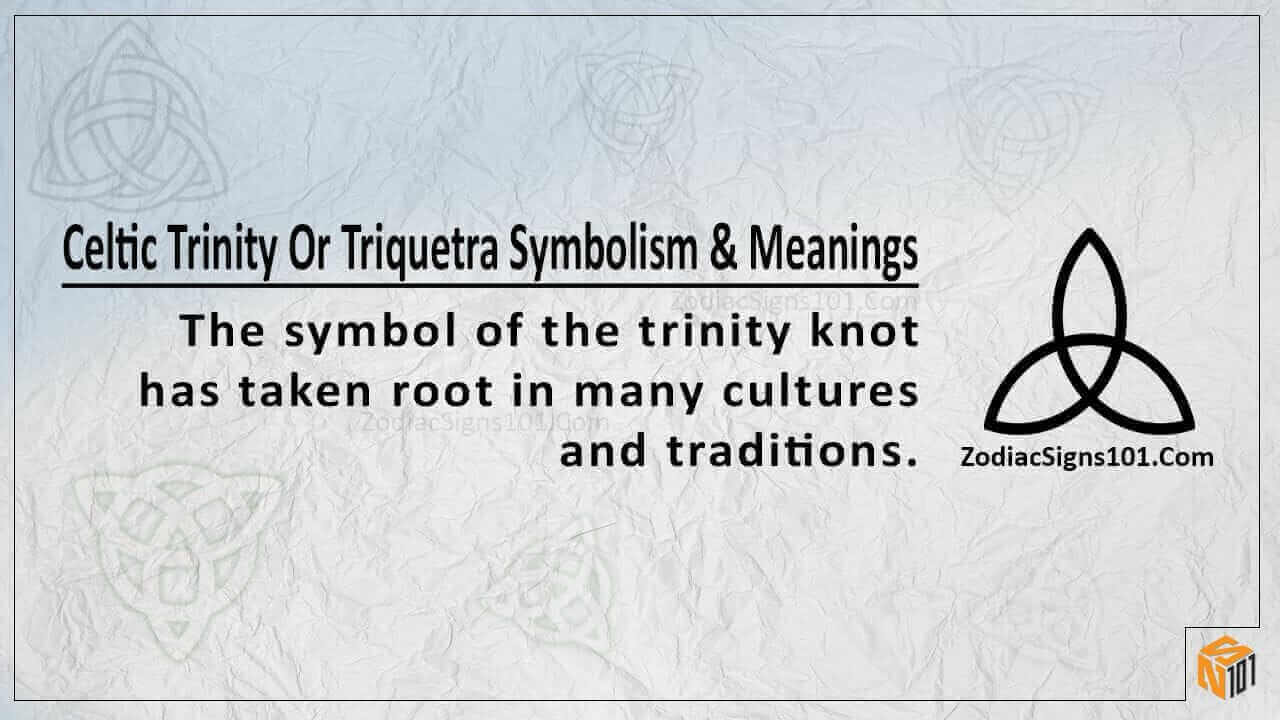 Celtic Triquetra Symbolism: Living Under the Influence of the Trinity Knot Symbol

Therefore, it means that it the Celtic triquetra signify a lot of different things to different people. Over time, the symbol of the trinity knot has taken root in many cultures and traditions. So, the meaning of the emblem differs in that culture but sometimes maintain the original purpose. The symbolic meaning of the triquetra is also the symbol of trifold of things that exist dependently from each other.

There is much symbolism of the Celtic triquetra like the mother, the father, and the son. Another more common one is the Father, the Son, and the Holy Spirit. However, sometimes it may get to represent something like love, honor and protect. So, the triquetra is also the symbol of the number 3. The number 3 is one of the sacred Celts numbers and has a lot of powerful symbolic meanings.

In most of the instances, the Celtic triquetra symbolism merges its meaning with that of the Holy Cross. There it has a lot of value in the Christian community as well. Moreover, the ways and the teachings of Christ made its way to the Celts through St. Patrick. The symbol of the meaning of the Trinity, therefore, began to lean on the side of the Father, the son, and the Holy Spirit. However, St. Patrick had used the symbol of Shamrock to teach the trilogy of heavenly beings.

However, in the early days before the arrival of the Christians, the druids and the pagan had a different meaning to this triquetra Symbol. They would by then use it to explain and describe, the natural phenomena’s that were surrounding them. They did not only associate the triquetra to the deities. For, the example they would equate it to mean the earth, air, and water. Or, they could expect to explain the family structure as the mother, the father and the child.

In their wisdom, the pagans and the druids also linked this symbol to the trifold of life, death, and rebirth. Something that they had such firm believes. In their way, they would even break the logo down to represent the symbol of a powerful goddess. The goddess Brigit was responsible for the metalwork, art, and healing.

The Other Symbolisms of the Celtic Triquetra

The Celts would consider it a great honor for one to have such skill in their community. Moreover, the only way to have such gifts is by the blessing of the Lord. The single another spiritual idea that the ancient Celts would put the triquetra into a task is by associating it with different worlds.

In its way, this symbol was the perfect way to explain to anyone the differences in the human realm, the spirit realm and the energies of the cosmos. The other domains are where the deities reside and most of the power while the physical world was ours to roam. However, the Celestial world is the home to all the unseen energies of the universe.

The Significance of the Celtic Trinity

As you may have taken note that the trinity symbol is also visible in most parts of the other traditions apart from the Celts. However, in the Celtic culture, there is the strong presence of it in the picture of motifs as Celtic Knots. It also appears in other several artworks that tell stories of the ancient Celtic world. In the old Celtic minds, the trinity symbol was the emblem of solar and the lunar phases. These two also had a higher symbolic meaning to the people of the ancient lands of Ireland.

The archaeologists have found the drawings of the symbols on some of their digs. Also, the Celtic trinity has a close association to the Great Mother Danu. She was the goddess responsible for the lunar phase of the moon. She would take multiple female forms throughout these phases. Furthermore, the Celts in their time applied the use of the triquetra symbol to mean the interconnection of three different things in life.

Then they would encapsulate it in a circle to bring in the meaning of infinity. The purpose of the infinite loop could be the meaning of the gods and goddesses love for humans. Or, it could symbolize their love for the entire human realm. This means that there is no interpretation of the symbolic meaning of the Triquetra that is off. All of them seem to point to the same things, interconnections, unity, and love. Also, there was the element of emotions that many still baffles even the strongest and the brightest of us today. They say the all the feelings, of power, love, and intellect are the same. That none of them is more important than the other and should be kept in check.

In life, the symbol of the Triquetra might as well be the most used symbol across the whole world. It seems to make appearances in all regions in all forms and has almost the same meaning. The meaning is to teach the people the purpose of staying unity while observing the interconnection of the three worlds. These are the world of the men, the celestial realm and the spiritual home of the gods.

It also dictates that people should be enlightened or seek the same to have a proper understanding of their lives on earth. Remember that the experience that you are currently living is not the last chapter. You will still have to transcend to the world of the spirits or then to the celestial world the back to earth. This is the cycle of rebirth for all the living things plants and animal alike. Therefore, we should appreciate their symbolism in our lives.