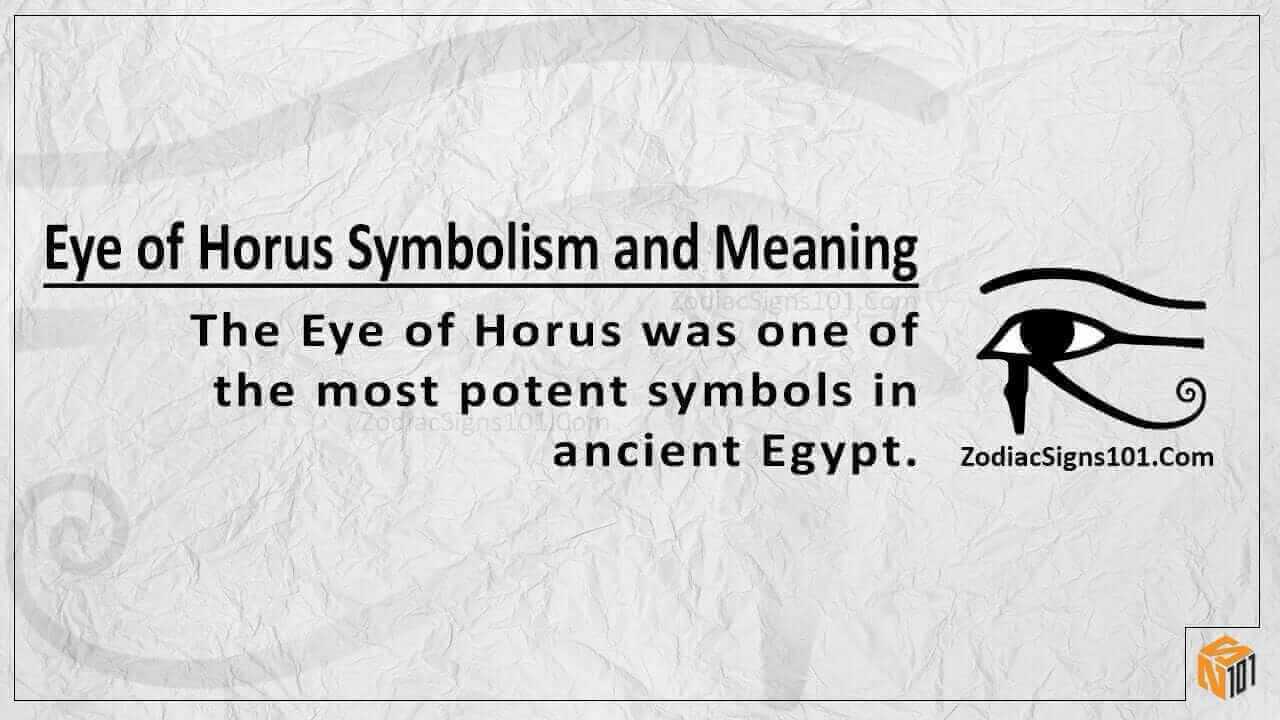 Eye of Horus Symbol: The Attributes and Significance it has in Your Life

A long time ago during the kings and queens of the ancient Egyptian lands, there were two brothers, Osiris and Set. According to the ancient lore’s both the brother were of royal descent but only Osiris would rise to be king. However, Set was not pleased with this arrangement. So, in his wisdom, he killed his brother Osiris. However, the wife of Osiris Isis conjured his husband from the dead temporarily, and they had a child by the Horus.

After the death of Osiris, he became the god of the underworld. So, Horus and his mother were alone in the world. Upon reaching maturity, Horus took up the quest of avenging his father. In one of the many battles that he fought against his uncle Set, Horus lost one of his eyes. Later, he got restored by Hathor or Thoth, who was the god of wisdom. The Egyptians believe that the Eye of Horus was restored to gain magical properties. Therefore, it had the power to protect and heal people.

The Eye of Horus has a lot of symbolic significance and meaning, especially to the people of Egypt. Many years ago, the Wedjat on its own was the representation of the moon. The eye of Horus has the duality effect of some of the symbols. For example, it has the symbolic meaning of both masculinity and femininity. On the other hand, it also bears the symbolism of light and dark too day and night. The tear that is flowing from the eye is the symbolism of the fight between Horus and Set.

However, its inner symbolic meaning is victory, aggression, and struggle. The simple Horus sacrificed one of his eyes so that he can rise to the stations of the gods. There is also a spiral on the eye of Horus. This symbolizes creativity that he used during his fight with Set. Also, it can signify growth and expansion. On the other hand, the spiral meaning can also be mystery, time, and wisdom that he attained after winning his fight with Set.

Each Part of the Eye of Horus

They believe that the right side of the Eye of Horus signifies the sense of smell. On the other hand, eyebrow represents the symbolism of thought. However, the right side gives us the representation of one hearing. This is because it is pointing towards an ear and it looks like a musical instrument. The pupil is, therefore, the symbol for sight. There is a curved tail on the eye of Horus that signify a sprout from the grain. The teardrops hence give the symbolism of the need for touch.

The Symbolism of the Eye of Horus in the Contemporary Society

The use and significance of the Eye of Horus are still viable in today’s society despite the Egyptian civilization coming to an end. In most parts of the world, they use the eye as a decoration sign or even as a tattoo. However, they don’t necessarily use it mean anything significant. So, there some that still believes in its symbolism. However, some fishermen still use it as a sign of protection when they are out at sea. This symbol is still in use mostly in the Mediterranean countries.

There are those that use the symbol of the eye of Horus on jewelry to offer protection to the people that they love. So, they can print on clothing or even shape it on belt buckles. On the other hand, the occultists and conspiracy theorist and hackers have taken a liking to the eye of Horus. In this sector, the eye not only serves to protect but symbolizes their ability to see through everything and anyone.

Dream Meaning of the Eye of Horus

There are some of us that have the lack of dreaming about the eye of Horus. Moreover, the eye usually presents itself in many forms. Therefore, it will have different meanings that are relevant to us as per our visions. However, you need to be keen on the details of the dreams as it presents itself to you. On the other hand, you will also know how what to expect so that you don’t over-rely on their meaning. Also, you may need to read and consult the purpose of the Eye of Hours before you can apply it to your specific situation.

For example, you may dream of the eye of Horus as being upside down. This may be a warning that the thing that you are about to undertake in life doesn’t have protection. Therefore, you may want to avoid such deals. Or you will have to investigate in the matter thoroughly before investing your resource into it. Also, you may want to make sure that everything in your life is ok before you accept such significant challenges.

The eye of Horus Symbol has a lot of lessons that are relevant even to the people of this society. Therefore, you may need to work hard to accept their inner meanings and apply them to your life. Remember. Most of these, like the Eye of Horus, has only real purposes. Plus, it is there to serve as guidance to the people that want to learn from it.