Eye Symbolism: What does the Eye Symbol Represent?

All the parts of the body are symbolic in a way. The eyes, however, top the list of the most symbolic organs of the body. Eye symbolism is something that exists in different countries all over the world. According to the Eye Symbolism meaning, the eyes are the window to the soul since they tell the truth and they lead us to spiritual enlightenment.

The eye symbol appears in places such as the temple, shrines, and churches. It has also been incorporated into money. This has been the case since ancient times. The eyes represent visions and a gateway into people’s souls. Eyes associate with characteristics such as truth, light, intelligence, and morality.

The eyes are used to reflect the aspect of honesty in human beings. Culture has it looking someone straight in the eye determines their trustworthiness. Do covered eyes mean anything? Yes, according to some cultures covering of the eyes symbolizes deceit or half-truths. However, in other cultures, the covering of eyes is a sign of respect, submission, and modesty. For example, women in most of the Middle East cover their eyes as a sign of submission and modesty. In most cultures, the eyes dictate authority.

Eye symbolism enables us to read the eyes easily via the eye color. The color of the eye is something that develops in genetics. It mostly signifies the amount of melanin present in one’s eyes. Below are some eye colors and the personalities they reflect.

This is the most popular eye color in the world. People who possess this eye color are kind, caring and sensitive to other people’s feelings. Even when one appears to be tough, the color of one’s eyes betrays them. This color also signifies humility and confidence. People who possess this color of eyes are good partners or spouses in love relationships. They love their better halves unconditionally.

This is the second popular eye color in the world. The people who possess this color are said to have come from one ancestor. They possess great stamina. These people are capable of withstanding any amount of pain.

Few people in the world possess this eye color. People who possess this color are compassionate, mysterious and lovers of adventure. They get angry easily. Their anger, however, is calmed easily as well. Such people do well in areas where many people have failed.

Hazel is a color that signifies strength, intuition, sensitivity, hard work and determination. The people who possess this eye color do not give up easily. They are fighters for life and do things at the right time.

People who possess this eye color are trustworthy and honest. Anyone can trust them with their secrets due to their secretive nature. They come out as responsible and caring as well.

The eyes mean different things in different cultures. However, in all cultures eyes are connected to our souls. They give insight in a way that cannot be understood fully.

The Eye of Providence

Do eyes have a symbolic meaning in the Bible? This is the eye symbol in Christianity. The Eye of Providence is also known as the All Seeing Eye of God. It means that God’s Eye is watching over the actions of human beings. In Europe’s history, the All-Seeing Eye was surrounded by a triangle. The triangle represented the Trinity, that is, God the Father, God the Son and God the Holy Spirit. This eye, in other words, represents the omnipresent nature of God in our lives as human beings (Proverbs 15: 3).

The Eye of Horus

The Eye of Horus originates from Egypt. This eye in Egyptian culture is a symbol of protection and life everlasting. Egyptians also refer to it as the Eye of Ra. Ra was an Egyptian sun god. It also signifies royal authority and wealth and good health. 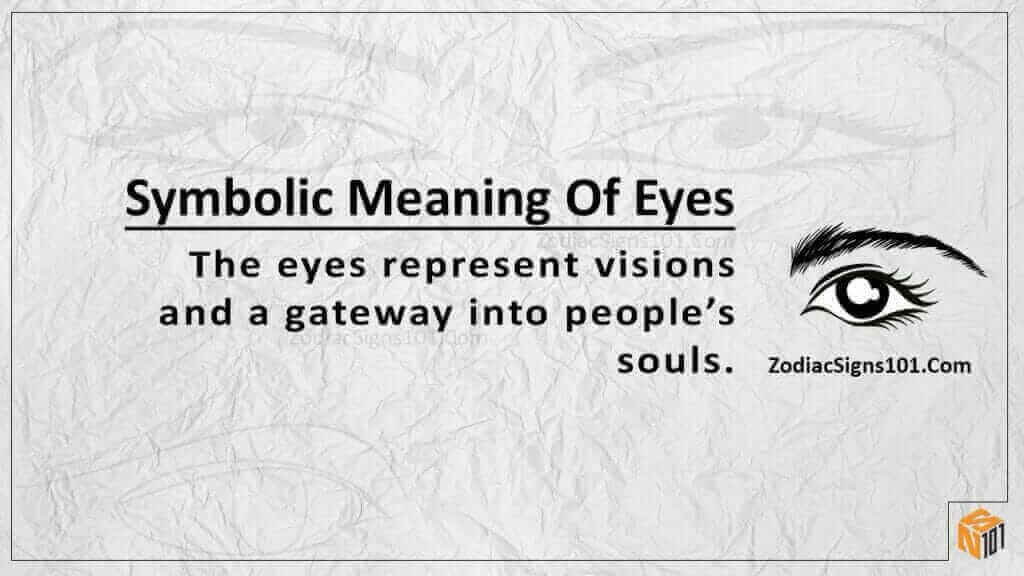 Hindus are the ones who subscribe to the traits of the Third Eye. It is associated with the Brow Chakra. It is present on the forehead of Shiva. The symbol signifies an inner eye that is capable of seeing all things in the cosmic setting. People also refer to this eye as the intuitive eye or the eyes of the soul.

While dreaming the eyes direct us. They are windows to our souls; hence they open us up to new dimensions. Dreams put you into a new path leading you to your destiny. Through dreams, the eyes also guide you to reach people who need your help. However, we cannot interpret dreams on our own hence we need help to make clear our visions.  Dreamy eyes can also guide you into seeing that which other people cannot see.

Eye Symbolism is present in all cultures in the world. They signify an opening to our souls. With our eyes, we grasp a better view of the things happening around us. Eyes give us clarity and perspective. They also signify intelligence, judgment, and authority. Perception and awareness also manifest via eye symbolism. The symbolic meaning of the eyes is what you make of it as an individual.