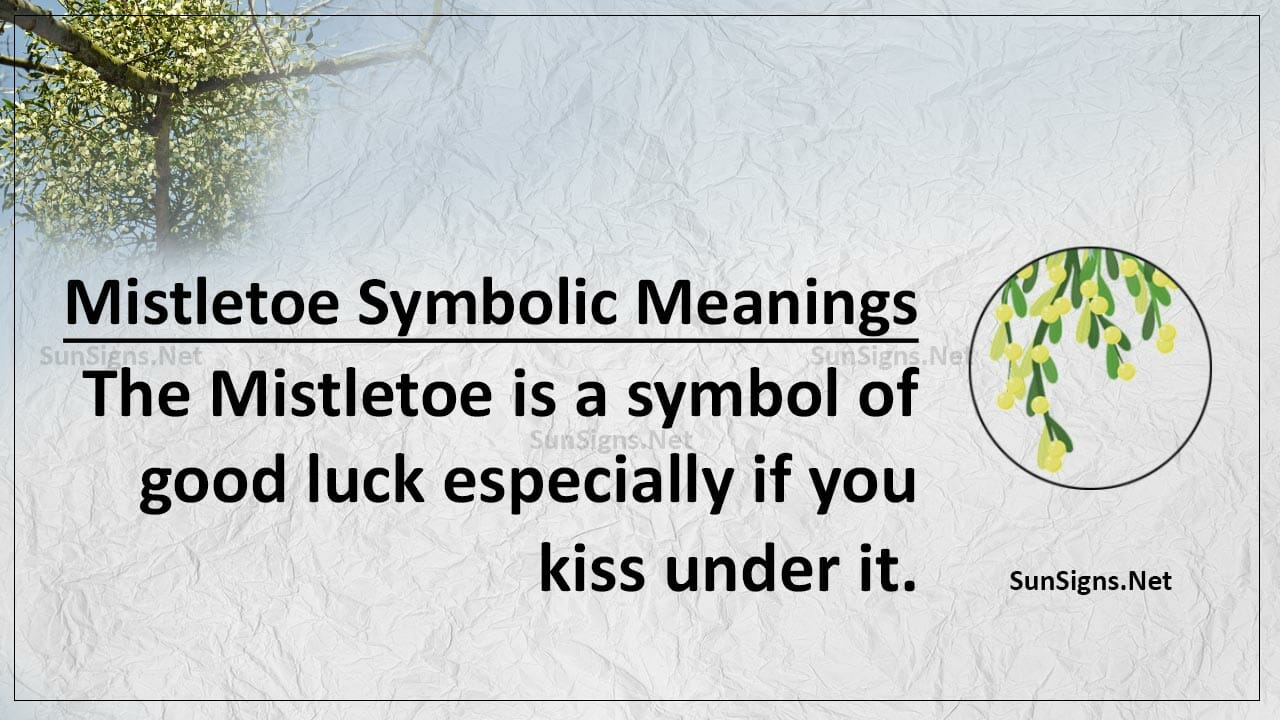 Mistletoe Meaning: The History of the Symbol of Romance and Luck

The concept of mistletoe meaning mostly covers the symbolism of Christmas time. However, it has other meanings as well. Therefore, most people use it during the traditional Christmas times fall decorations. If you happen to be under the Mistletoe during this period, you may be required to give a kiss to someone. This concept also brings a little Romance or romantic ideas to the idea of the Mistletoe.

The Inner interpretation of the Mistletoe

The meaning of mistletoe is one of the oldest symbolisms in the world. So, it can capture the essence of power, peace, healing, Rebirth, protection, friendship, immortality, unification, life, and magic. All of these are some of the Inner meanings like the Mistletoe has.

However, if you want to get the other meanings of the Mistletoe, you may want to look at its origin. The Mistletoe has a background from the ancient you. Therefore, the only people that know about it that much are the Celtic druids. History remembers the Celtic druids as a peaceful people that were loving to nature and their surroundings. Also, one can tell most of the people back then will rely on them to be teachers, peacemakers, and judges. This is because they had a unique relationship with nature.

Moreover, they had psychic abilities that interpreted into something like Juju. On the other hand, the druids knew that the Mistletoe had more of a symbiotic relationship with the deciduous trees. So, according to the interpretations, when the deciduous tree loses its leaves, it symbolizes death. However, in most cases, you’ll find the Mistletoe evergreen in nature still clinging to the tree.

It expresses the meaning of life after death. This is one of the concepts that capture the essence of Rebirth to the druids. Alternatively, mistletoe is also a source of nourishment to most of the wildlife, especially birds. The birds would sometimes eat the Mistletoe berries. Through this, the birds are helping in spreading the seeds of the Mistletoe. Therefore, ensuring continuity in its life. Also, the Mistletoe is a source of shelter to some of these wild animals.

The Symbolic Meaning of Mistletoe in Regards to Kissing

As per the ancient legends of the druids, the oak is masculine while the Mistletoe is feminine. This, therefore, makes them one of the perfect couples in theory. Moreover, this concept the reasons why Mistletoe is being used to bless new unions across the world.  This means it also has the power to protect new marriages. Therefore, this means that if you undertake the process of marriage.

Or, by befriending someone under the presence of mistletoe, you’re blessed. This is one of the reasons why kissing under the Mistletoe has some magical elements. In short, the meaning of the Mistletoe and the oak symbolizes Union. This is why the Celts would use the symbol of smooches to seal deals. It also expresses the purpose of making peace and maintaining harmony.

The Symbolic Meaning of the Mistletoe in the Norse Culture

There is a legend in the Norse culture that implicates the symbolism of the Mistletoe to that of the god of light. At some point in his life, the son of Odin got impaled by a spear. As a result of the attack, the god of light was taken to the underworld to be resurrected. Both Frigga and Odin were unable to bear the death of their son.

The Mistletoe as a Christmas Decoration

Moreover, if you do not kiss under the Mistletoe, you’ll be found by bad luck. This is why the Mistletoe has become such a symbol of romance and success in the contemporary world. However, some people have gone as far as carrying the Mistletoe above their heads during this festive Seasons. By doing so, they will ensure that at least they get someone to kiss them during Christmas.

The concept of mistletoe has a powerful combination or symbolic meanings. These symbolic meanings have been around can develop over time through many cultures and people.  Also. It can borrow and rely on the meaning of other symbols like Christmas to help define its purpose.

On the other hand, it has a close binding relationship with the oak tree and deciduous tree. This, in turn, helps the mistletoe to have a symbiotic symbolic meaning with other symbols as well. So, through all of these cultures, you are bound to realize that the purpose of the mistletoe.

Also, it then captures things like love, peace, healing, protection, rebirth, and immortality. All of these traits are the precise definition that the symbol of mistletoe has gained over the years. Although as time goes on, there may be other meanings that may come up due to the ever-changing societal standards.