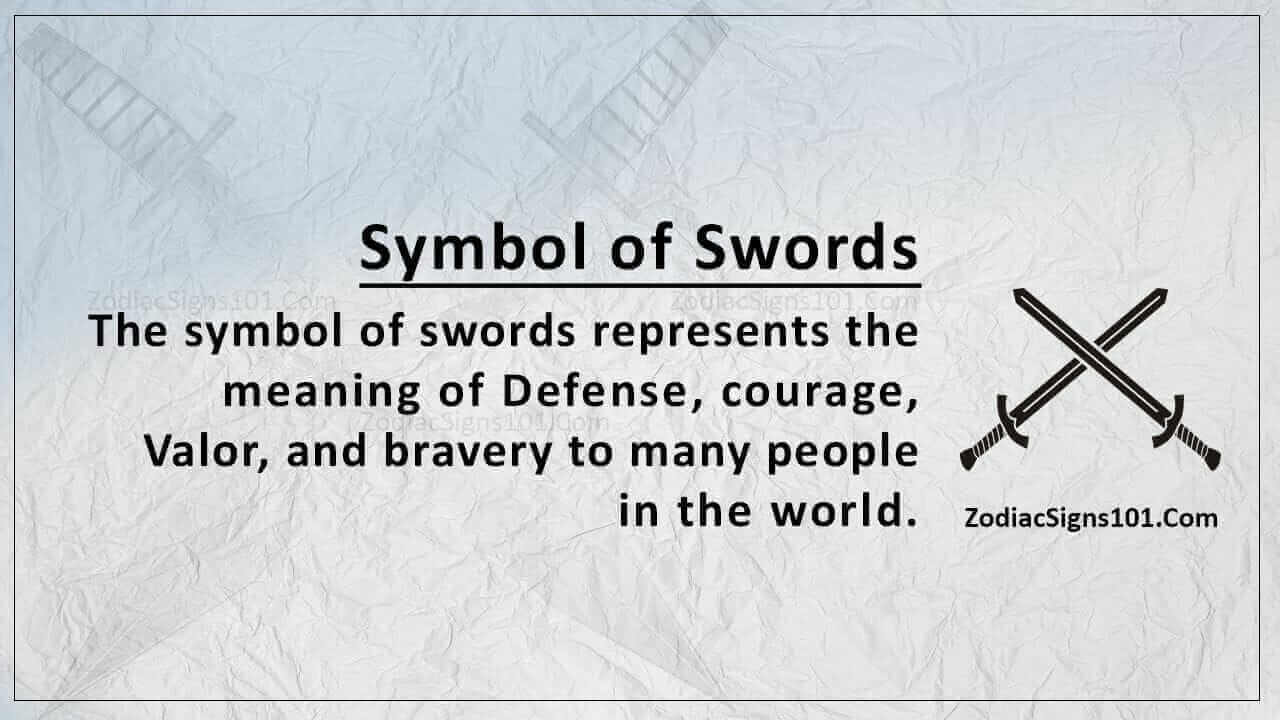 Symbol of Swords: Using the Power of its Spirit to Guide Your Life

Since the ancient days, the symbol of swords represents the meaning of Defense, courage, Valor, and bravery to many people in the world. Also, this means that the sword meaning has been around since time immemorial. The people that use them always have a point to prove. However, if you carefully look at the purpose of the sword symbol, you will realize that it has a deeper meaning than that of protection and weaponry. The beliefs of the alchemists portray the sword was a symbol of purification. This is because the sharp blades were used back then to cut through anything.

Moreover, the cuts that are made by a sword are usually clean and specific. The alchemists believed that the sword could be used to cut anything, including the human body, even their souls. There are many types of swords in the world, each with specific and symbolic meaning attached to them. For example, there is one that is always double-edged. The double-edged sword has a spiritual essence that represents the meaning of duality. This constitutes the meaning of death and the meaning of life.

Also, these words have a spiritual sense that incorporates the four elements of the Earth. These elements are water, Earth, air, and Fire. They are beliefs that the birth sword has a special meaning towards creation. On its own, the symbol of the birth sword represents the meaning of Unity and balance in the world. However, the other general purposes of this sword incorporate attributes like action and strength. On the other hand, they can also have characteristics like aggression, decision making, Justice, and leadership.

The Symbolic Meaning of the Sword in Different Cultures

The sword is one of the common elements that appear in most of the cultures across the globe. Therefore, you should know what it means to all the people. Here are some of the symbolic meaning of the sword in various cultures.

The Symbolic Meaning of the Sword in the Christian Culture

According to the traditions of the Christians, they believe that the sword stands for the meaning of Justice, protection, and righteousness. The Christians always depict the Archangel Michael, who is also the messenger of God to be having a sword. The symbol of the sword that Archangel Michael has represents the meaning of enforcement. Angel Michael is the one that God usually sends to enforce his will on humanity. There are also some display pictures of the archangel Michael having a flaming sword at front gates the Garden of Eden. This means that the archangel Michael is the Protector of all good things in the world. Moreover, the only people who can pass by him are the ones that have been chosen by God. Also, this means that you have to be Pure of heart to enter heaven or even see the Garden of Eden again.

The Symbolism of a Sword in the African Setting

When you’re looking at the meaning of the sword in the African setting, you should have an open mind to the various cultural purposes. Some of the cultures include Central Africa, especially in the Congo and that of Egypt. Moreover, these are some of the ancient Civilizations that African had. The meaning of a sword in Central Africa takes a different direction to most. This is because they represent the meaning of transition because they are sharp. Some of the communities in Africa also believe that the use of this sword describes the cycle between life and death.

Representing the Meaning of a Sword in the Celtic Culture

The Celts are one of the oldest communities in the world; therefore, they had the opportunity to have a sword earlier than most. This also means that they have a lot of significant symbolic meaning towards the symbol of a sword. Swords would be used for ritual purposes; hence, it has spiritual significance. Within the Celtic culture, they were specialists by the name the druids that would use the sword to perform this ritual.

On the other hand, the Celtic was also a community of Warriors that believed in defending and conquering the other villages. In this setting, the sword bears the symbol of protection and that of power. As per the history of the Celtic Warriors, the sword was also a proof of personal sacrifice. Some of them would have such large swords to intimidate their enemies. On the Celtic swords, you’ll find some decorations that mark the bravery of the Warrior.

Symbol of Swords: Did you know that a sword also had dream meanings?

A sword like most other symbols as specific visual meanings that will present themselves to you. in case this happens, you will need to know how to interpret the meaning. By doing this, you will avoid some mishaps that can occur to you. The best way to understand the definition of a dream is by inferring to the symbolic meaning of the item. For example, a person can have an idea about an unsheathed sword. This has a lot of different interpretations. However, you should interpret that according to the situation you are facing in real life.

This can also have the meaning that there is trouble ahead, and you should get ready to face it. They are those too that have dreams about a woman pulling a sword out of water. This indicates that there is a possibility of you having problems in the future. If by any chance you are in doubt about the meaning that you’ve come up with, then you can meditate on the matter. You will have to channel the Spirit of the sword to help you interpret your situation correctly.

Interpreting the meaning of this word is one of the most extensive Fields that you can tackle, therefore, should be careful. Moreover, you should ensure that you capture the meaning of the sword in different settings. This way, you will ensure that you get the proper definition of a sword. Moreover, the purpose of the sword is so broad that it even touches on spiritual meanings. You should also consider doing a comparative analysis of similar objects from different cultures. This way, you will get to know the true symbolic meaning of the sword.