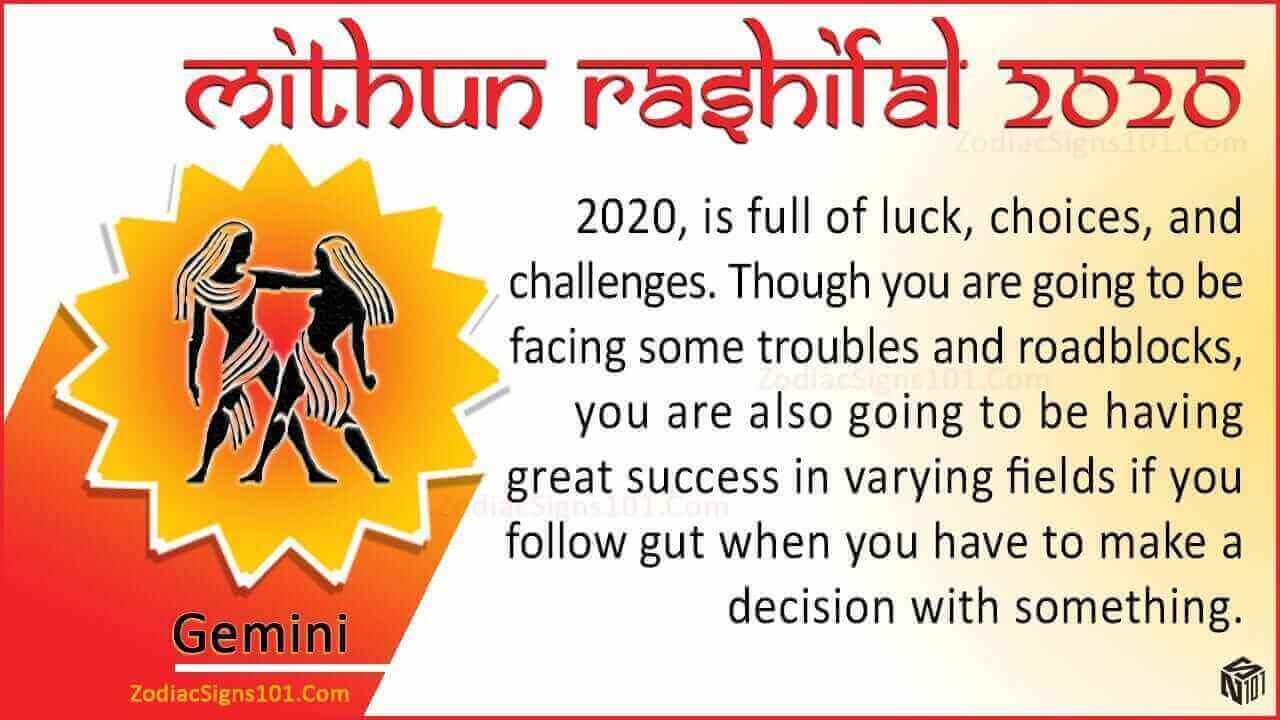 The Mithun 2020 horoscope predicts a challenging year ahead. It is full of luck, choices, and challenges. Though you are going to be facing some troubles and roadblocks, you are also going to be having great success in varying fields. If you follow gut when you have to make a decision with something, things should go well.

According to the Mithun 2020 horoscope, you need to watch your health. Also, watch the health of their families closer than you usually would.

At the start of the year, you are not going to have a lot to worry about. Your personal health is likely to take a bit of a drop come April and stay worse through July. However, your own health is going to be stronger from July to halfway through November.

Eat less meat and do more yoga or other forms of exercise. You can keep your mental health up and stronger by keeping your physical health strong and vice versa. Even just eating healthier foods is going to have a strong effect on your immune system and how often you get ill.

The Mithun 2020 horoscope predicts luck in love. If there have times where you get a little tired from the same person, the same favorite foods, and so on, you do not have to worry about getting those feelings at all in the coming year of 2020. The first month of the year all the way to mid-May is going to be a very joyous time for you and your partner.

The middle of October to the middle of November is going to be bringing some turbulence because you might have a harder time balancing work and home. Just get a healthy balance going and the turbulence should be cleared out before the chance or time to become a real problem. If you are planning a wedding, it would be in your best favor to have it in August or December.  If you are a single Mithun, then do not expect a long lasting relationship, but rather a few short-term ones instead.

As far as your family is concerned, things are going to be fairly easy sailing. There is not a lot of foreseen drama, but there is going to be a little tension and disagreements after July. From the middle of March through May, you can expect to gain some real estate. During the months of August, April, and November, you should keep closer tabs on your mother’s health.

If you have been thinking about getting a new house or even just making changes to your current one, then wait until September to do them. If you have kids, they are going to be enjoying the fact that you are around.

2020, for the most part, should be about getting closer with your family. Get closer to relatives that you only talk to on the major holidays, spend time teaching your kids about the basics of different things and topics, try doing more chores or other things that need to get done around the house with your partner.

The speed of your career is going to be going at about the same pace as last year. However, you can speed it up if you want to by putting a little more effort into your personal work. Come January through March you might be facing some problems but is not going to be without gain. While you are struggling along your way, there is a pretty good chance of you meeting a new business partner that can help you with the work.

Once March passes, you are going to be having easier sailing until around November going half way through December. During the more difficult times of the year, you should not even consider starting any form of a new venture. Your partner or spouse is going to be there for you in just about any way you need them when it comes to your career choices.

May and December are also going to be amazing months for you financially. September is going to bring some more trouble, though. If you want to get a little side project going to make some extra money, it would not be unwise. Just make sure that the side project has nothing to do with the lottery, the stock market, or gambling. Those methods are going to have the reverse effect of what you want.

According to the Mithun 2020 horoscope, the roadblocks, for the most part, are going to be in traveling and your health with a couple of curve balls tossed in as well. Otherwise, your income is going to be improving. The relations you have with your family are likely to become stronger. All in all, 2020 is looking like it is going to be a good year.