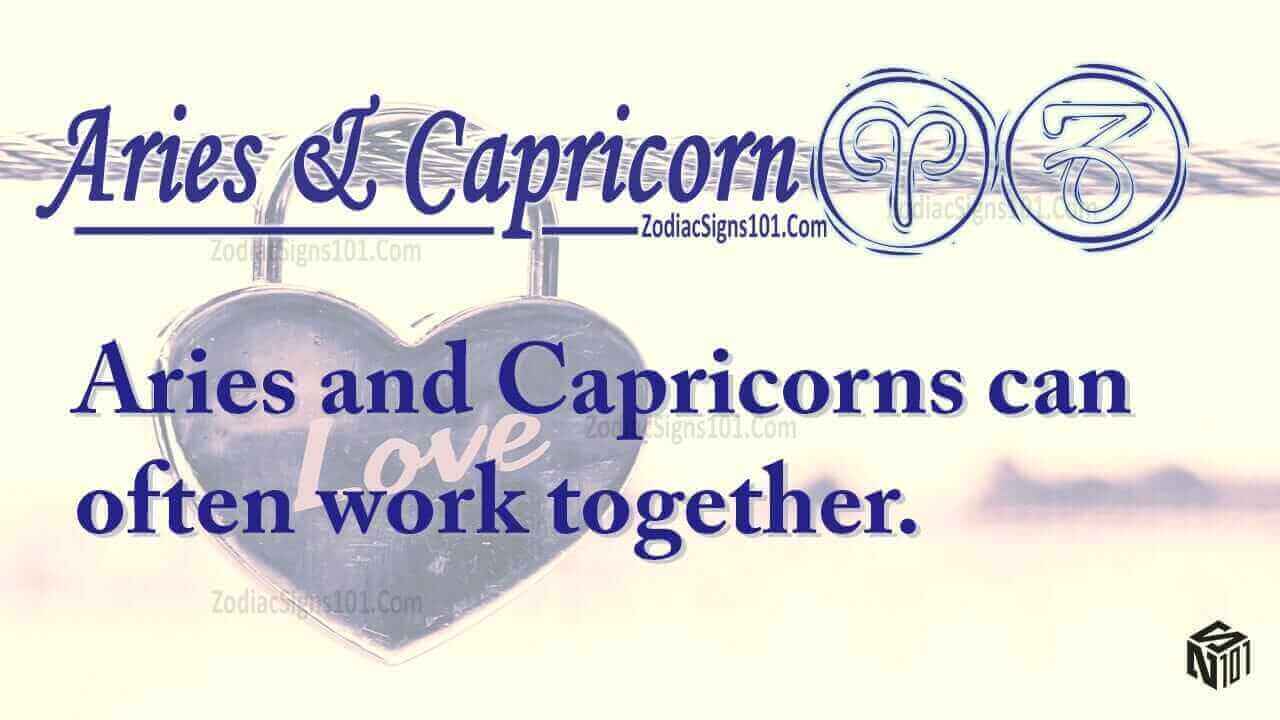 What does an Aries/Capricorn relationship look like in terms of compatibility?  Will they be able to connect on all levels or will they struggle to find any common ground? Find out here.

Aries (March 21 – April 20) is outgoing and confident in terms of their personality.  This zodiac sign is ruled by Mars, named after the god of war in Roman mythology.  Their character is impulsive and spontaneous as well as adventurous and enthusiastic.  Nothing seems to keep them from trying new things and exploring new adventures.  Their independence is held fast so that no one holds them back.  People admire these traits and will follow Aries, who’s a natural leader.  Aries loves attention and loves working with others who help achieve their goals.

Capricorn (December 23 to January 20), ruled by the planet Saturn, prefers to work on their own.  Even though they’re a good friend who’s supportive of their friends’ needs and feelings, Capricorn has found that they work faster and more efficiently when they’re not held back by others.  Group work is one of the last things they want to do, and if they must, they would rather be the leader to ensure it goes well.  Giving up or failing is not an option for Capricorn.  They work hard to achieve their goals even if it affects their social life.  When they have a problem, they would instead solve it themselves than burden their friends.  In spite of their desire to do everything on their own, they want someone who loves them for who they are and the differences they have compared to others.

Aries and Capricorn are very different in personalities, so compatibility is possible though not effortless.  Aries follows their instincts and impulses while Capricorn meticulously thinks things through to avoid risks.  Both of them share a focus to be successful in their careers and their goals, but their approach to reach those targets are poles apart.  If they happen to work together on the same project, they’ll disagree on the method and cause arguments unless they’re both willing to compromise because they’re both stubborn.  Compromise will be one of the most powerful tools in an Aries/Capricorn relationship.

Positive Attributes in an Aries/Capricorn Relationship

When looking at the characteristics of Aries and Capricorn, it may be challenging to see how they’ll ever find agreement when they’re so passionate and secure in their position.  Capricorn wants to help, and they have the knowledge to advise Aries so that Aries can come up with a solid decision on their own.  If Capricorn tries to take charge in the decision-making process, it may end up backfiring instead of moving ahead.  Aries loves knowing that they can positively influence something and Capricorn can help make it happen successfully.

Aries already has a stage presence and does well in front of a group.  Capricorn doesn’t mind being in charge of the operation itself.  This is good in business and in related projects that they must do together.  Sometimes when Aries works impulsively, the risks aren’t thoroughly thought through.  Capricorn knows how to look at the details and avoid pitfalls.  Together they can use their strengths to achieve what they wish.  However, if they don’t share the same goal, they need to agree with what the other has to do to avoid conflict.

Capricorn won’t rush into a sexual relationship even though Aries wants to show their passion for their partner.  They’ll take it slow as Capricorn prefers it simple.  Aries will have no problem leading and will give Capricorn plenty of opportunities to let loose and explore sex more and more, much to the satisfaction of each other.

Negative Attributes in an Aries/Capricorn Relationship

Aries is impulsive, and Capricorn is steady.  This is the start of the conflicts in their relationship.  Aries will find Capricorn dull and uninteresting because they won’t want to try new things all the time.  Capricorn may find Aries immature and unreasonable because they won’t settle for traditional ways that don’t rock any boats.  They’re both set in their opinions, and their assumptions can lead to misunderstandings and arguments.  Both have to compromise and be open to the other’s point of view.  This may mean that Aries needs to slow down and take it one step at a time.  For Capricorn, they need to be willing to try new things with the possibility that they may enjoy a different approach or style.

Aries wants attention, but they may feel disrespected when all of their ideas are shot down by the constant “no” from Capricorn, who finds them too risky or near impossible in their mind.  It may start sounding like a broken record if Aries’ thoughts and ideas aren’t even considered because they don’t match with Capricorn’s ideas.

Aries also has the potential to say things that are insensitive to Capricorn.  Aries is known for speaking their mind.  Even if it’s true, it may come off as rude and uncalled for.  A joke to Aries may come across as insulting to Capricorn.  If Aries wants to stay in a long-term relationship with Capricorn, they need to learn about other people’s feelings more and be aware of the adverse effects that can eventually destroy love and friendship.

When it comes to compatibility, these two signs have to learn the art of compromise.  There’ll be plenty of times where they don’t see eye to eye.  Their stubbornness may close their ears and minds when they should be open to new ideas and other points of view.  Capricorn can learn to take more risks while Aries works on heeding the advice of others.  Patience with others isn’t a strong suit for either of them, but it’ll make a difference in their relationship.  Rather than being opponents in love and marriage, they need to find a place in which they can work out their differences.  Aries may have to allow Capricorn the time to build the stamina to take on some of these adventures.  Likewise, Capricorn needs to give Aries the chance to develop the diligence to think through ideas on their own or consult with an open mind.  This couple can support each other when they accept constructive feedback and complement each other’s strengths.  They can enjoy something new or revisit something they enjoyed before.  More than anything, it’s vital that these two avoid arguments because many times it’s more trivial than critical.  Compromise is key to an Aries/Capricorn love compatibility.