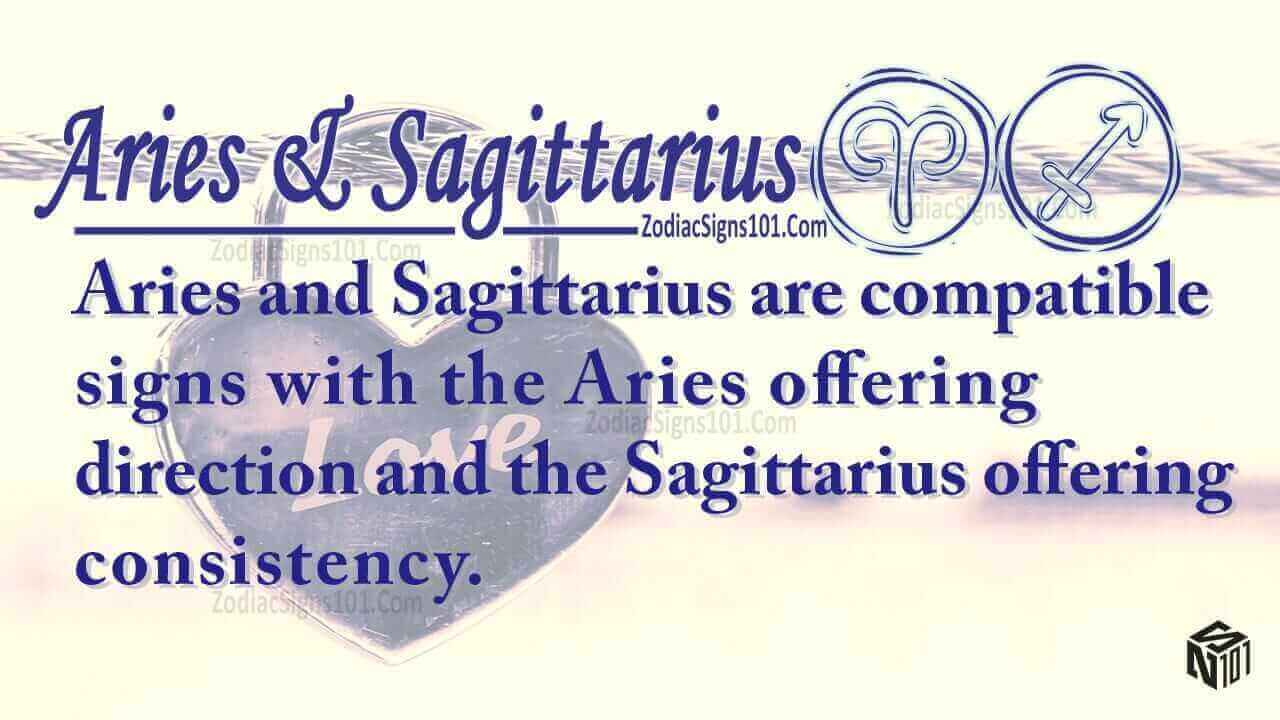 What do these two zodiac signs mean concerning their compatibility with one another?  Will they be able to connect on all levels or will they struggle to find any common ground? Here, we take a look at the many different factors in an Aries/Sagittarius relationship.

Aries (March 21 – April 20) is a zodiac sign ruled by the planet Mars, which is named after the Roman god of war, demonstrating courage and leadership.  Those born under this sign are enthusiastic, adventurous, and independent.  They love to try new things and be with people.  At the same time, people want to be around them and follow their strong personalities.  Aries is quick to come up with new ideas and just as ready to act on them.  They have optimistic goals and involve themselves in the process until either the task is complete or they lose interest.

Sagittarius (November 23 – December 22) is ruled by the planet Jupiter.  Like Aries, Sagittarius has a lust for adventure and a tendency to get bored before moving on to more exciting things.  They crave excitement and often have friends who’ll join them on their next experience.  They’re more easy-going in temperament which makes them more likeable in a social setting.  A Sagittarius may often be late for many things, but it’s hard for others to hold a grudge with someone like them.  Sagittarius is also known as the bachelor sign.  They may be the most difficult to commit to a long-term relationship.

When Aries is ready for excitement or adventure, Sagittarius will be right by them and keep pace.  This is also true when exploring sex with each other.   They’ll take risks though both of them are never known for considering the dangers or negative impacts their actions may create.  Both are independent and have a need to do things on their own, which is ideal in most cases.  While both can be blunt, Sagittarius is more likely to hurt Aries’ feelings.  However, they’re both capable of working things through and won’t resent the other.  They can respect each other through their understanding.

Positive Attributes in an Aries/Sagittarius Relationship

Both Aries and Sagittarius hold nothing back.  This is great as they keep the lines of communication open and don’t hold on to anything that will explode when push comes to shove.  When they talk about anything and everything, especially what’s on their mind, they’re able to share both the positives and negatives in their lives.  This could be gossip, friendly banter, or in-depth discussions about their next goal in life.  Not only is this good for their relationship, but it also allows them to strengthen their connection to something more than chemistry and desire.

Along with open communication, they’re both optimistic and have little to say that would bring them down.  They focus on the positive, like the sunny forecast tomorrow even though it’s rainy today.  They can deal with the bumps on the road of life and can cope with those challenges.  Neither sign ignores those challenges, but they do learn from them and keep a positive attitude in the process.  By both being optimistic, they can take on those challenges together.

Some of those challenges may deal with a shared sense of adventure to try something new.  They bounce off somewhat crazy ideas and see how far they can handle the risk.  Aries and Sagittarius don’t focus on the adverse outcome, but the positive results and the thrill of taking on the task.  Maybe both like to snowboard, but have they tried jumping out of a helicopter to do it?  If they haven’t, Aries will want to try it, and Sagittarius is all in.  Both of them are born under the element of fire.

For them, they’re always on the go or thinking about their next adventure while they’re engaged in the present one.  They live life to the full and they complement each other when they live it.  This is also true in their work life.  Both signs work hard on what they love to do and know that they have to make good money to live the lifestyle they want for themselves.  Their commitment to their jobs may make them workaholics, but this trait is something they can both relate to.

The sex life of an Aries/Sagittarius couple is never dull.  If there’s a position that’s exciting, they have either tried it or have it on their bucket list to try.  Their chemistry is also explosive as they want to be as close as possible as soon as possible.  Eventually they’ll take pleasure in slow and sensual foreplay and lovemaking, but first, they may need to get their fast-and-furious desire out of their system.  That is if it ever gets out of their system.

Negative Attributes in an Aries/Sagittarius Relationship

When Aries falls in love, they’re willing to commit.  Sagittarius, on the other hand, is not as interested in marriage or family as Aries is.  Aries may try to push to the point of being clingy, but that may push away Sagittarius.  Although Aries may not be patient in most circumstances, in the case of a long-term relationship, they may have to wait for Sagittarius to make the decision when they’re ready for marriage.

One reason that a long-term commitment like marriage is daunting to these signs is that it can become dull or boring.  Since both Aries and Sagittarius can lose interest quickly, one can see the possibility in their future.  However, this couple is more likely not to be bored with each other because they’re both willing to continue trying new things and trying them together.  Neither of them will hold the other back, and both of them will keep that list of new adventures, sexual positions, and topics of conversation growing.

When it comes to compatibility, these two signs have a strong connection because of their similarities.  Aries will still have their leadership role in making many of the decisions while Sagittarius will remain easy-going and excited for each endeavour and possibility.  Both of them thrive on discovery and living for the moment.  They’ll also motivate each other and stay optimistic in spite of the challenges ahead of them.  There’s little chance of getting bored with the other because, for them, each day is a new day to indulge and explore.  As long as they let their partner be themselves, Aries and Sagittarius will be able to enjoy a long-term relationship.