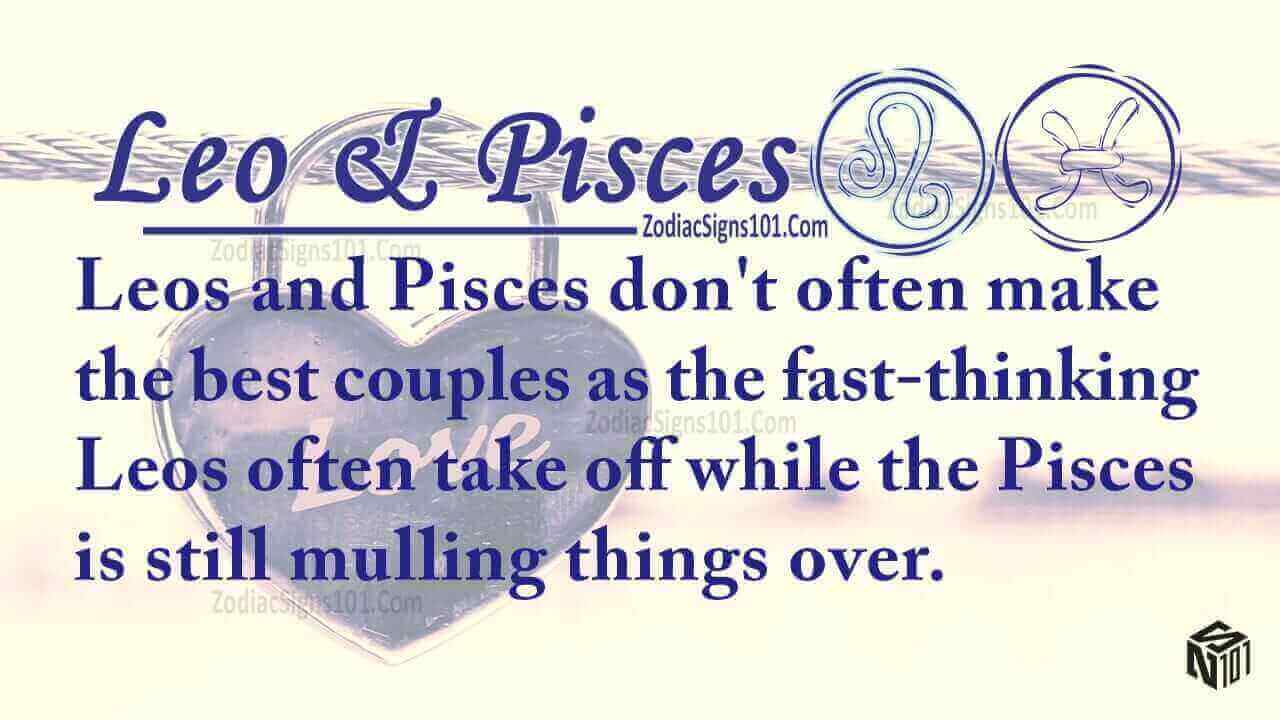 The relationship between Leo and Pisces is one where opposites attract. This article will look at the ins and outs, highs and lows of Leo Pisces love compatibility.

Leo (July 23 – August 21) is represented by the lion and ruled by the sun.  They’re energetic and love to be in charge of every aspect of their life.  To reach their goals, they strive to be the best and go as far as they can.  They’re so confident in their abilities that they’re firm believers in their ideas and plans.  When in doubt, they’ll look to their friends for a morale boost to get them back on track.  As much as they love being around other people, their independence is essential to them.  If they aren’t in charge, they’d rather be successful on their own whether it’s work, leisure, or adventure.

No other sign is as spiritual or as emotional as Pisces (February 19 – March 20).  These daydreamers can be very romantic and want to do things that make other people happy.  They also seek approval from others. Their sign is a social sign, so they’re typically around people regularly, though they may come off as shyer than other signs.  Pisces are often guided by their feelings and the feelings of others.  One description of this sign can be moody, but they’re also described as creative, generous and selfless.  People like being around them because of the sense of calm they feel talking with them.

The mystery of Pisces will lure the friendly nature of Leo.  They’ll want to know what’s going on in their dreamy expressions.  They may also want to be a part of the happiness they feel every time they’re around them.  It’s likely that Pisces will be attracted to the confidence and friendly attitude of their suitor.  That take-charge attitude is something they may want to depend on, as they can lose focus often.  Together their differences may meet needs in areas where they’re deficient.

Leo likes to be in control so they may enjoy making the first move when they see Pisces’ attraction to them.  They may experience the reaction from their dating interest:  nervous, shy, and a little flirty.  As they get more comfortable with each other, they’ll find that they have interests that are just as attractive.  Their conversations will be intelligent and a window to their creativity.

Their approach to life is very different, like the Tortoise and the Hare.  Pisces is the Tortoise who lives their life at their own speed.  They never rush to the next great thing, but rather enjoy the moment.  They’ll take in the romantic gestures and outings that Leo plans for them and let them know how much it’s appreciated.  Leo, on the other hand, is like the Hare.  They live a fast-paced life as they move like a rocket to reach the next level in their life.  While they may want to step up the pace in their relationship with Pisces, they’ll have to learn how to slow down a little.

Pisces won’t rush into bed with Leo, nor do they want to rush into an entirely physical moment.  This can bring conflict, but it may also allow them to enjoy their time and their experiences a little more.  They’ll have to figure out how to bring in the intensity of their palpable excitement as well as the slow, passionate love.

The differences are a huge part of the attraction between these two signs, but they can also be the conflict that affects their relationship.  The socially outgoing and flirty Leo will want to continue that aspect of their life.  Pisces likes being with people, but they’d instead share their time with small groups of close friends or just their lover.  They feel that less is more so they can’t relate to the need to be with a large group as often.

Their comfort levels are at different ends of the social spectrum.  They can try to change or adapt to their partner’s lifestyle because they want each other to be a part of their life.  With Leo’s confidence, they’ll go out no matter what, and the reserved Pisces will likely stay at home and wish for more time together.

Moving at a Different Pace

Their pace is another point that can be an issue.  Leo will pack as much as they can into their events, but that’s too much for Pisces.  They don’t feel impatient when taking their time on a hike enjoying the scenery, whereas their partner is looking to the end of the trail like a medal-earning finish line.  Compromise may be a challenge because they may not want to raise or lower their expectations for the other.

Material things and wealth may be an arguing point because of their interests.  Leo will shower their partner with name brands and expensive gifts because they love to give and share.  Part of their goal for success is that they can buy what they want for themselves and the people who’re close to them. They would likely be the financial supporter in this pairing’s household.

In contrast, Pisces would be shocked each time their partner spends a lot of money on their dates and adventures.  Of course, they would enjoy being able to experience these things, but they may feel uncomfortable after a while.  They want natural experiences while Leo wants the fullest adventures that money can buy.

These two signs will have to invest a lot of time and effort to make this relationship work.  While their differences will be exciting at first, they’ll have to take a hard look at the life changes they need to find harmony.  They can learn from each other about changing their pace to enhance their experiences and ideas.  They can bring out the best in each other and show them more of the world around them, but to do it together, they’ll have to want to take the journey at the same pace.