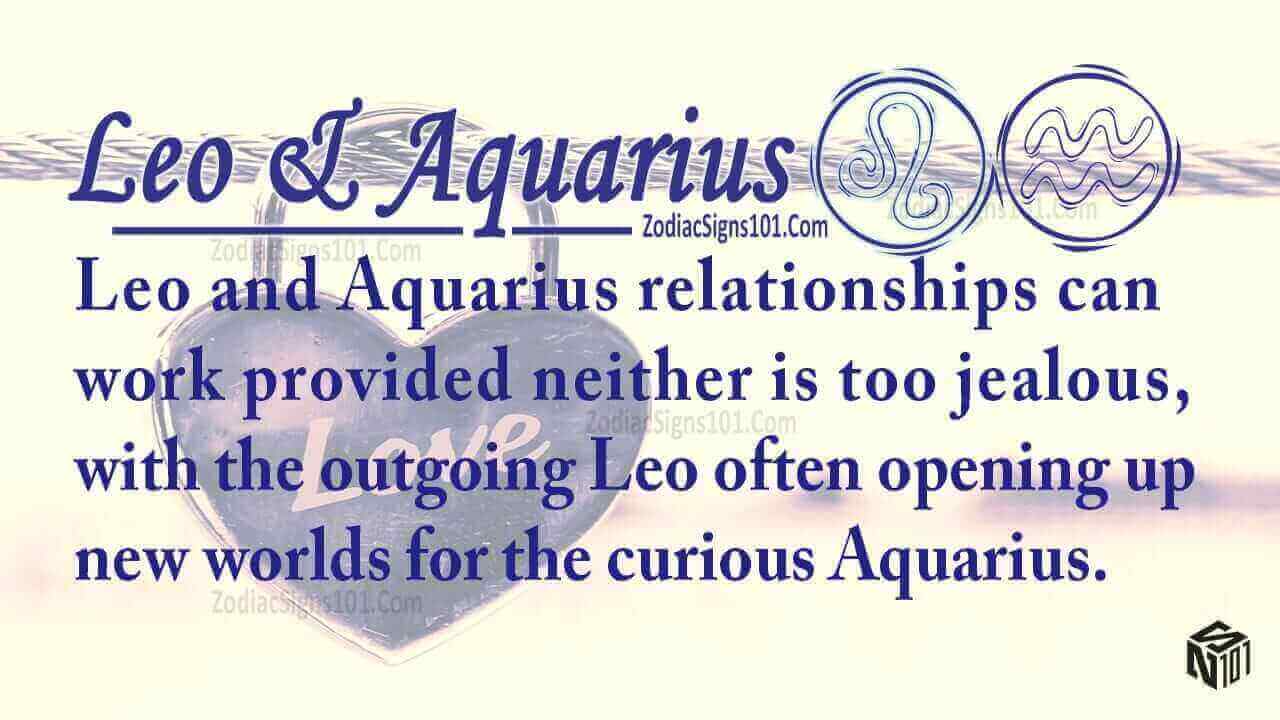 When Leo and Aquarius come together in a relationship, they’ll find that they match each other in energy, enthusiasm, and competitive spirit.  Read on to learn more about Leo Aquarius love compatibility.

Leo (July 23 – August 21) strives to be the best they can be and are even more proud when they’re able to accomplish everything on their own.  They want to be the leader because of their confidence in their skills and ability.  Financial success is just as critical to them as status.  It’s likely that their faith will make them deaf to the advice and resources of others, but they’ll always seek encouraging words and support of those around them.  They’re excited and full of energy whether it’s in the hard work they put into their jobs or their leisure.  These adventure-seekers are competitive and like to prove that they belong at the top of most anything.

Aquarius (January 21 – February 19) is an independent sign who doesn’t want to be tied down by other people’s expectations or boundaries.  They work hard on projects that showcase their creativity.  They’re smart, but not in the traditional sense.  Their intelligence is evident in their conversations and how they express themselves through mediums of art, language, or experiences.  Though they prefer helping from the background, they’re social and enjoy engaging in meaningful talks.  They’ll show their interest in others as their friendships grow and those people become more important to them.  Conversations aren’t trivial, and their activities aren’t routine.  Boredom is a mood killer that makes them leave many relationships.

Not only will they easily find fun and entertainment, but they’ll also find a challenge when it comes to agreements.  Excitement is what they seek, and when these two are dating, they’ll be thinking about their next adventure to keep the energy going.  When it comes to a long–term relationship, they’re likely to spend little time at home because of their work, projects, or adventures experiencing life.  They have two different approaches to how they work, but they’ll seldom find each other annoying.

Both Leo and Aquarius are social, so they’ll likely meet at an outing or through friends.  If they’re at the same event, Leo might be running the show, and Aquarius will show their support in their way.  Neither will be shy, so there’ll be a constant conversation with plenty of confidence.  Their intelligence, as well as their outgoing personalities, will attract one to the other and vice versa.  They’ll be able to talk through the night and discover more in common whether that’s hobbies, sports, travels, or philosophies.

Part of the attraction is their different perspectives and attributes when they work on something together.  For example, say they work on a project together for something they both support.  Leo may seek the joy of crossing the finish line or reaping financial benefits for the project.  Aquarius, on the other hand, may find emotional satisfaction helping the cause or creating success from behind the scenes.  It doesn’t matter what drives them, but their shared excitement for the same thing means that it won’t be dull or boring.

Adventure-seekers like these two signs will have either discovered the same places or share many items on their bucket lists.  Leo is likely to plan their next adventure, whether it’s sky diving, surfing off the coast for the first time, or even a mud run.  No matter what they do, they’ll make it a sporting competition between the two of them.

Leo may even find passion away from their work for the quality time they spend with Aquarius.  They’ll find romance and passion but will also need to work on love and kindness toward each other’s individual needs.  As long as they find the time to keep their relationship from getting boring, they’ll enjoy their lives together in the long term.  Encouragement will also motivate them to be better as a person as well as a couple.  Their common interests and energy can help them achieve this goal.

Even though they have several similarities that strengthen their bond, these two signs will also discover that their differences can create tension.  Their conversations may be animated, but one side may dominate the other too much.  Leo loves to share their ideas and what they’re working on, but after a while, Aquarius may want to hear about other things or talk about their ideas.  The conversation breaks down when they lose focus on each other.  Aquarius, in particular, like more action than talk.  Rather than hearing about the latest trend or new artist, they want to experience it for themselves.

Both of them have dominant personalities, and Leo often believes that they know best.  Sexually they want to be satisfied and focus on the physical.  Aquarius takes a more thoughtful approach and intends to engage in something playful, like role-play.  Their creativity wants to be excited rather than just experiencing physical lovemaking that can become routine.  Their desires may neglect their partner’s if they fulfil their wants without including the other half in sex.  If either of them feels as if their thoughts or feelings are ignored or not appreciated, it can bring about hurt feelings and create negativity.  They have to work on listening to each other as well as telling or showing what they want.  They may even find out that their partner’s idea may be more exciting or satisfying than they thought.

When it comes to compatibility, these two signs are undeniably attracted to each other.  Their energy is exciting, and their interests will often match or inspire each other.  Both of them can run the risk of getting bored when the excitement dies down.  If their conversation becomes one-sided or trivial, boredom may mean the end of their passionate relationship.  Communication will have to be more than just an exchange of facts, thoughts and ideas, but also a deep understanding of each other’s wants, desires, and needs.  They have to learn to be open to a different way of thinking or a different approach.  Both of their egos will have to consider the fact that someone else may have the best answer or plan.