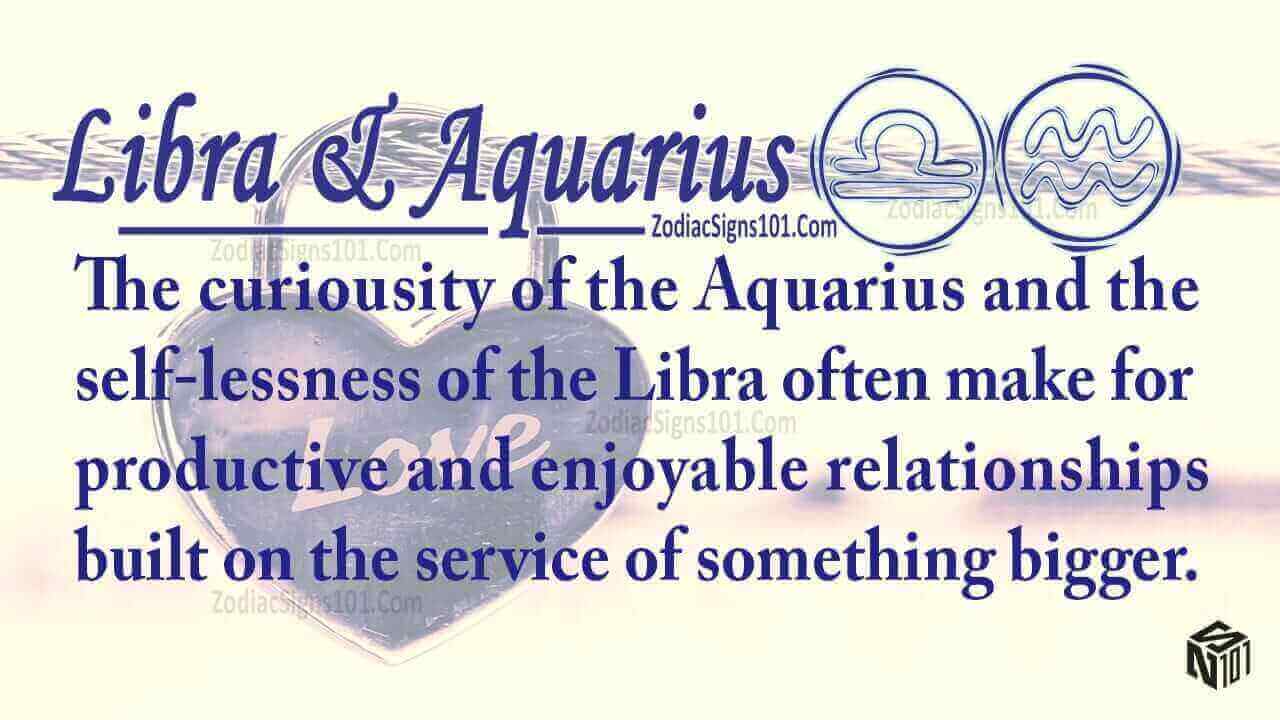 What’s in-store for Libra and Aquarius when they fall in love? Read on to find out about Libra Aquarius love compatibility.

Libra (September 24 – October 23) is a sign that’s ruled by the planet Venus.  This planet controls love, beauty, and elegance.  It’s also female energy.  Libra’s very comfortable spending time with people.  They’re good communicators and are at their best when they’re around others.  They quickly make friends, enjoy their long conversations and love to be entertained by others.  This sign’s also known for its optimistic and positive attitude.  They’ll find good in just about everything as they strive to maintain balance in their life.  When they fall in love, they’re having the best time because it’s one of their favorite parts of a relationship.  It’s new and exciting and full of love and beauty.  There’s plenty to do and share with someone whose company they enjoy.

Aquarius (January 21 – February 19) is ruled by the planet Uranus.  This planet controls instinct.  It’s also masculine energy.  Aquarius’s smart and creative with a desire to express themselves.  This can be done through many possible mediums because not all people born under this sign are painters or sculptors.  Their expressions represent their intelligence and their thoughts.  When they can convey all of this in the way they want to, they’re pleased.

If they cannot financially support themselves with their expressive medium, they’ll find a job that suits their personality.  They won’t settle for anything less because they won’t stay in a position that doesn’t make them happy.  They may seem emotionally detached, but that doesn’t mean they don’t care.  When they can open up to someone, they’ll find that they can share more about themselves and connect on a different level.  That person will likely be their soul mate who can keep up with their energy and creativity.

Both of these signs have a keen interest in intelligent conversation and art.  They also accept each other for who they are and won’t try to change each other.  Their efforts as a team can make positive changes in the lives of others.  Through motivation and diplomatic efforts, they’ll find a balance as well as a passion for what they do and what they believe in.

It’s likely that Libra and Aquarius will meet where they have their common interests.  This could be a rally, an exhibit, or someplace that attracts their ideas and curiosity.  Their initial connection may be from their conversation.  They can talk on the same level and feel comfortable enough to share their thoughts and social concerns openly.  Their debates are thought-provoking and respectful to all sides.  Some of their ideas and topics are unconventional, especially since Aquarius can be eccentric with their visions.  This’ll keep Libra’s attention and excitement as they become more passionate about the possibilities for which they can strive.  The attraction will start at a mental level and grow into something more physical.

Neither of these signs is rational, but that doesn’t stop them from functioning.  Aquarius is an instinctive giver and will give their time and money to support a cause or their friends.  Libra believes in finding balance.  They’ll take more time to weigh their options and come up with ideas and solutions that can make their efforts more effective.

Libra’s the romantic, but it isn’t the romance that keeps these two together for the long term.  When they fall in love, they’ll fall in love on a mental level more than one of physical chemistry.  They won’t smother each other by being clingy or needy for their emotional satisfaction, but they’ll exercise their independence.  Their sexual relationship is a combination of Aquarius’s innovative ideas and Libra’s thrill for entertainment.  No matter if they’re passionate in bed or excited about their thoughts, they share a great deal to bring happiness to both of them.

These two signs may not argue a lot, but that doesn’t mean that they’re a highly compatible couple.  Even though Libra is adaptable and wants to make others happy, there’s only so much they can take if their lover remains emotionally distant.  They want to know love, and they’ll want plenty of attention.  They’ll enjoy working side by side on the causes that mean a lot for both of them, but Aquarius needs to remember that there’s someone else with them who also needs love.  If they’re going to remain in a long–term relationship, they have to do some nurturing.

Libra puts emotion and fairness into their decisions, which is part of the reason why they struggle with making choices that affect other people.  Aquarius may get impatient with this because a lot of what they do is about taking chances.  Rather than be bothered with it, they can show their partner the benefits of rebelling a little and standing behind their decisions.

Aquarius can come across as aloof and show little emotion.  How they express themselves is more through their artistic and creative mediums than in their conversation or actions with others.  Even though Libra enjoys their intellectual compatibility, their romantic heart may ache for a more emotional connection.  It may take baby steps, but Libra can show their partner other ways to show a little more emotion.  It can be about the things they’re passionate about or about their feelings toward each other.  If Libra tries to push too hard, Aquarius won’t stay around with someone who doesn’t respect them for who they are.

When it comes to compatibility, these two signs are terrific friends and partners.  A romance means they have a lot to gain and a lot they can learn from each other.  Libra will likely take the lead in the relationship to maintain control.  It’s difficult for either of them to stick with routines or daily duties, but they’ll be able to work something out together.  They’ll find a way to respect their partner’s freedom and enjoy their time in their social circles.  When they’re apart, they’ll be happy to reconnect, share what they’ve learned and inspire new ideas of their own.  It isn’t the most traditional love compatibility compared to the other signs, but it’s one that can work for these signs.