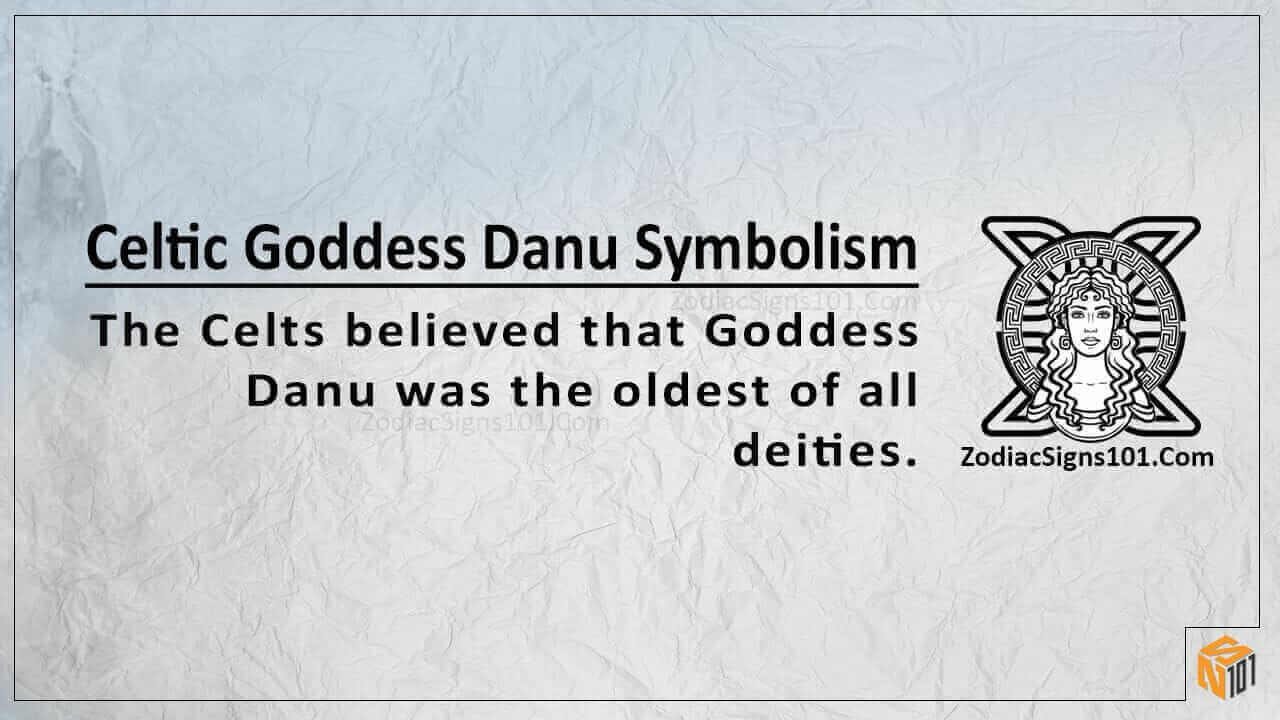 Celtic Goddess Danu Symbolism: Are You One of Her Chosen Children?

There is a significant influence that comes with learning the Celtic Goddess Danu Symbolism in the lives of many people today. Plus, there is a rich history and meaning that comes from it. This is because the people of ancient Ireland had such fascination with the spiritual world. Therefore, they had gods and goddess in many numbers.

Each of these deities had a representation on which field they signified in the lives of the Celts. However, the Great Mother was the goddess of all gods and goddesses. This is because she is the one that appears to be active and central to many factors in the Celt world. Danu as a goddess is the sole representation of the teaching, wisdom, wealth, abundance, and knowledge.

This is one of the reasons she touches on many factors of human life. Plus, the Celts believed the Danu was the oldest of all deities. Therefore, some of them had the notion that she must be the original deity. She has the flow of feminine power; consequently, she can appear in the form of a mother, maiden, crone and the divine lady.

Danu Symbolism: Where Does the Great Mother Come?

According to the ancient text of the Celtic world, they had the belief that goddess Danu was from a royal family. Plus, she has a secure connection to the Tuatha de Dannan which is the imperial family of the divinities. This name loosely translates to the “The Children of Danu.” This by extension gives Danu the matriarchy. However, it does not mean that she is the mother of the other gods. Plus, the Celts had the belief that this family is the representation of the people and the wise gods.

So, a long time ago, the Gaelic invaded Ireland and took power from its people. However, there are the people of the family of the Tuatha de Dannan that escaped. They transformed into fairies; therefore they are shapeshifters. Later they came back in forces and took back the land for the people Celtic people. During this revolutionary moment, the shapeshifters were under the command of the Great Mother. In her role as a deity, Danu became the protector and creator and has held the same station as a goddess ever since.

The Symbolic Meaning of the Goddess Danu

The great mother or the goddess Danu has a lot of symbolic meaning that she can portray. I believe that she is an excellent example of what feminine power is. She has the strength, energy, and courage to revival any masculine presence across the multiverse. Also, Danu is the sole embodiment of growth, change, abundance, fertility, nurturing, and agriculture. When you look at the history and the mythology of Danu, she loves life regardless of its origin.

Plus, she has taken up the role of protecting the same lives. In most of the imagery from ancient Celtic texts, Danu is always beside animals. Or, she would be out in nature enjoying the bliss of her creations. Also, she has a close relation to the other physical elements like water, earth, air, and wind. Some believed that Danu was the ruler of the seas also. This was because of her lunar and earth affiliations.

She represents the flow of this world as she is the one at the center of it. Plus, the great mother is the one holding all life and matter together. Danu is not as an evil deity; however; she was shown to be a vicious adversary. In the ancient Celtic wisdom, the great mother allows the rivers to flow into oceans to teach us the need for flow in our life. For example, the flow of ideas and dreams that we are going after in life.

The Symbolic Traits of Goddess Danu

Just like she appears as the symbol at the center of the Celtic fivefold symbol, Danu represents all the natural elements. This means that she encompasses the flow of all the energies of the universe through her. This is one of the main reasons that we have a balance in life. Also, she is the sole embodiment of adaptability. Remember that I said she could take many feminine forms. Therefore, this shows us we need to be flexible in life.

Also, we need to accept the changes that are coming into our life. Moreover, when the great mother takes a new form, she is doing so to show us that we can change and take charge of our lives. There is no need for us to feel sorry for ourselves besides it is our own lives that we are talking. We can be able to achieve all the thing we set our mind. All we have to do is to work hard and maintain discipline in our lives.

In each and everyone, there is a great deal of passion that can lead to greatness. If you are having doubts, then you can pray to Danu. She will always lend you a listening ear and give you guidance in your life. All you have to do is open your heart and mind to the teachings and influence that she is offering to you. Remember that Danu is also a goddess that preaches patience. You can never attain your dreams at the snap of the figure. However, you need hard work and perseverance.

Danu, the goddess, is the mother of all creations according to the Celtic people. Plus, she is the protector of everything under the sun. In the ancient texts, Danu is also the representative of all gods and goddess in the world of Celts. She acts as the interlink for the communication and the power of other Celtic gods. However, she is such a nurturing goddess make life easy for everyone. Therefore, you should learn and adhere to the guidance and teachings of the Great Mother, goddess Danu.