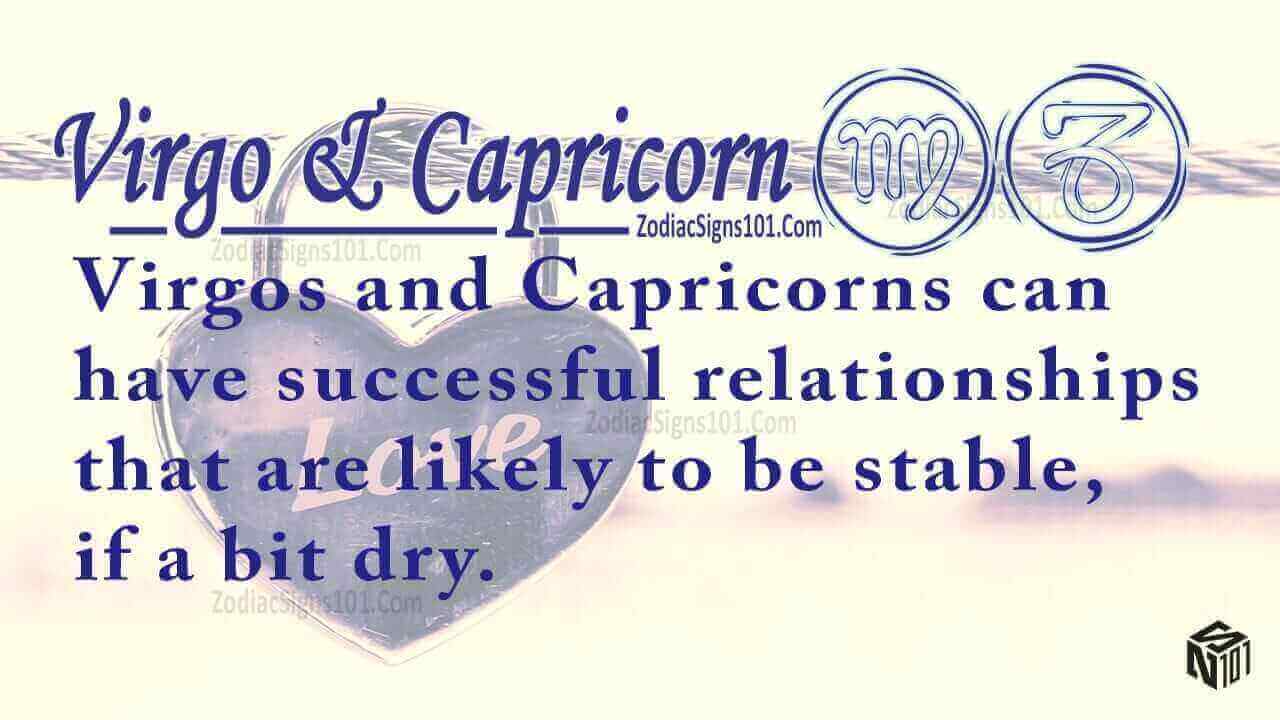 Can Virgo and Capricorn live a happy life together, or are they better off as friends? Here we take a closer look at the details of Virgo Capricorn love compatibility.

Hard-working and perfectionist are two words that describe Virgo (August 22 – September 23).  Rather than looking at the world as a whole, they slow down and look at the little things.  That attention to detail is part of what makes their work so well-received.  They’re logical and analytical and look ahead so that they can anticipate problems and have a solution ready.  Often, they work so hard that they forget to have downtime.  They don’t go out socially often. Instead, they enjoy time with close friends and family or spend quiet time at home.  As controlled as they are with their schedule and projects, they don’t have the same level of control on their emotions.  They have a strong work ethic and a strong belief in traditional family values.

The independent mindset of Capricorn (December 23 – January 20) believes in hard work and passion for what they do.  They succeed in life because of the routine they establish for themselves.  They’re confident enough to achieve what they can on their own and not have to ask others for help.  However, they’ll be there for their friends and help them to the best of their ability.  They spend a lot of time on their work that it may seem that they don’t have the time for others, even though they do.  Capricorn is resourceful and smart and can easily engage in conversation with just about anyone.  They don’t have time for one-night stands or casual dating.  Instead, they’re looking for someone in their life who’s interested in a commitment.  They also want someone entertaining and not superficial.

A relationship between these two signs is as comfortable as it is engaging for them.  They share so many similarities that they’ll have little problem finding something in common daily.  They’ll respect their personality traits because they share many of them.  There are several reasons why this couple is so compatible.

Both of these signs want to be the best at what they do.  Different goals drive them, but they put their energy into all aspects of their lives.  Capricorn wants to be the leader in their field and will work hard to achieve that goal.  Virgo submits the best work possible for their satisfaction and expects nothing less.  They’re focused and motivated.  Both of them will be intrigued and entertained by the level of conversation they have with each other.  A trivial conversation about the weather or the latest celebrity gossip will bore them and have them look elsewhere.

Not only will they share ideas and collaborate on projects they’re working on, but they’ll look forward to their conversations too.  Their understanding is also essential because they’re straight-forward with each other and don’t play games in their friendships or their love life.

Another similarity this couple shares are traditional family values.  They’re the ones who’ll wait to have sex or get married rather than rush into love impulsively.  They also have their sights set on building a stable and secure home with children and years of being together.  Working hard is one of the ways that they provide that stability.  They want financial security, and Capricorn wants to have the wealth and status that comes with the work they put into their careers.  Some signs may see their stability as boring, but this is how they enjoy their lives together.

They rarely go out but rather prefer to socialize within their small circle of friends or in the comfort of their home.  Not only do they connect in this way, but they’ll still be able to find out new things as they grow together.  The same is true for their sexual relationship.  Their connection may not be filled with bold sex positions or gimmicks, but rather a strong bond that they built over time with love and understanding.

Capricorn is a hard worker, but they have a better handle on being able to relax and unwind their work is done.  This concept is a challenge for Virgo because it seems that none of their work is ever done.  Their partner is a good role model to help them find the balance that’ll reduce their stress and allow them to enjoy more time with their family at home.

Their common interests and beliefs make this couple very compatible, but that doesn’t mean that their relationship is free of disagreements and conflict.  There are aspects of their personalities that are different and can create some tension.  For example, Virgo may have their life in order, but they struggle when it comes to dealing with their emotions.  They’re very logical, but this sometimes goes beyond their logic.  It isn’t something they talk about readily, nor do they know how.  This becomes a problem when their Capricorn partner wants to help them, but they don’t know how to explain or express their feelings.  Even though they’re strong communicators, they’re more likely to keep to themselves than talk to someone.

Virgo needs to have trust in their partner who’s ready to help them in the best way possible.  This may not be as evident at the beginning of the relationship, but over time, they’ll be able to see the triggers and know how to handle the problem before they’re both overwhelmed.

Both signs can be stubborn.  This is often the case when they’re working on something and are determined to do it all on their own.  Their opinions can get in the way, and their pride can get hurt if others don’t understand why they’re acting this way.  When both of them are stubborn about the same issue, they’re very likely to argue, but these arguments are pretty rare.  This couple can be reasonable and be open to other opinions and conclusions rather than allow a misunderstanding to divide them and their love.

When it comes to compatibility, these two signs are very compatible because of their shared personality traits.  Their shared traditional values give them the structure they need to build a secure and stable home so that they can raise a loving family and live happily together.  Their differences keep their relationship fresh and can complement their partner.  Virgo can deal with their emotions and stress better with their partner’s guidance, while Capricorn can learn to be more open to help or new ideas.  This couple will find it easy to love each other once they get the ball rolling as friends.