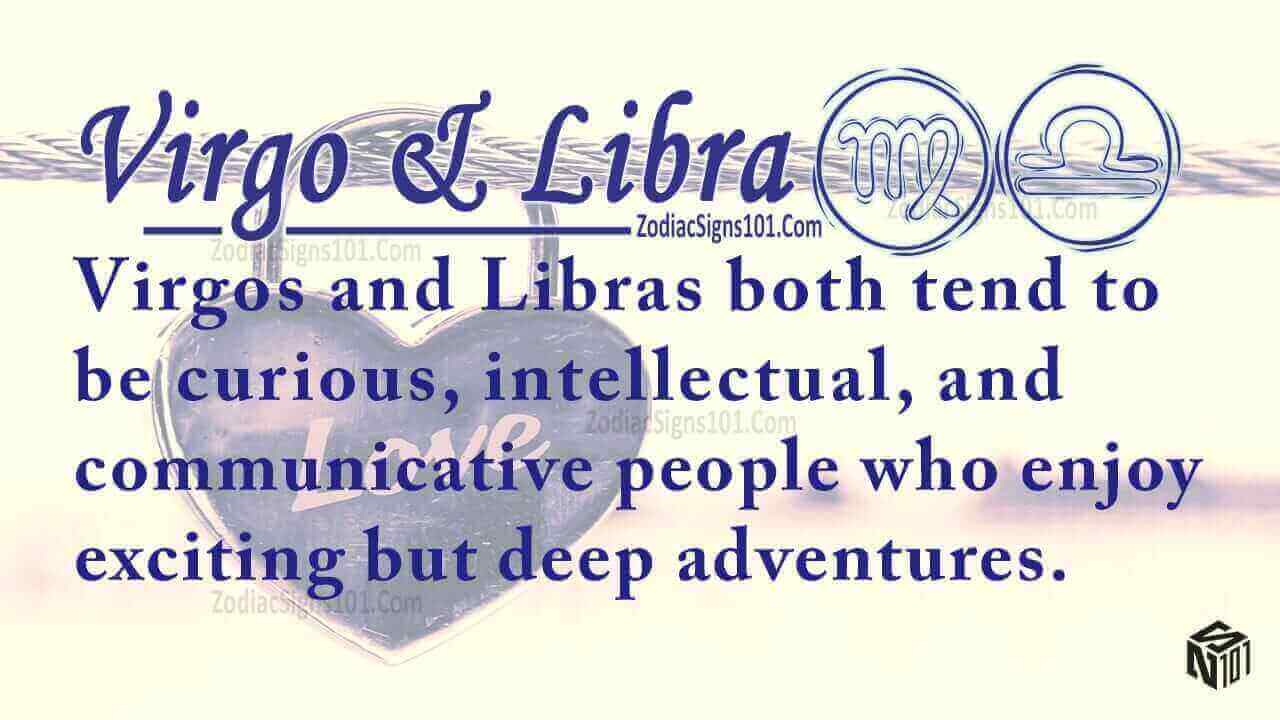 What’s in store when Virgo and Libra fall in love? Here we take an in-depth look at the Virgo Libra love compatibility.

No other sign is as driven to make things as perfect to the finest detail as Virgo (August 22 – September 23).  They’re the person others want on their project team.  Whether the role is party organizer or club treasurer, they’ll make sure to cross all the “t”s and dot all the “i”s.  When a problem comes up, they’ll use their logic and resources to find a solution.  They also look ahead to predict and prevent problems that may arise.

They take on a lot of responsibility as they support their friends and coworkers and sometimes that can take a toll on them.  Virgo’s known for getting stressed over impending deadlines or anxious that something isn’t good enough, even if they’re receiving rave reviews.  Their idea of relaxing is something that keeps their mind working.  They enjoy conversations with good friends and completing puzzles or logic games.  They aren’t impulsive risk-takers, but they’re often willing to try new things.

Libra (September 24 – October 23) loves to be around people.  There’s enough of their positive attitude to share with others, and they share it in both the workplace and in their daily activities.   Routine helps keep them organized, but they can get bored with the monotony.  When they try something new, like a new restaurant or a weekend adventure, it keeps them stimulated and re-energized.  They need to be entertained in their work, play, and even their sex life.  They’re strong communicators who’re smart and resourceful.  Libra also tries to maintain balance in their life through their schedule or relationships.  For them, falling in love is the most exciting part of any romance.

A relationship with these two signs is a positive one with their common interests and opposing traits, balancing them out as a couple.  They enjoy the company and interests they share, but they also complement each other when their strengths support the other’s weaknesses.  Both of them are looking for romance and love rather than a casual affair.

Their personalities make them opposites, but that doesn’t work against them in a relationship.  Virgo is shyer and reserved than Libra, but that won’t stop them from getting to know each other.  Libra’s social strengths will give them the push to introduce themselves and see if their attraction is mutual.  Not only do they have their cheerful personality going for them, but also their intellectual conversation and creative ideas.  Virgo is straight-forward and doesn’t fall for cheesy pick-up lines or silly tactics.  They may seem all business, but they’ll realize that they match in terms of their search for a stable relationship.  Both of them share the same traditional values, which means they’re both looking for long-term relationships.  There won’t be any pressure to rush into sex or do anything that goes against their beliefs.

Virgo’s analytical personality, whereas Libra’s more creative.  Also, Virgo will remember milestones or favorites to surprise and delight their lover.  Libra will make sure that their partner gets just as much attention even if it’s just drawing up a warm bath after a long day’s work.  They’ll come up with creative ideas and will bring a part of their relaxed mannerisms to their lover.  Their efforts will bring calm and balance when stress and anxiety start to bother their partner. While their work ethic differs, they’ll find that this benefits what they can do as a couple.  They may not even know that their perspective on the world changes the more they spend time together.

As the pair become closer, there’ll be aspects of their personalities that may annoy each other.  Virgo’s hard working to the point of perfection.  They put their best foot forward and would expect everyone to be as motivated.  Libra’s not as driven as their partner.  They get the work done by the deadline with a chance of procrastination, but it may not necessarily be their best work.  It’s beyond their comprehension why someone would work their fingers to the bone when “good enough” is acceptable.  Because of their laid-back approach, they’re more adaptable to change, whereas an unforeseen problem puts a lot of stress on Virgo.  They have an opportunity to learn from each other, support each other in their weaknesses, or go their separate ways.

The creative side of Libra can also bring out the emotional side of Libra.  Virgo’s more focused on logical explanations and analysis that leads to solutions. They don’t let their emotions get in the way.  At the same time, they don’t know how to deal with people when they struggle emotionally because they rarely have to deal with it on their own.  While they’re both excellent communicators, it may not be something they want to talk about when they’re still getting to know each other.  In time they’ll learn how their partner ticks and what may trigger some of their emotions.  With time, love, and patience, they’ll both have an easier time coping with these problems.

There are other ways that they aren’t as compatible.  Their social differences and how they interact with each other may have been one of the things that attracted them to each other, but it may not help them as they grow as a couple.  Virgo may go out from time to time, but they prefer to stay home and spend quality time with their family.  Libra wants to remain in contact with their friends, which means they’ll go to the sports bar after work or take off on the weekend with friends.  It isn’t that they don’t enjoy the time they spend together, but they have to figure out a compromise.

When it comes to compatibility, these two signs want the stability and security of a long-term relationship, and it’s something that they can both achieve.  They complement each other where they are opposites, and love to share where they have common ground.  Their ability to communicate keeps them interested in each other as well as helping them when they disagree.  They have a lot of potential, but they also need to compromise and adapt.