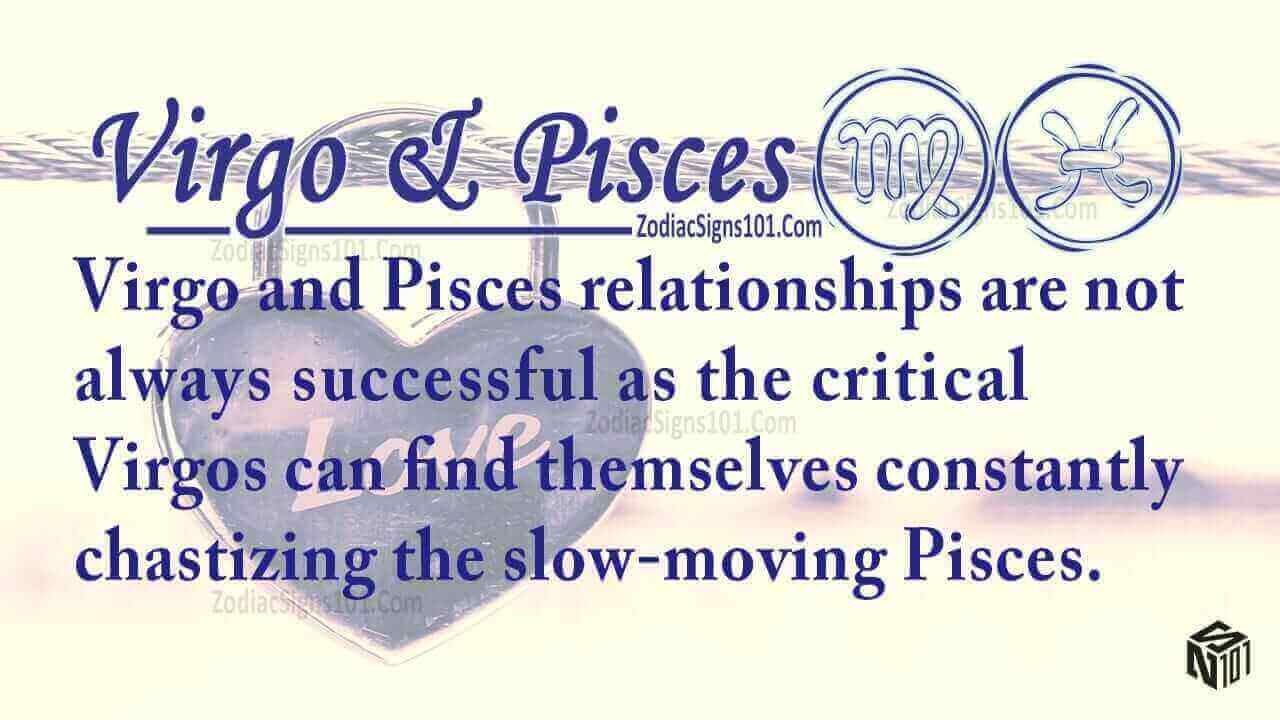 Virgo Pisces love compatibility can be full of romance and love, but will their differences cause too many issues for them to overcome? Read on to find out.

Virgo (August 22 – September 23) is passionate and strives to produce the best work with their best effort.  They don’t leave any detail undone because of their perfectionist attitude.  The energy they put into their work is the same level of effort they put into their home and their social life.  They don’t socialize regularly because they prefer to spend time at home.  Rather than go to the club, they choose games of logic or crafty projects that keep their minds busy.  They follow a routine so that they can keep their life in order.  The structure they live by makes them comfortable, but they’re always predicting any problems that can create an issue.  They prefer logical reasons over spontaneous reactions.  They’re also into love for the long-term and not for short-term pleasure.

Pisces (February 19 – March 20) may seem to have their head in the clouds, but they understand romance and emotions.  In many situations, they’re guided by feelings and live for the moment without rushing into anything.  Not only do they enjoy bringing happiness to people, but they also look for their approval in the things they do.  This is true in their work and their friendly gestures toward others.  While they’re giving of their time and money, sometimes they give too much and don’t take care of themselves.  They like to be around people, which makes them more social than introverted.  However, there are times where they’re moody and want to stay at home with their thoughts and dreams.

The similarities that these signs have can make a loving, long-term relationship full of engaging conversation and romance.  They’d do anything for each other and collaborate over creative ideas and dreams.  At the same time, their differences can either bring out the best in them or cause issues that they can’t overcome.

The attraction between Virgo and Pisces may start with their differences.  A fresh point of view combined with good conversation can be the starting point for this couple.  They’ll be curious and interested in knowing more and teaching the other.  Virgo’s a strong communicator, and Pisces is more social and enjoys talking with other people.  Even if they don’t have as many common interests, they have no problem talking for hours about anything.

Conversation and communication are the tools that they’ll rely on when there are issues in their relationship.  They’re comfortable enough with each other that they can talk about their problems and concerns and work on a way to compromise or find balance.  They’re both flexible to a certain extent, so they’re both open to anything that’ll make them better as a couple.  For Virgo, they’ll be able to help Pisces to be more stable.  They make great teachers and can show their lover what it takes to follow more of a routine and take on more responsibilities.  At the same time, Pisces can help Virgo deal with their emotions.  When life gets overwhelming, Virgo can struggle with the emotional side of life.  Pisces is good at dealing with people’s feelings and can help their lover relax.  By taking care of them, they’re taking care of their relationship.

Even though Pisces is more social, Virgo is more dominant in this relationship, and that may be a new position for them.  They’re usually in the background of their work and supporting others rather than leading them.  They’re still capable of doing it, but it may be unfamiliar territory.  At the same time, Pisces is at their best when they’re guided in life and their relationship.  They’re great supporters, but they often need someone to motivate them or get them through things in life.  No matter who’s in charge, they’ll be loyal to each other and faithful because that’s how they fall in love.

Sometimes the differences between Virgo and Pisces aren’t as easy to deal with.  Even though they can communicate and talk through problems, there are some issues that they cannot handle and can hurt their love life.

Stability is a huge concern for Virgo, and that’s one area that Pisces lacks in.  Some of the most creative people are disorganized, and Pisces is an excellent example of this.  They’re creative, but they’re also dreamers.  Their ideas are great, but if they dwell on their plans more than real life, they lose a lot of time in their day when it comes to their responsibilities.  This is a big problem with Virgo who lives a life of structure and routine.  A challenge to their structure annoys them.  Pisces needs the attention and guidance to keep their life stable, and Virgo may not have the time or energy to deal with someone who isn’t as motivated as they are.

Financial stability is another area of concern for this couple.  Virgo’s work ethic comes with the determination to be financially secure so that they can build a home and take care of their family.  They keep a budget and maintain a frugal lifestyle.  The value of money isn’t as easy to understand for Pisces.  They know that they have to work for money, but they’re challenged when it comes to saving or living within their means.  They love to spend their money but need more guidance when it comes to making sure they have enough to pay their bills.  Impulse buys such as tickets for their next trip or clicking on the donate button online for their favorite organization are too easy for them.  Virgo can help them manage their money, but they may not be able to help them with their love for spending.

When it comes to compatibility, these two signs can come together in conversation and emotional connections.  They know how to take care of each other and show them love and loyalty for a very long time.  The problem comes when their differences don’t come into balance for them.  Virgo may see Pisces as immature and irresponsible when it comes to the life they want to lead.  Pisces will do what they can to make their partner happy, but sometimes it’s hard for them to change.  They’re able to work together and make a happy, loving relationship that’ll last for years, but they cannot reach that point in their relationship if they cannot make sense of their differences.