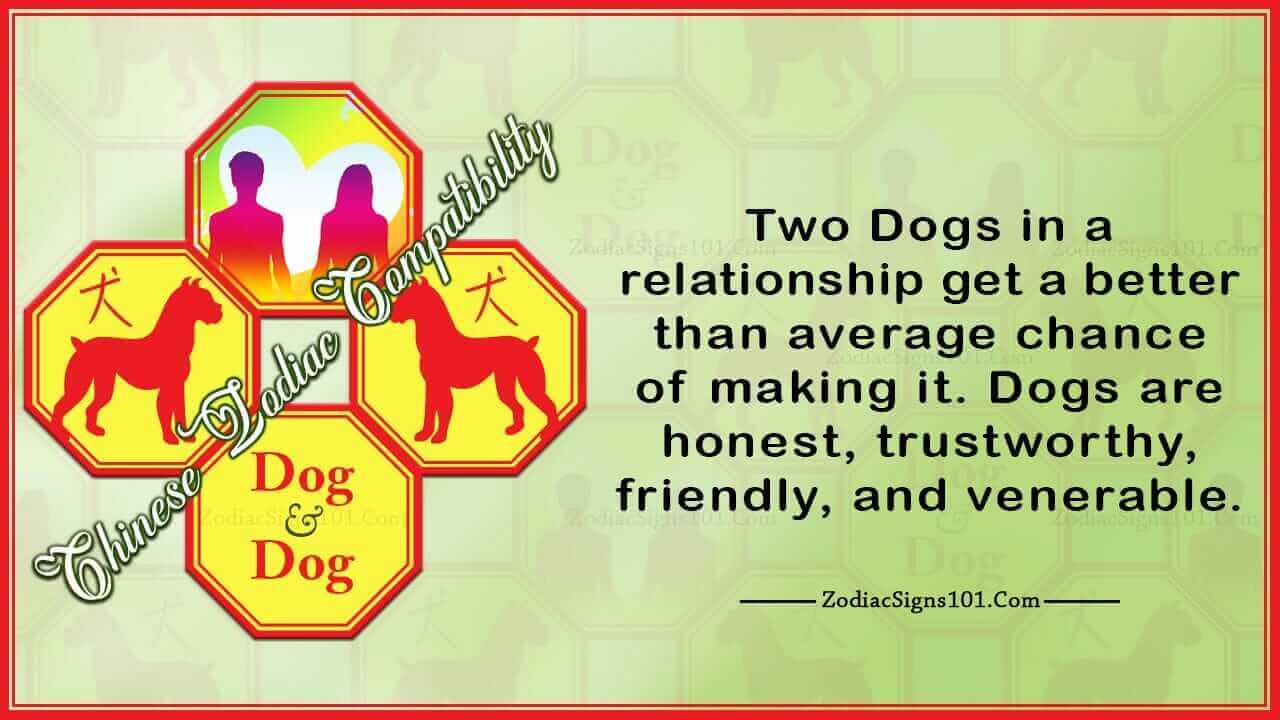 Have you ever wondered what it would be like if two people of the same Chinese zodiac sign got together? It happens all of the time! In this article, we’ll take a look at Dog Dog compatibility– aka, what happens when two people, both born in the Year of the Dog, get into a romantic relationship!

People who were born in any of the years listed above are loyal, clever, brave, valiant, and active. They also tend to be a little emotional, stubborn, and conservative. Also, they are straight forward in their speech. Dogs are amazing at getting other people to gain confidence when they need it.

When Dogs are stubborn, it can really help the situation or it can cause a lot of problems. The same thing goes for when a Dog is in the lead of a situation. Because Dogs are emotional, they can let their emotions cloud their judgment. This is a bad combination when it comes to their being stubborn.

If a Dog makes a promise, it does not have to be worried about whether or not they will follow through with it. These people are very dedicated to the people that they get close to. It should also be noted that they have a keen sense of what is right and wrong. They usually do their best to do what is right according to the situation. 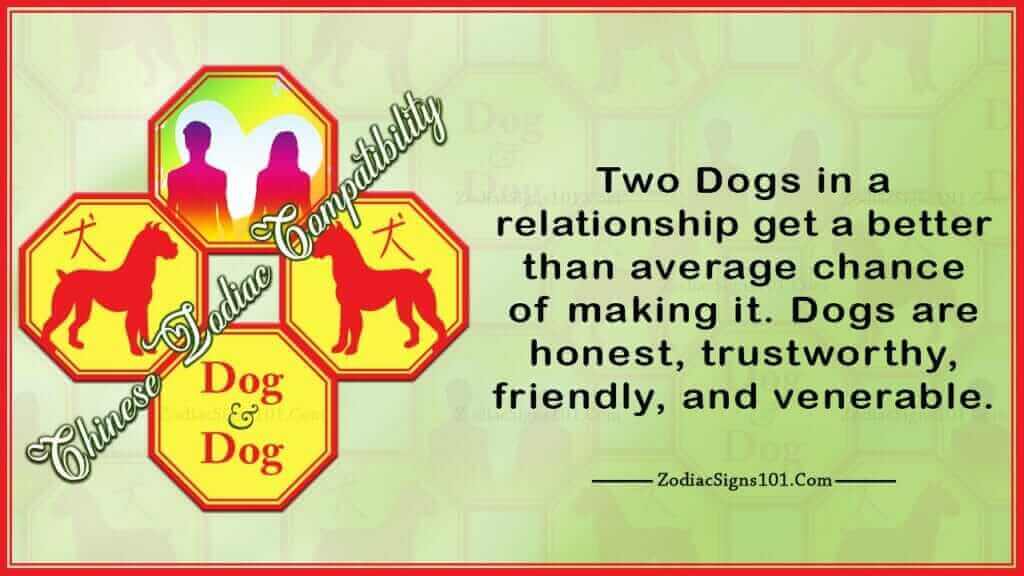 Two Dogs in a relationship get a better than average chance of making it. Dogs are honest, trustworthy, friendly, and venerable. So while they are not the best match for each other, they can absolutely make it. Dogs can have a lot of anxiety about relationships. Therefore, one plus is that they do not have that when it comes to a Dog Dog compatibility relationship.

They love adventure, being social, and they have high principles. Because of this, they do not accidentally hurt each other.. Dogs get along well together in a partnership because of the trust they have in each other.

Dogs have high standards (or principles) for both themselves and others. This can balance out oddly enough. Dogs know they can be themselves around each other because the other will not try to take them down as others might. This is one important aspect when it comes to Dog Dog compatibility.

Dogs are honest, loyal, and trustworthy. This can lead to a lot of discovery of themselves and each other. They will not make fun of each other. Better yet, they might even encourage the other to try something new or to get out of their comfort zone. Seeing as they both enjoy adventure, there is little to nothing to stop them both from trying the new thing. Their general curiosity can also drive them to dig deeper.

Dogs, overall, can be a little like children. They can be spitting venom at each other one second and then hugging and apologizing the next. So if they do not step too far out of their bounds during an argument, it takes little to no time at all to recover and make-up.

When it comes to Dog Dog compatibility, things can really be on thin ice. They are both blunt and sensitive, not to mention sometimes incredibly vulnerable. So, you can imagine how arguments between these two can go. One wrong sentence and things fall apart. Also, since they are stubborn, that can cause even more problems because they will not be able to change the other’s minds.

Dogs have to be careful of what they say in arguments. They are both witty and fast thinkers, but that can cause a lot of trouble. When getting into a heated fight, it is possible for them to forget exactly who it is that they are fighting with while remembering the small details that can take them out for the count.

Two Dogs being in a relationship is not the best someone could ask for, but it is pretty close. When it comes to Dogs, they are loyal, quick-witted, and they can sometimes be brutally honest. Being brutally honest can cause some trouble at times because Dogs are sensitive people. So, it can be a little too easy to take a low blow when in the heat of a fight.