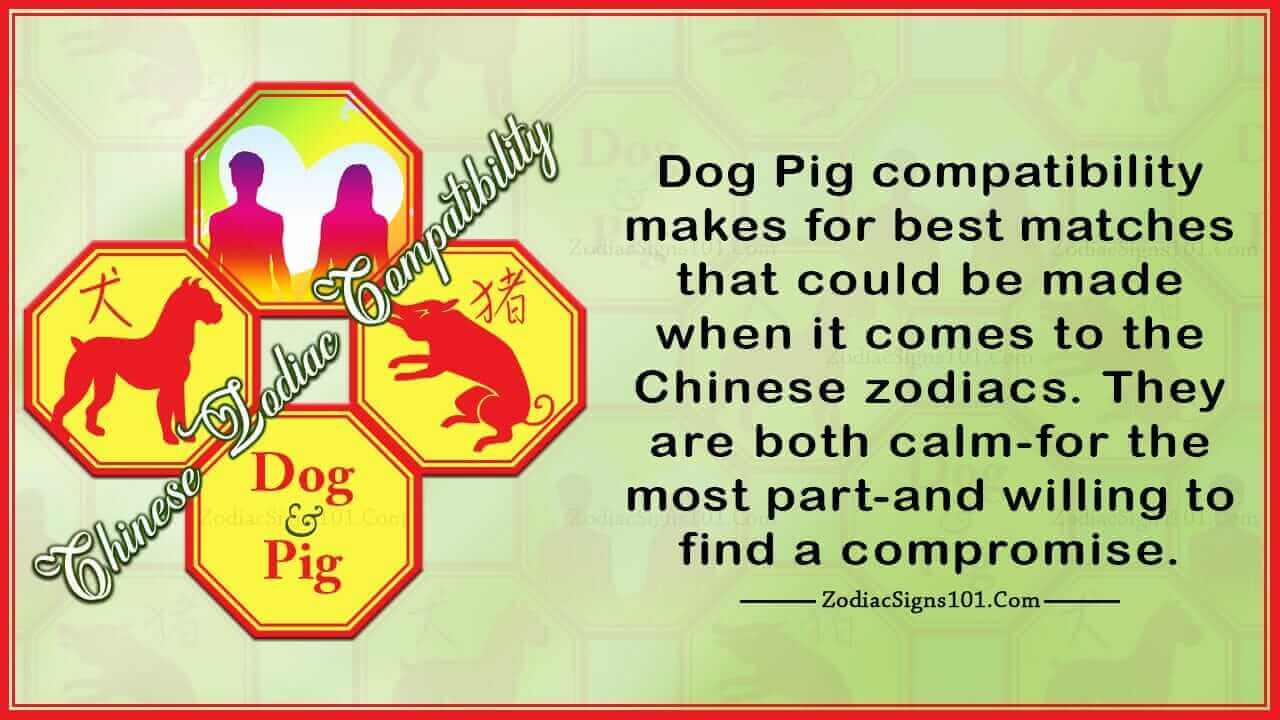 Dogs and Pig are not the most unlikely match are normally do pretty well together. Overall, they have a 75 percent chance of making it to the end together. They can really make a peaceful life together. Pigs and Dogs both a have a gentle kind of happiness together which results in a beautiful blend when they come together. Learn more about Dog Pig Compatibility below!

People born in any of the years above are rather interesting people. They are not at all afraid of the different challenges that life might throw at them. It does not take them long to find interesting ways around the problem. In addition to being motivated, they are also loyal, brave, lively, and responsible. They are also stubborn, sensitive, and at time emotional. They usually prefer things to change at a slower pace so they have time to adjust.

Dogs are not fans of injustices at all. Often times, they will reach out to help others whenever they can. It can take a while for a Dog to warm people, so they can appear cynical and untrusting at first. However, once they really get to know you, they can be some of the most loyal, trusting, and trustworthy people you could ever meet.

When it comes to Dogs and their relationships, there are very few people that they tolerate. They either love you or they can not stand the sight of you for longer than they absolutely have to. While Dogs are always willing to help other people, they tend to keep their own lives to themselves as much as possible.

People born in any of the years listed above are kind and gentle people. However, they can also have a habit of being lazy and gullible. They are highly considerate of others. Pigs are independent, and they do their best to always look on the bright of side things. These people are also mildly tempered, honest, and warm-hearted. On the other hand, they are also naive, usually impatient, and they can be some of the laziest of the Chinese zodiac signs.

Pigs are very determined people; the second they set their mind to something is the second they begin putting all of their time and energy into seeing it done. They do not like getting help from other people, but they do love helping them. When in trouble, Pigs are very calm and do not lose their cool for more than a few seconds if they do at all. If a Pig starts a project, they can find interesting ways to get it done and they are very responsible while doing it.

Both parties have a strong love and devotion to their family. They are both loyal and able to trust each other so they can build a very strong bond without too much and stress from either side. When it comes to Dog Pig compatibility, they always supportive of each other. They do not take the time to think badly of each other and instead funnel their energy into backing each other to the best of their ability.

Because Dogs can be a little emotional at times, they can sometimes be up and down and all over the place with how they are feeling and how they are doing. The Pig’s calm can help to balance the Dog’s activeness. Seeing the partner so calm can relax them. If Dog is stressing over something and Pig is just pacing their way through it can show Dog that there is nothing to really get worked up about.

Sometimes, though, that is not enough and Dog needs to be alone for a bit to figure out their feelings or to find a different way to calm themselves down. That is perfectly alright to the Pig. Dog knows that they can go do what they need to and that Pig will be there for them when they get back.

Dog and Pig are both very friendly and inviting people, but this can get them into trouble. If someone sees how inviting they are, then these two can be taken for granted and used. While it is amazing there are people that are so welcoming, it is important that they are not too nice so they do not get caught in a rut. 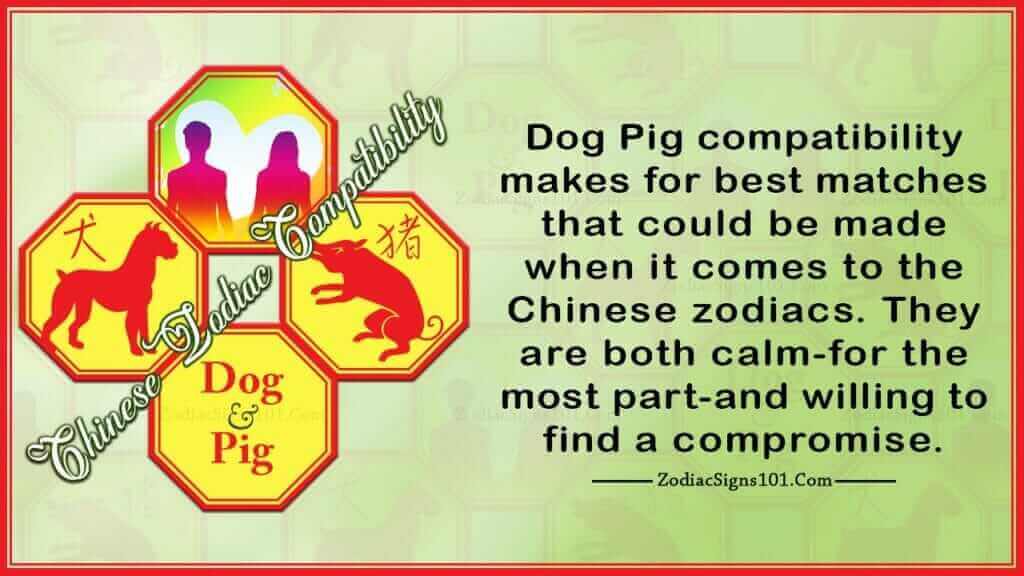 Dogs tend to be very high energy. They always have to be doing something or they get stir crazy. Pigs are just the opposite and prefer to get their work down so that they can just sit and relax after a day’s work. After a Dog is done with work for the work, they might want to go out and do something with friends while all Pig wants to do is sit down and watch a movie. The dog is usually pretty good at understanding this and might try to find some sort of a nice middle ground or they will even just give in to a night at home and really get into the movie before too long.

Dog Pig compatibility makes for best matches that could be made when it comes to the Chinese zodiacs. They are both calm- for the most part- and willing to find a compromise. They have to be a little careful at times of not letting people walk all over them, but they can usually have each other’s backs.

These two can work well together. While Dog prefers to get things as fast as possible, Pig likes to take their times to get it done. They reap the feeling of knowing the job was done well. They can motivate each other perfectly. This is because the Dog keeps the Pig from getting lazy at the time. Sometimes, the Pig has the perseverance that the Dog might lack.