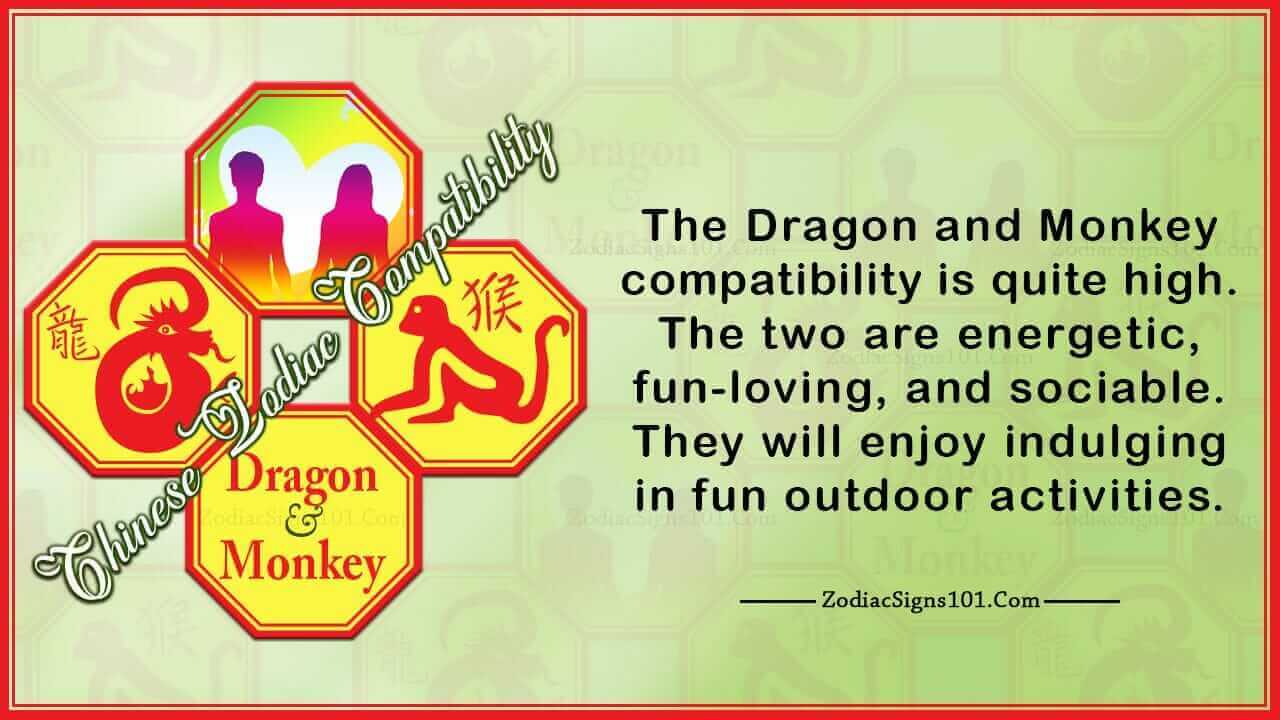 The Dragon Monkey compatibility is quite high. The two are energetic, fun-loving, and sociable. They will enjoy indulging in fun outdoor activities. They will have an easy time forming a successful relationship. This is because they enjoy similar things in life. Although, they will have some differences between them they will be able to complement each other quite well. The Dragon Monkey compatibility looks like a wonderful match. Will this be the case? Let us have a look at how this relationship will turn out.

The attraction that the Dragon and Monkey have towards each other will be quite strong. Each of them will fall for the other’s passionate and exciting side. The Dragon will fall for the Monkey’s gregariousness. The Dragon will see the MOnkey to be full of life. On the other hand, the Monkey will be fascinated by the energy and fire the Dragon holds. When they come together, they will enjoy living a fast-moving lifestyle. This kind of strong attraction will be important as it will create the needed foundation for the success of this relationship.

The Dragon and the Monkey have a lot of things in common. First, they are fun-loving. Each of them loves to go out and spend time with friends. The two thrive on this and would never leave this kind of a lifestyle for any other. They will often hold hands and go out to explore all the corners of this world. In addition, both are very energetic. Due to this, they will live a very energetic life together. 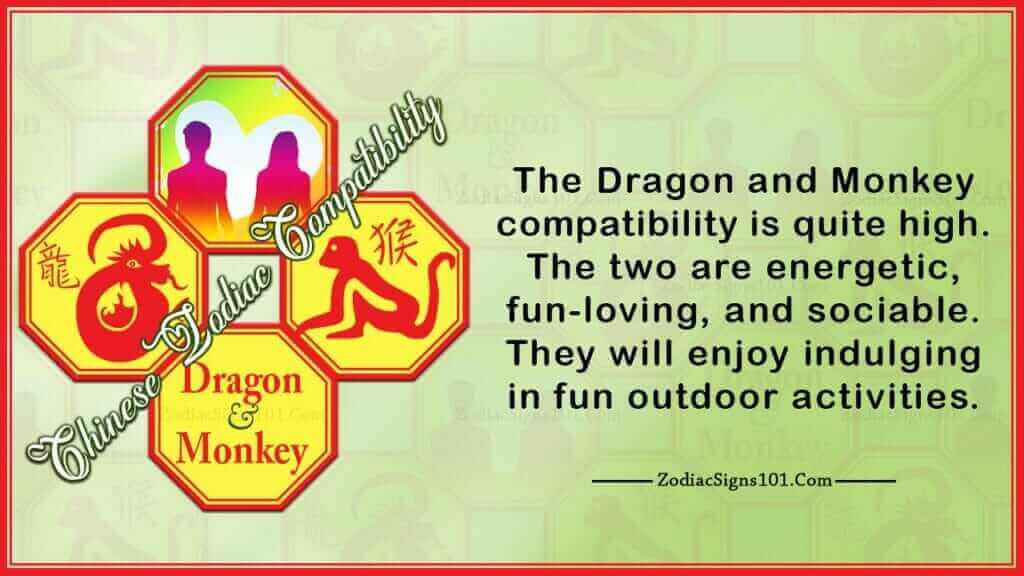 Moreover, the two are determined, motivated, and optimistic. They are hard workers that are always ready to put in the needed effort to get what they want in life. Due to their resourcefulness, they will also work extremely hard to make their relationship a success. The two are also attentive and will be ready to listen to each other’s views and ideas.

The Dragon and Monkey are quite companionable. The Dragon loves to be out of the house at all times. While out, he or she meets a lot of people he engages with. Dragons thrive through constant social exchanges. On the other hand, the Monkey is a master of the art of talking to people. He or she always knows what to say and when to say it. Through socializing, he or she is able to show their wit or sophistication. Since both are quite sociable, they will have a large circle of friends. Sometimes they will go out with their friends. While out with friends, they will drink and dine with them. Due to this, the Dragon Monkey compatibility will rarely be a boring one.

Both are Quite Relaxed

The Dragon and Monkey slack when it comes to their ways of doing things. They will, therefore, not be very interested in doing home chores. Although this might look like a disadvantage for them, it actually works perfectly for these two. They love a nice mess as they rarely have the patience to clean up. They will be comfortable with their home the way it is. Neither will bother the other one with home chores.

The Dragon Monkey compatibility looks very workable. However, there are a lot of things that will affect their relationship. Let us have a look at some of these problems.

One major problem for the Dragon Monkey compatibility will be their risk-taking traits. Neither of them is scared of trying something new, whether it is in life or at work. The Dragon does not hesitate to go out and test his luck. The Monkey also lives on the edge. He or she also finds fun in trying different things. Therefore, a safe and predictable world is not for these two. This common trait can pose a great danger for their partnership. This is because they will be quite vulnerable to losses. If the two fail to regulate their behaviours, their home might be open to misfortunes and insecurities.

The Dragon and Monkey are quite egoistic. The Dragon believes that he or she is always right. They then expect everybody around them to follow their decisions and views. The Dragon can be arrogant to those who try to go against them. On the other hand, the Monkey perceives the Dragon as a know-it-all. It does not matter what other people say, but the Monkey believes they have better ideas. Due to this shared egoistic nature, the two will occasionally clash, especially when they have opposing views. For this compatibility to be a successful one, the two will have to learn how to listen to what the other has to say.

The Dragon Monkey compatibility is very workable. This will be because the two have a lot in common. Both love living a fun, exciting, and exhilarating life. They will enjoy each and every moment they spend out of their house together. Both are also quite determined and optimistic. They will hereby work extremely hard to create a successful partnership. Despite this, there are several issues that will come between them. These issues will mostly be caused by their egoistic nature. However, such problems are small for them. They should then be able to solve them quite easily.