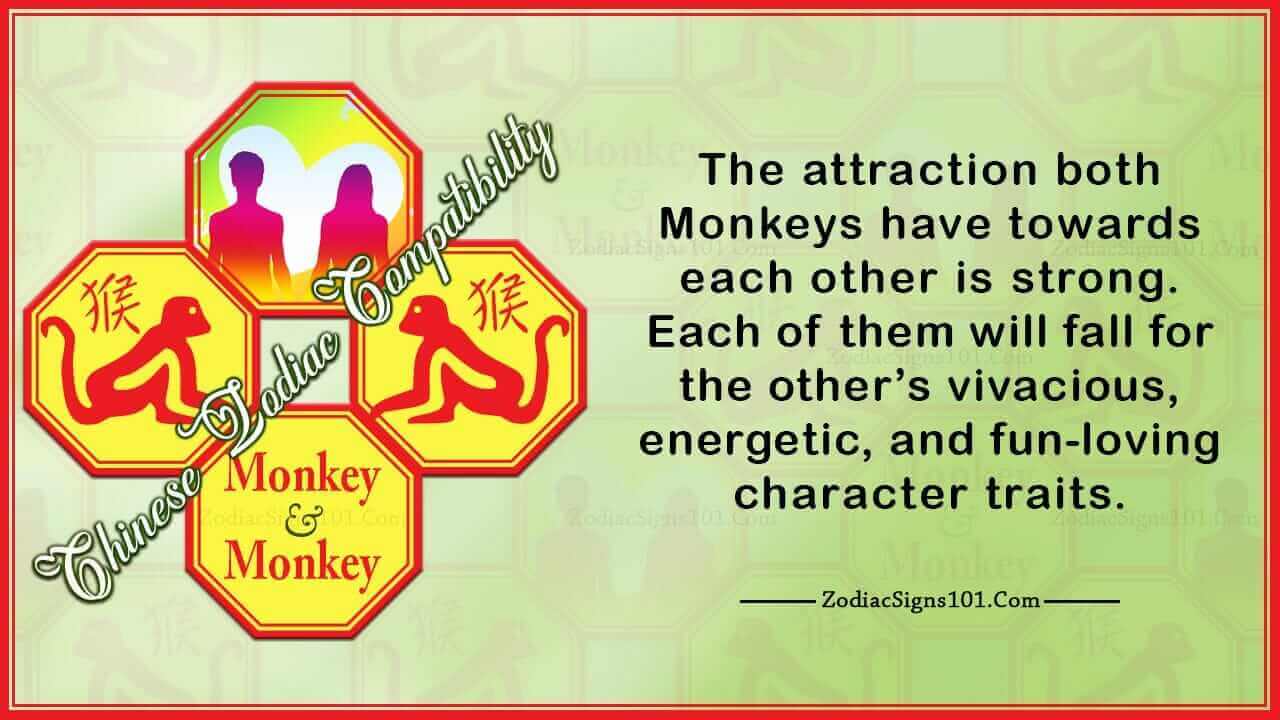 A Monkey Monkey compatibility brings two lovers who share the same Chinese Zodiac sign. This means both have most, if not all, things in common. Their similarities go a long way when helping them create a fulfilling and exciting relationship. Inspired by their common sociability and love to have a good time, they can keep each other exhilarated. However, there are questions about whether they might find themselves too alike. Common traits like jealousy and egotism are likely to hinder their quest for a happy relationship. This article looks at the Monkey Monkey Chinese compatibility.

The attraction both Monkeys have towards each other is strong. Each of them will fall for the other’s vivacious, energetic, and fun-loving character traits. When together, they will have constant happiness and excitement. They have a common love for new interests, people, and places. They will, therefore, be happy to go out with each other. This strong attraction that exists between them will set the foundation for the success of their relationship.

Since the Monkey Monkey relationship brings together two lovers of the same Chinese Zodiac sign, so both have a lot in common. Both are joyous and search for activities to take part in away from the house While out, they meet people and do fun activities so they go out once in a while to new restaurants or other fun places. In addition, both are energetic and will participate in thrilling outdoor activities. The shared attributes help them keep one another happy. This will go a long way in strengthening their bond. Monkeys also love to participate in social activities where they can exchange opinions, ideas, and information. They are curious to know more about things. In fact, their amiability is one trait they use to impress or even manipulate those around them. This common love for interacting is a factor that makes Monkey partners are perfect for one another.

When two Monkeys are in a romantic relationship, they are likely to form a fulfilling and satisfying sexual bond. Since both are fiery and energetic, their lovemaking is filled with a lot of intensity. A good physical relationship is an attribute of a successful relationship. Due to their affectionate and physical connection, the Monkey Monkey compatibility will have high chances of success.

The Downsides to the Monkey Monkey Compatibility

Just like other relationships out there, this one will not lack its own problems. This part of the article looks at potential issues likely to face this love match.

Monkeys think more about themselves and less about other people. They set personal goals and are ready to do anything to accomplish them. Since Monkeys are self-seeking, they usually have little regard of those around them. Another thing to note here is that Monkeys can be egoistic. Due to their vast knowledge and experiences, they believe they are always right. They expect those around them to follow their decisions without question. Now, when they come together, whose ideas and opinions will be implemented? Due to this, they are constantly faced with arguments and disagreements. They will have to work on their ego if they want to create a successful love match. Also, they need to focus on one another instead of themselves.

Another issue two Monkeys are likely to face in their relationship is a lack of commitment. Despite the fact Monkeys are seen to be as resourceful and hardworking, they have a short attention span. This is more noticeable when they are in a romantic relationship. They find new interests as quickly as they lose them.

Although two Monkeys might understand each other, they might end up forming a temporary relationship. Monkeys have a strong desire for engaging in new things and experiences. Therefore, it can be easy for them to veer off their relationship when this desire is not fulfilled. Unless there is something to hold them together, a break up is likely.

Due to the varied nature of the Monkey, there is likely to be a lack of trust in a Monkey Monkey relationship. One can never know when the other might decide to extend a simple night out with friends to a whole weekend spent out of town. Due to this, it might be hard for them to fully depend on one another. When they are dating, both will have to adopt some form of stability. This will be the only way they can have a happy relationship.

When two Monkeys come together in a relationship, two things are likely to happen: success or failure. Since they have a lot in common, they develop an understanding and respect needed to create a successful relationship. On the other hand, due to traits like egotism, a common love to be in control, and love for diversity, their partnership might not go for. This is because they are likely to fight over control. In addition, there might be a lack of trust and respect in their relationship. As a result, to make this romantic bond work for them, they have to put in a lot of effort.