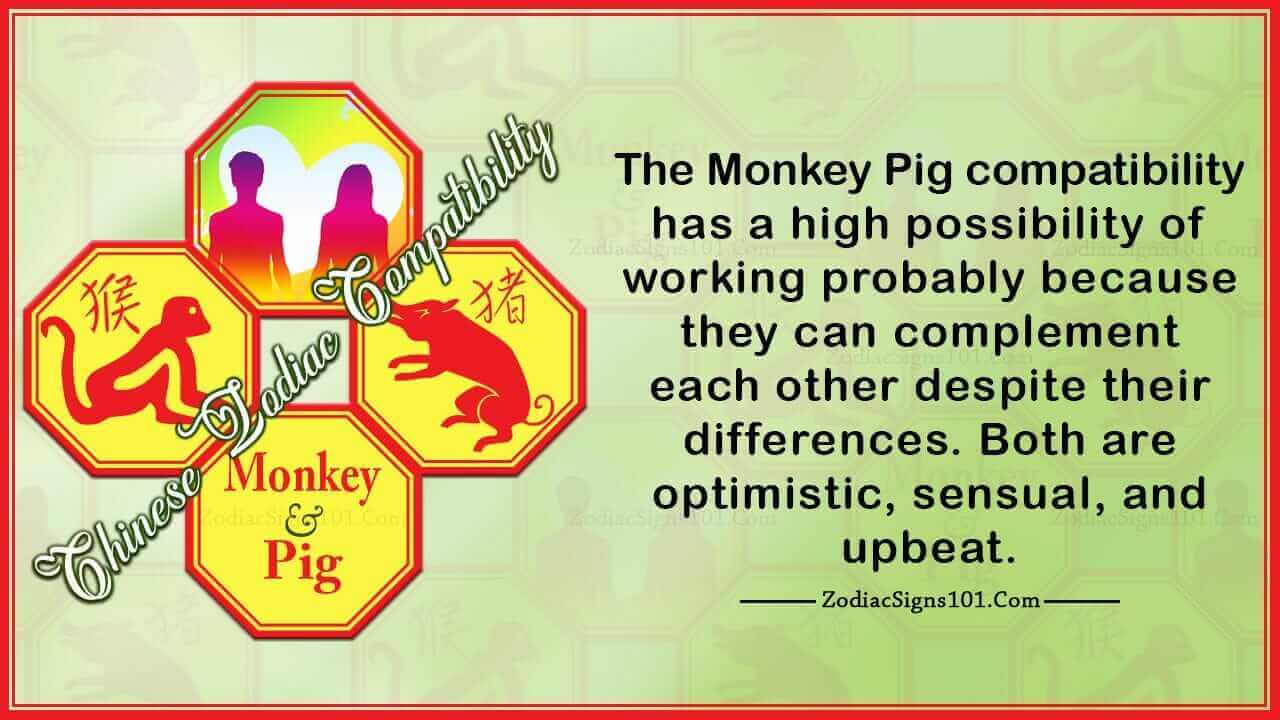 The Monkey Pig compatibility has a high possibility of working probably because they can complement each other despite their differences. Due to this, they form a relationship filled with fun and excitement. They entertain one another in every way they can. Although, their distinctions are likely to set them apart. They, therefore, need to put in the effort to create a happy and wonderful relationship. This article looks at the Monkey Pig Chinese compatibility.

The attraction the Monkey and Pig have towards each other is strong. Each of them will fall for the other’s different and wonderful positive traits. The Monkey will be fascinated by the Pig’s loyalty and humility and will make sure nothing goes wrong between them. The Monkey is loyal and would never cheat on the Pig. On the other hand, the Pig will be fascinated by the Monkey’s sociability and gregariousness. The Pig will also love the Monkey’s love for adventure and exploring. Owing to this fact, the Pig will join the Monkey in their numerous expeditions. The Pig enjoys every moment they spend with the Monkey while out of their house. This strong attraction between them will set the foundation for the success of their relationship.

Although it is said that the Monkey and Pig are different, they still share some similarities. For starters, both are optimistic, sensual, and upbeat. They are in search of new experiences. Due to this, they leave the house to enjoy life. While out, they engage with other people and make new discoveries and places. Looking at this, their relationship will be exhilarating and full of fun. Additionally, the time they spend outdoors helps to strengthen their partnership.

They Complement Each Other

Since the Monkey and Pig are distinct, they have the potential of complementing one another perfectly. The Monkey will bring their outgoing nature and through this, the Monkey can bring fun into their relationship. They do this by taking the Pig out frequently. Moreover, the Monkey is creative and intelligent so they come up with a lot of ideas the Pig will appreciate. On the other hand, the Pig is easygoing, humble, responsible, and loyal. They can grant the Monkey a sense of responsibility. Furthermore, the Pig is giving and works hard to fulfil the Monkey’s desires. As long as they continue like this, chances are, they could emerge victorious in their relationship.

The Downsides to the Monkey Pig Compatibility

Due to the many differences between the Monkey and Pig, there are issues that face them in their pursuit for an ever-lasting romantic bond. This part of the piece looks at the potential downsides of being in a Monkey Pig relationship.

The Monkey and Pig differ. The Monkey is sociable, amiable, and outgoing so they love to be out whenever possible. While outdoors, the Monkey explores different things and participates in social exchanges so they can be found in large groups at a club or party. The Monkey’s lifestyle is something they never compromise. On the other hand, the Pig seems reserved so they are not interested in being with people. 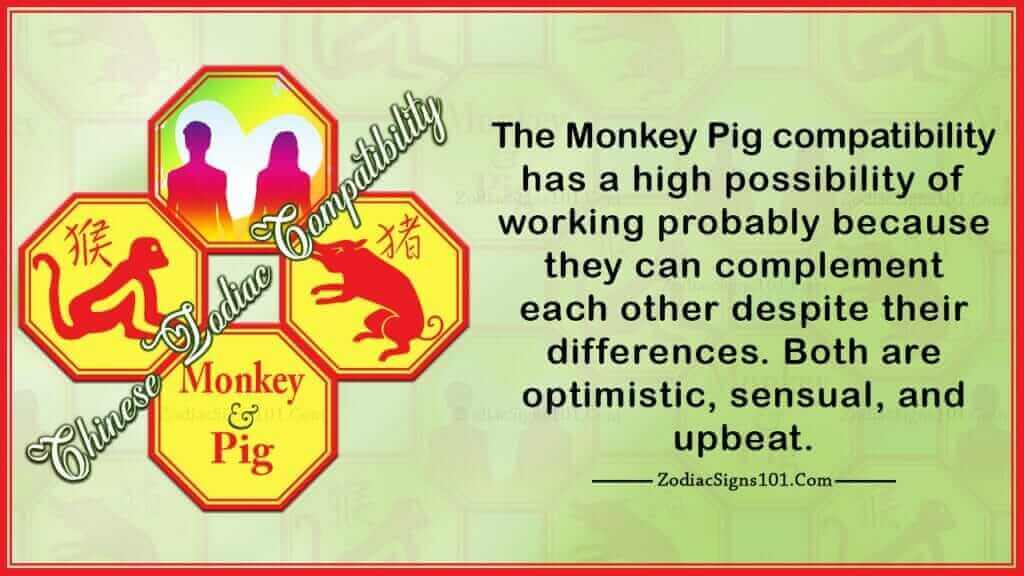 The Pig is satisfied with a small group of individuals like family and friends. Due to this distinction, the two have a hard time getting along. They have distinct ideas about how they should spend time together. The Monkey suggests they go out to a club while the Pig suggests they go to a quieter place and have a romantic evening together. For this relationship to work out, they have to find common things they can enjoy together.

The Monkey and Pig operate on two distinct emotional levels. The Pig is highly sentimental so they love to be pampered by their partner. The Pig thrives on constant reassurance from their mate. However, the Monkey lives more of a superficial life. They are always busy and usually have little time for feelings and emotions. When getting into a relationship, the Monkey looks for new experiences instead of an emotional connection. Due to this, the Monkey might not be in a position to grant the Pig the emotional protection they want. Due to this, the Pig might choose to look for another partner that will be more concerned about their feelings. For this love match to be a successful one, the Monkey has to up their game and show the Pig more commitment and devotion.

The Monkey Pig compatibility looks to be on the average side. Their relationship can work or fail drastically. It can be successful as the attraction they have towards each other. This attraction can create a foundation for their relationship. In addition, they do share some similarities. Where they seem different, they can complement one another. Despite this, the Monkey and Pig are still different. They find it hard to get along. Therefore, they need to put in work to make their union successful.