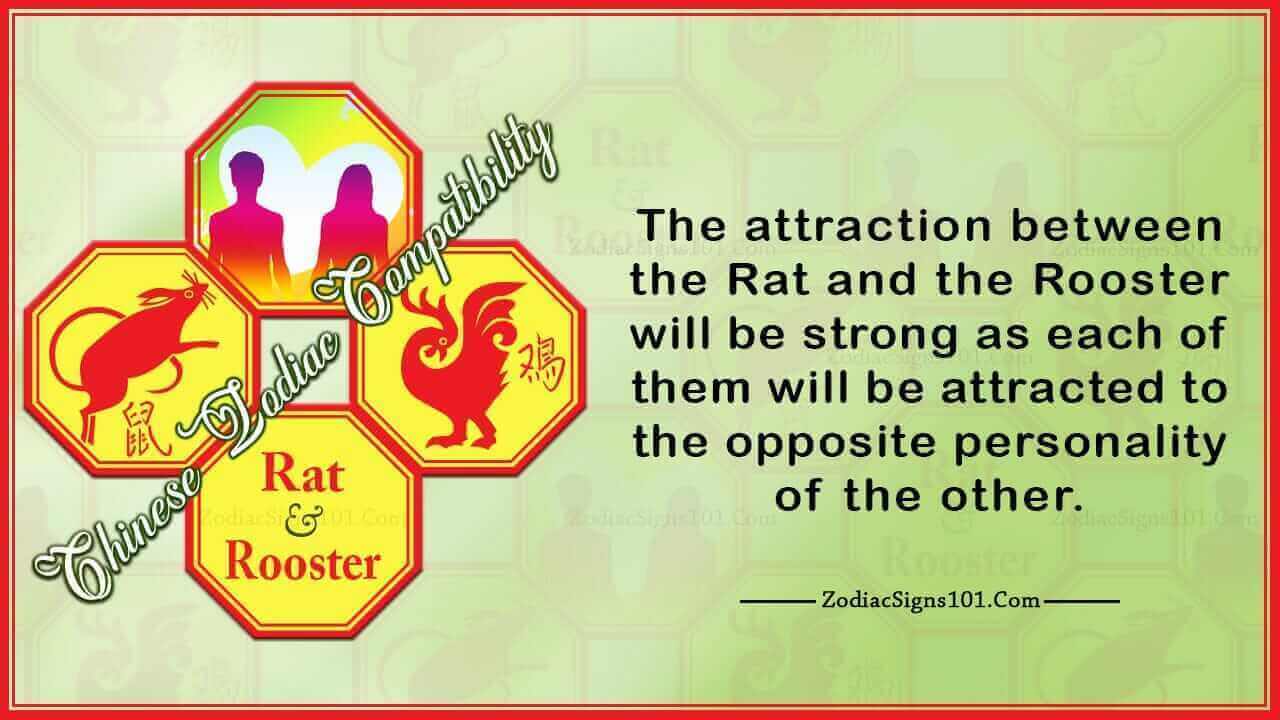 The attraction between the Rat and the Rooster will be strong as each of them will be attracted to the opposite personality of the other. If the Rat is male, he will be fascinated by the tenderness and affectionate nature of the female Rooster. He will also fall for her dedication and commitment to succeed in everything that she does. Moreover, he will find her caring attitude towards others to be appealing. On her part, the female Rooster will not fail to notice the carefree and sociable nature. She will love to listen to his many stories and ideas.

On the other hand, the attraction will still be strong if the Rooster was a man and the Rat was a lady. The Rooster is attracted to the companionable and jovial qualities that the Rat lady holds. On her side, the Rat lady will be attracted to the stable and caring character of the Rooster. The strong attraction between them will create the basis for the success of their partnership.

Although the Rat and Rooster are quite different, there are some things that they have in common. First, they are both caring and compassionate. They will satisfy each other’s needs and expectations generously. In this relationship, the Rat will be ready to meet all the physical and emotional needs of the Rooster. On the other hand, the Rooster will take great care of the Rat in all aspects. In addition, the Rat and Rooster are both good at making and using money. Their partnership will hereby be faced with minimal cases of financial instability. They will form great business partners and this will be very healthy for their relationship.

The Downsides to the Rat Rooster Compatibility

The Rat Rooster relationship will be met by a lot of issues. Most of these will come up due to the many differences between them. Let us have a look at some problems that will face this relationship.

The Rat and Rooster have distinct personalities. While the Rat is outgoing and sociable, the Rooster is usually calm and withdrawn. Rats are great talkers and secretive and can be, at times, viewed as “schemers”. This trait will not be in line with the truthful nature of the Rooster. The Rat and the Rooster will simply have a hard time getting along with each other. The Rat will prefer spending time out of the house. While outside, the Rat can make new friends and discover new things. Rats get along with people quite well and love spending time with them.

In contrast, Roosters are homebodies. They do not see any fun in relating to other individuals. They live their own life and love it this way. This personality difference will cause a great division between them. For this partnership to be successful, they will have to work on these kinds of distinctions. The Rat will have to adopt some form of stability. This will enable the Rat to stay at home once in a while and spend some time with the reserved Rooster. On the other hand, the Rooster will have to learn to enjoy a more social life. The Rooster will now be able to join in the Rat’s expeditions and explorations. When they engage in activities together, they will be able to create a strong bond between them.

The Rooster is Scrupulous

Roosters are fastidious and love to ensure that everything around them is in perfect order. However, Rats are usually careless and do not like to handle things around them. They are hoarders and everything around them is messy. If these two get into a relationship, the Rooster will want the Rat to make some lifestyle changes. Roosters are sensitive about neatness and public image. The Rooster will thereby want the Rat to look perfect and ensure that their home is in good condition as well. Will the Rat be ready to make these changes? The Rat will see the Rooster’s actions as being obsessive and will not be willing to make any changes. This can cause serious issues between them.

A lot of work from both the Rat and the Rooster will be required if at all the two want to make their relationship successful. The two have numerous differences that will set them apart and probably lead to the end of their partnership. Nevertheless, there are some things that can attract them to each other. The Rooster will fall for the outgoing, carefree, and sociable nature of the Rat. On the other hand, the Rat will fall for the Rooster’s tenderness and caring nature. In addition, they share some similarities. They are both committed and devoted to each activity that they engage in. They can put in the needed effort to make their partnership successful. For the Rat Rooster compatibility to be successful, the two will have to make a lot of sacrifices so they can achieve harmony and unison in their union.