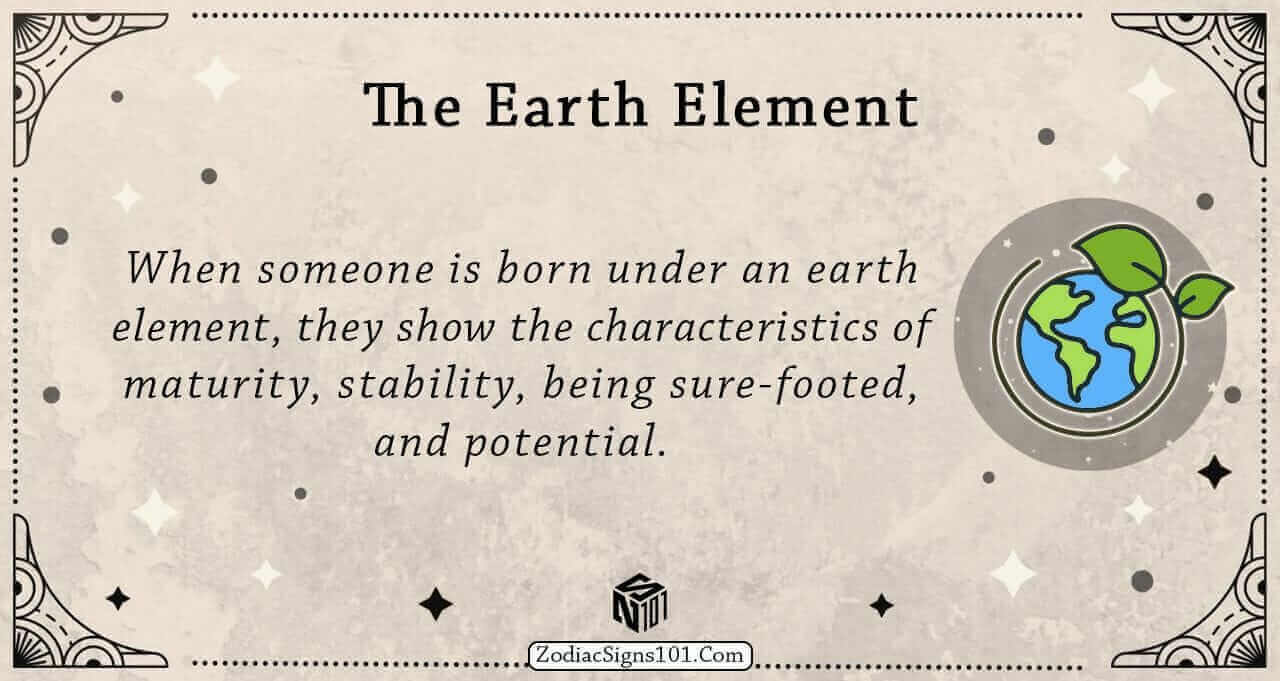 It can be debated that not enough thought is given to the main four elements. What other things these basic four allow humans to have and to work with. Earth, fire, water, and air are so important on countless levels. The earth element is the topic of this article.

Earth, on its own, gives humans so much. After all, it is not just an element but it is also the planet we live on. It gives us food, the means we need for living, and so much more.

This article is not an essay on Earth in alchemy or chemistry, but rather the importance of Earth in symbolism, what zodiac signs are affected by Earth, and how Earth coexists with the other elements.

All life comes from earth–one of the most important elements. When someone is born under an earth element, they show the characteristics of maturity, stability, being sure-footed, and potential. Earth also gives birth, death, and rebirth. Despite what some people might think, the earth is a feminine element- it gives the foundation for the birth of all living things.

Virgo, Taurus, Capricorn are of the element earth, and it shows. These signs are calm, grounded, salt of the Earth kind of people. Rather than dreaming all the time, they are all practical and prefer to have their feet on something more solid and firm.

These signs are also described as being the roots of things and productive. If these signs do not have a balancing force, however, then they can become stubborn, petty, workaholic, hoarding, and more or less stuck in an endless rut.

While all of these signs are of the element earth, that does not mean that they are all the same. They are also differed by their qualities. For example, Taurus is Fixed; this means that they are most like Earth in that they are fairly unmoving. On the other hand, Capricorn is Cardinal which means that are the most likely of these three signs to give up some of the stubbornness and come to an agreement with other signs. Lastly, Virgo is Mutable meaning that they are the most unpredictable of these traits. Virgos do not always follow the set-out personality their sign gives them.

How Earth Interacts with the Other Elements

If two earth signs (Taurus, Capricorn, and Virgo in any combination) are friends or lovers, then it is likely that they are friends for a beneficial reason rather than for emotion, relation, or sentiment. So if they were to date, instead of being attracted by romance they might be brought together by chances for economic betterment.

With two earth signs working together- on anything- not a detail can be missed by this pair of schemers. They can indulge themselves and each other in the senses around them but things can take a turn for the worst if they are not careful. They can get lost in the aspect of tomorrow and forget that they still have today left.

When people think of earth and water signs (Cancer, Pisces, and Scorpio), one tends to think of mud. That is not the case when these two people of these elements come together, it really is a beautiful relationship. These two elements together show that friendship and/or love is important than anything else; then money, or status, or background. They help each other to get to where they need to be.

Waters are gentle enough that they can slowly get Earths to lighten up on different things. Water nourishes the Earth which can make the earth sign feel less alone and help to become more in touch with emotions.

Earths give waters the means they need to complete tasks by leading them or giving them a firm surface to stand on their are unsure of something. Waters need Earths to help them to really get a task started sometimes; perhaps the water has an idea but is not sure on where to begin.

A friendship between earth and fire signs (Leo, Aries, and Sagittarius) elements is one of dedication and inspiration. Fire needs wood to burn; earth needs fire to help keep it fresh. They continually feed into each other to keep the other going with ideas in a plethora of fields.

Fires can inspire earth sign to leave their small field of comfort with their own excitement, but the Fires have to be slow about getting the Earth out of their safety zone. Sometimes fires can be a little too much for earth signs because of how fast-paced and moving they are.

Similar to how earth signs can keep water signs going by giving them support, fires can need guides as well. When they have an idea for something going, they can let it out full swing but not have anything to do it. Earths can give advice on where to start and backup or some Earths stay right alongside the Fires and see the project through.

Earth is hard and driven while Air (Libra, Gemini, and Aquarius) is flowy. Together they can make an amazing team that is all but unstoppable. Air has the ideas and takes the lead while earth signs are the workers that can see the ideas become tangible. They power each other so things are accomplished.

Airs can give earth signs peeks into their worlds; into their imaginations and less logic driven minds. They can introduce maybe a new book or movie series to get the earth signs to calm from their stubborn sides of everything needing proven facts.

Earth signs,  on the other hand, can help with staying on the ground. If an air sign gets too fast or flighty, then the earth sign can more easily tether them. Earth signs should be careful when doing this because  air sign can actually find it suffocating if things are moving too slow. Air signs will have a respect for how long it takes earth signs to get moving, but they themselves are dragging their feet to let the earth signs catch up.

Earth is strong, sure, and providing. People born under the earth element are down to earth, calm, level headed, and willing to help and support others. They can sometimes be seen as the worker bee but without the sting. They are patient and kind.

Earth element people are ruled by logic rather than emotions or gut feelings; everything has to have a why and how in order for it to be seen as important. So even though earth signs are not driven by their emotions, it should be kept in mind that they are still crafty, incredibly in tune with their senses, and are generally more likely to enjoy slow and gradual change.