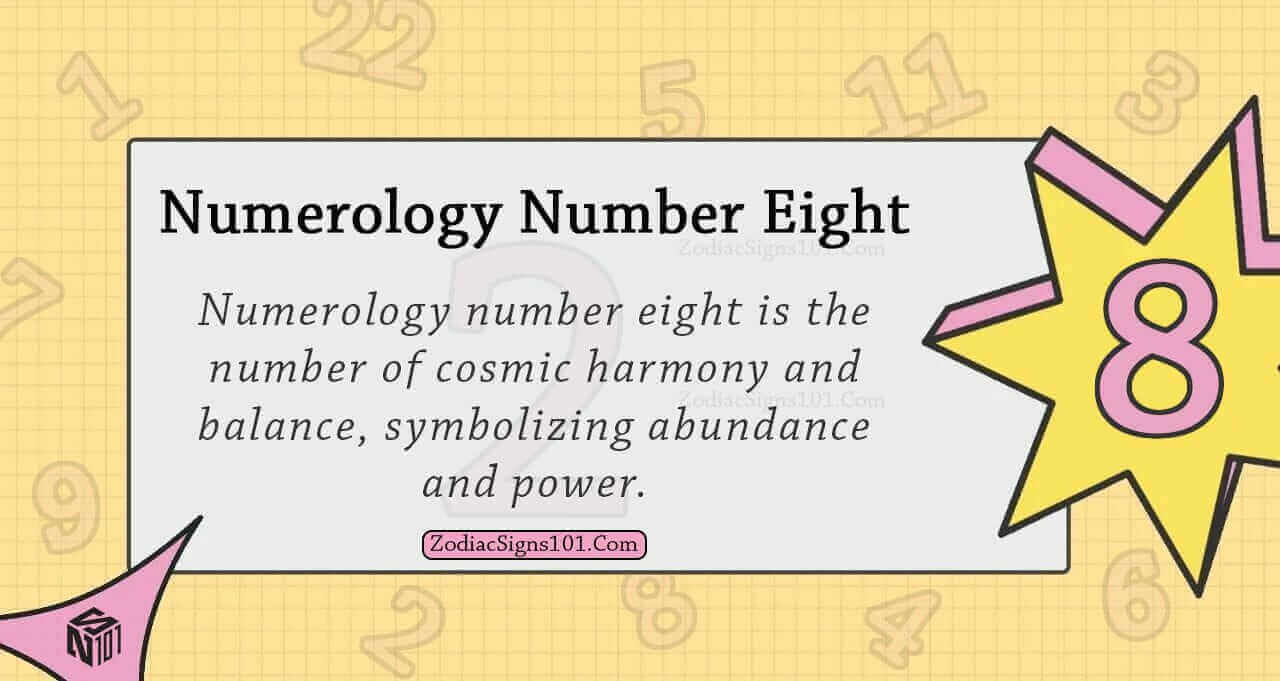 Numerology number eight is the number of cosmic harmony and balance, symbolizing abundance and power. It is the Ogdad for the Pythagoreans, a little holy number as the symbol of the first cube that has eight corners. When number eight is mentioned, many ideas come to mind, Ut is the number of all the natural laws for the native Americans; the eight spokes of the wheel of law, symbolizing the eightfold path to enlightenment for Buddhists; and the eight immortals who mastered the way for the Taoists.

In the Judeo-Christian bible, eight is the symbol of completeness. The eighth day is that of resurrection, representing a new beginning for the world, a symbol of new life. More importantly, God chose eight men, who gave us the chance to have the new testament in its written form: Luke, John, Peter, Jude, Paul, Matthew, Mark, and James. 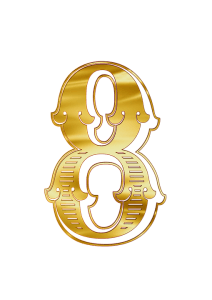 Since eight symbolizes the principle of domination, numerology number eight people are stern and formal, and, being highly organized, they are endowed with natural know-how to achieve their goals. They are comfortable in a world of material tangible facts. Number eights their whole might to get the life they seek, the life of wealth and money, focusing just on the big ones.

Extremist numerology number eight people are a kind of gold-diggers, manipulative blood-suckers who try to control their workplace with the use of an iron hand. That is, some of these people are ruthless and materialistic. They can be very opinionated that it might be the eighth wonder of the world that they accept advice from other people. Sometimes, they can be so egoistic that they, even, never consider the option of being on the wrong side, following their hearts and minds at the same time.

Numerology number eight people are the bosses of their self-managed businesses and workplace, the lawmakers and the states’ legislators. They excel in all the jobs where passion must not be involved with reason in decision making, like judges and supervisors. Numerology number eight people are very good at many other careers, as teachers, project managers, and corporate executives. In brief, these people preferably function better in positions of authority or self-employment.

Some numerology number eights are not to talk to unless you have a business to do with them. They don’t have time for the hustle and bustle of life, and they won’t care for your thoughts and feelings. That is to say, if you are a numerology number six-person, just disinterested in the materialistic world, and it happens that you should meet one, just run for your life. They can never ever be disinterested. They love money, money, and money.

A big number of numerology number eights are more of egoists, so proud that they are in constant fears of speaking their mind out, concerning love and relationship lest they are rejected. That is, they won’t initiate any topics about intimacies and love unless you do it first. Because of their personal characteristics, being workaholics, rarely sparing time for romance and personal life, they neglect the idea of being involved with partners. Even if they have their pairs, they face the problem of failed romantic relationships. Therefore, this numerology sign can make perfect partners with numerology number two people and numerology number four people.

As a numerology number eight-person, your life purpose is walking the path of a business-minded leader. Mind you, numerology number eights, have a couple of lessons to learn. It is crucial that they are what they just need to lead their cheaps ashore, successfully reaching their highest assets. The material world alone is certainly not enough for their well-being. Number eight people might feel as if set on fire, disoriented unless they work through some of their negative characteristics. Their ultimate goal, hence, being a little focus on balancing between their materialistic world and spiritual universe, using their power for good.

Your soul won’t rest until you can be what your heart’s desire wants. This is your destiny too. You are powerful, surely having what it takes to achieve your goals. A powerful heart ablaze pushes you to reach the impossible star you are seeking. Still, for your well-being and for a happy, meaningful life, you have to learn something about personal power. Respecting other’s powers by not taking it from them, nor manipulating them can go a long way. A little compassion for people around you is very important to overcome barriers. Digging ocean of deep wisdom, sharing happiness with others, helping the needy and guiding the disoriented will all improve your life.