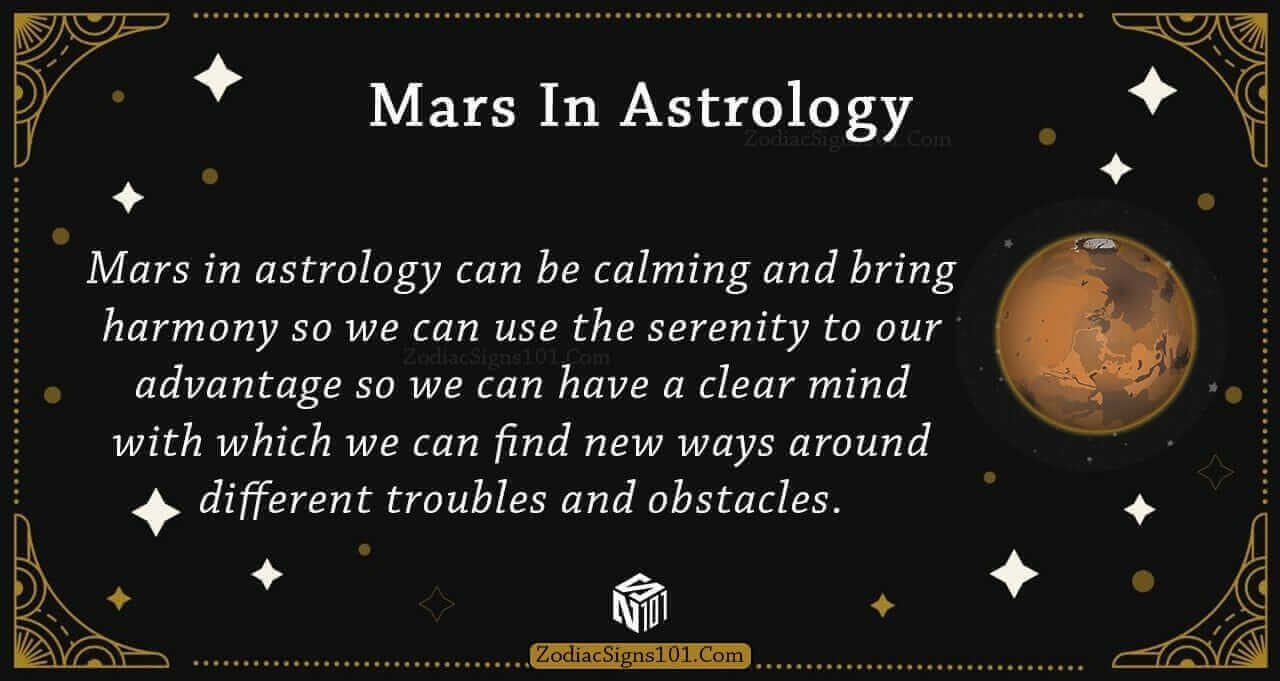 Mars in astrology rules over Aries and Scorpio. It is also what gives people their drive and determination and in some cases their passion (though passion also comes from Jupiter). It is true that Venus rules over romantic needs or wants, but it is Mars that rules over sexual desires. Mars in astrology gives people the “unattractive” emotions. Those of anger, fear, aggression, and so forth. Some people have a fight or flight reflex and that too comes to Mars. Competitive sides of people also come from Mars, as do the impulsive urges.

Mars is referred to as the “Red Planet”. However, the planet is not entirely red. Instead, it just appears red. The reddish glow that is seen is from the rust on the surface of the planet. Astronomers tend to have trouble getting things close enough to really see Mars because the atmosphere is so thin.

People who get their courage and spirit from Mars might feel rather sad or let down during the two months or so. The courage that Mars in astrology gives can also keep away self-doubts so when Mars is in retrograde people can really have some problems with inner confrontations.

Mars in Astrology: the Elements

The Zodiacs under Air are Gemini, Aquarius, and Libra. When Mars works with Air the people are remarkably driven and they have quite a few interests. People guided by Mars in Air are amazingly crafty at getting what it is they want or need because they are able to quickly adjust to new changes and they are usually very polite.

The Fire Zodiacs are Sagittarius, Aries, and Leo. It is rare to meet one of the following that is not lead through life by passion. They can have a bit of a temper and the people around them are sure to know it before long. The three aforementioned Zodiacs are good at getting what they want like Mars in Air but in a different way. While Mars in Air might have a sturdy plan set, Mars in Fire burn their own path. When they want something, they want it now and they are not very willing to wait or to take the time to develop a steady plan.

Water Zodiacs are Pisces, Cancer, and Scorpio. These three are great at strategy, they are instinctual, but they are also a tad emotional most of the time. They feel these feelings but do not always know what to do with them. Mars in Water people are not nearly as flexible as Mars in Air when it comes to planning, but they get by with what they have and take patients to get what they want when they feel or know the time is right.

The Zodiacs under Air are Virgo, Taurus, and Capricorn. While Mars in Fire, Water, and Air can give into their emotions rather simply, Mars in Earth is less likely to do that ( least of all with anger) Being of the element Earth, they are rather grounded and firmly footed, so they are most emotionally stable than most of the other Mars in elements.

How Mars in Astrology Affects Personality

Like how Venus gives all people- even males- female energy, Mars does the same thing but with male energy. Mars in astrology is typically the planet that leads people to find the sexual orientation that best fits them and from there Venus takes over. People who are guided by Mars have strong and raw emotions. However, they like to hide these emotions. These people are also adventurous, forceful, directed, rash, impatient, blunt, and impulsive.

Mars in astrology is an interesting planet because how the planet guides the person is mostly up to them. They can let the destructive side of Mars take over or rule with the constructive side. The odd thing is that sometimes these sides lock together. When this happens, people can be helpful to others and destructive to themselves or vise versa. It is important that they find some sort of a balance because otherwise, it could be the downfall of themselves and the people around them.

At times people have trouble getting out of the bed in the morning. This is not always because they are lazy or feeling down. Sometimes it is because they simply have nothing to do. With Mars in astrology leading them, though they are better able to find a reason to be productive during the day. Competition is a great motivator for people with Mars in their charts. Mars can give them that.

Mars brings positive energy and or emotions. Mars is not just about anger. From Mars, people also get their courage, stamina, and passion. Despite the planet having been named after the god of war, people guided by Mars want harmony at times like everyone else. This harmony helps them, even more, when they can get it because helps to add even more stamina. When someone has peace of mind, there is little that can stop them.

Mars in astrology gives one stamina and drive. This makes finding the perfect career easy. Some ideas might be labor forces, weapons or metals trading, army, industrial or electrical engineering, or police (or detective) work.

Mars, having been named after the Roman god of war, gives us our strongest and rawest of emotions as well as our fight or flight reflexes. This planet is what gives us out courage, drive, some of our passion, and oddly enough, our sexual drive. Depending on what element your Zodiac sign is under, everyone has different ways of getting what it is they need or want. Mars in astrology can be calming and bring harmony so we can use the serenity to our advantage so we can have a clear mind with which we can find new ways around different troubles and obstacles.